This hobby is too complicated for me 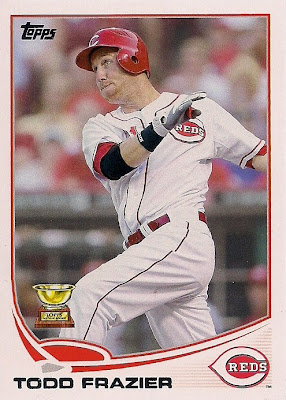 I almost didn't write this post because I spent too much time ripping up all my Carlos Quentin cards.

But at about the same time the Padres dimwit was showing everyone exactly how ignorant he is about, well, everything, brainless Night Owl was undergoing a revelation himself.

In the last post, I listed my favorite cards from Series 1 of 2013 Topps. One of the cards on the list was the Todd Frazier card.

Not the Frazier card up top there, although it's perfectly spiffy in its own right. I considered it one of the best cards out of Series 1 so far.

But it turns out that this isn't a regular, old Series 1 card. It's one of those "out-of-bounds" short-prints. I was alerted to the fact on Twitter, right about the same time Matt Kemp was going understandably ballistic.

But I should have turned over both cards to realize that's not the case. Both cards are No. 70. Which means: hello, short-print!

But I had to go to the list to make absolutely certain anyway.

I knew this was going to happen. When I found out that there were short-print cards of players making plays in foul territory, I thought instantly, "there's a good chance that I'm going to pull one of these cards and not even realize it."

I know myself so well.

Topps doesn't make it easy. Not only are there short-prints in the first place, but it does that rookie cup thing that I just mentioned, AND it adds a bunch of regular old base cards in which the players are shown making rather spectacular fielding plays.

And we're supposed to differentiate between all of that.

Once again, and I've said this many, many times:

I HAVE A FULL-TIME JOB.

Now, I'm not complaining too much. I should be able to fetch something decent for the out-of-bounds SP (I also happened to win a second one a couple days ago, so now I'll have two to deal with as I see fit).

But, really, I'm starting to think maybe this hobby is getting a little too complicated for me.

I guess one good way to uncomplicate things is to relieve myself of some cards from my collection.

I've started with this one: 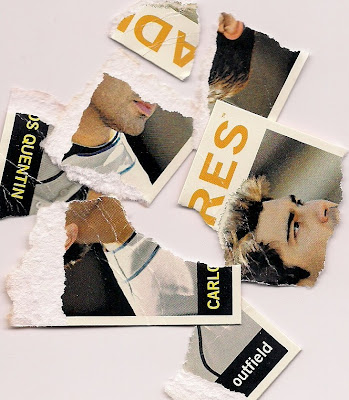 hiflew said…
I came tonight hoping to see a torn up Carlos Quentin card and there it be. Tough break (no pun intended).

Onto the topic, I don't have many 2013 Topps cards. ATM, I have only procured the Rockies and the Rookie Cups. I did notice the Frazier was different than mine, but I also assumed a second base card was the reason. I wonder how they will mess with us next year, perhaps throwback uniform short prints. Somewhere a Topps executive is lighting a cigar with a hundred dollar bill and smirking.
April 12, 2013 at 3:41 AM

deal said…
This is where the SPs bother me - I could see the same thing happening to me.

The player on the front of the card should matter more then some some little verification number on the reverse of the card buried at the bottom.

Doc said…
I've been ranting about SPs for the last week or so. Short of self-identifying them so I can trade/sell them for vintage, I care not for the beastly little things.

I saw somewhere that those '09 Pie in Face SPs were selling for over a $100. Sick and stupid.

Nick said…
I've simply given up with the SPs. Although it doesn't always work, I just try and put them out of my mind.

If they used those "out of bounds" shots for an insert set or something, I'd probably collect them. But Topps using them on massively SPed cards is awful.
April 12, 2013 at 1:26 PM

I hate Topps for SPs.

I loathe myself for being fascinated by them.

I love the photo of the Quentin card for summing up my feelings of a worthless piece of trash.

I pity San Diego baseball fans for having such a grease spot representing their team.
April 12, 2013 at 1:54 PM

Roy-Z said…
I traded a bunch of unneeded base cards for the Lawrie SP, mostly because it personifies him so well.

Commishbob said…
I swear I can't believe anyone actually tries to collect a modern Topps set. It's f'ing madness.
April 12, 2013 at 7:24 PM