My simple tribute to Jackie 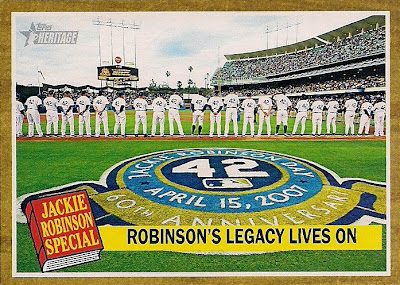 Every year at this time I go to a card show. It's usually right around the anniversary of Jackie Robinson's major league debut, which happens to be today.

Since Robinson's memory is so prevalent at this time, I decided that I would try to acquire a new Robinson card every time I went to the show.

And not only have I been able to do that for most April shows, but I've been able to do it for the other shows I go to during the year. It's my little tribute to Jackie.

It's really not that challenging of a task. As you know, Topps keeps churning out Robinson cards as if he was still putting on a uniform today. In fact, I actually put a Robinson card that I didn't have BACK into a dealer's box yesterday because it was the same damn pose that I have seen so many times before.

But I did pick up one Robinson card at the show. It's the card you see here.

This card is from the 2011 Heritage set, the special short-print parallel set that paid tribute to Robinson. Out of the 10 cards in the set (I think I have 4 or 5 of them now), it is my favorite one.

Robinson means as much to me as Robinson can mean to a white man who grew up in the 1970s knowing players like Jimmy Wynn, Garry Maddox, Vida Blue, Joe Morgan, Manny Sanguillen, John "Blue Moon" Odom and George Scott. I grew up in an integrated world, but I've tried to learn what it used to be like in Robinson's day.

People who can't tell you what "strike one" is can tell you who Jackie Robinson is and who the Dodgers are.

I am very proud of that. No matter what kind of problems, flaws or errors my team or my sport has, they will always have April 15, 1947.

And that is why I'll always keep trying to accumulate Robinson cards -- even the cynical modern Topps ones of the same poses I've seen 100 times before and even those legitimate 1950s ones that cost more than a player made in a week back then.

I haven't seen the movie "42" yet. I plan to go next weekend. I think it has received moderately positive reviews. But I know I will like it regardless of reviews. My team and my sport will be on stage again for its greatest moment.

Play at the Plate said…
True greatness is immeasurable. Jackie Robinson is greatness.
April 15, 2013 at 4:00 AM

deal said…
great post - I have never seen that card before. and it is a truly remarkable one.

Marcus said…
Great post. He means about as much to me as he can to a white kid growing up in the 90s.

Always great when excellent athletes are also extraordinary human beings. My first report on an athlete in school was Jesse Owens when I was in 2nd grade, another great athlete and example.
April 15, 2013 at 9:31 AM