April 30, 2013
(Welcome to National Honesty Day. Yep, to balance out the first day of April -- a day for lies -- the last day of April has been reserved for telling the truth. In the spirit of that, here is my bit of honesty:  I don't understand 80 percent of what's on Twitter. So there you go. Time for Cardboard Appreciation. This is the 182nd in a series): 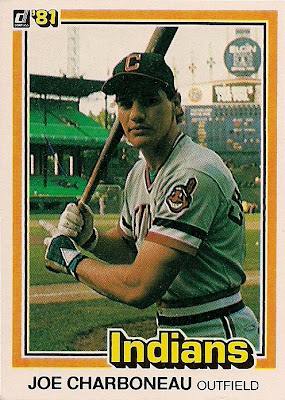 If you were lucky enough to experience the major league baseball season in 1980, you know the first half of the year was consumed by a man named Super Joe Charboneau.

Charboneau was a one-year rookie sensation. He was one of the first rookie sensations I ever knew. David Clyde came first, followed by Mark Fidrych and then Bob Horner. And then came Go Joe Charboneau.

The stories about him were repeated so often that I had them memorized. Got stabbed by a crazed fan with a pen knife. Performed his own dental work. Fixed his broken nose with a pair of pliers.

A lot of the stories revolved around beer, as good stories often do.

Charboneau could drink beer through a straw from his nose.

And the one that stuck with me the most: he could open beer bottles with his eye socket.

I couldn't drink beer in 1980, but damn that sounded impressive.

It must have sounded impressive to Donruss, too.

Because the next year, it issued its first baseball card product. For its card of rookie sensation Joe Charboneau, it asked Joe to pose in Comiskey Park in Chicago with a bat on his shoulder.

And then in a bit of genius, it made sure that the scoreboard made the shot.

The scoreboard with the following message:

This Bud's for you, too.

But I'm not going to open it with my eye socket.

Douglas said…
I think the four players mentioned in this blog belong to two separate groups. Clyde and Horner (who had a very good career on mostly bad teams) were first draft pick impact players. Clyde never came close to fullfilling his promise.

Charboneau and Fydrich are examples of "surprise" one season wonders. Players that came out of the blue and far exceeded expectations and got incredible buzz. After that season; nothing. Maybe they had deals with the devil.
April 30, 2013 at 9:13 AM

Anonymous said…
LOL that's awesome! I never knew that. Gettin' into baseball later, I've always heard about this song about Joe Charboneau, but I've never found a copy of it. Couldn't even find it on Youtube. Dying to hear it.
April 30, 2013 at 10:32 AM

Nick said…
I've had this card for years and never noticed the beer ad in the background. Quite the hidden gem.

Commishbob said…
The Go Joe Charboneau is available online. Go to this webpage. It's an archived radio program from a Cleveland radio station. You'll find a playlist and click on any of the 'pop-up' links way over on the right. When the player appears move the slider to the 1:40:00 mark and it'll be the next song the DJ plays.

Fuji said…
I've gotta add Charboneau to my sports card bust wantlist. This guy is definitely a name that takes me back to my cardboard collecting roots.
May 1, 2013 at 11:19 PM