July 05, 2011
Exactly one year ago today, I began a series on the best card backs in collecting history.

I told you that the series would be a nice little summer diversion. It might even last into autumn, but then we'd move on to more serious card matters.

As usual, I was wrong. A countdown of the top 50 card backs is actually a fairly large undertaking, and like almost all of my "bright" ideas, the execution takes much, much, MUCH longer than anticipated.

So we're now midway through 2011 and I'm just now ready to tell you what the No. 1 card back is. I'm sure the anticipation was at fever pitch maybe nine months ago. But now, you couldn't care less (or COULD care less, depending on your grammatical viewpoint). You're barely paying attention.

But I'm pressing on, because that's what I do best. 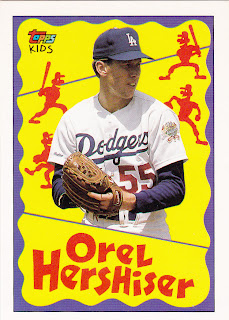 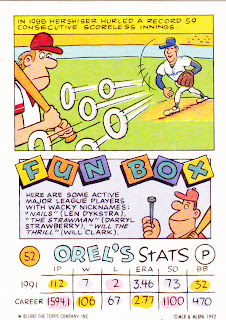 He did it again! He guessed it! Oh, how does he do stuff like this? It's amazing. I guess that's why he's the Cardboard Junkie!

Yes, what a wonderful card back! 1992 Topps Kids is a delightful little scamp of a set. The simplistic, cartoon drawings on the back speak to an innocent time when baseball went hand-in-hand with child-eyed wonderment. Look at the marvelously intriguing comic ...

I hope nobody threw their computer in the trash in disgust.

No, the #1 card back is something probably a lot of people saw coming, given how much I've gushed about the set before. 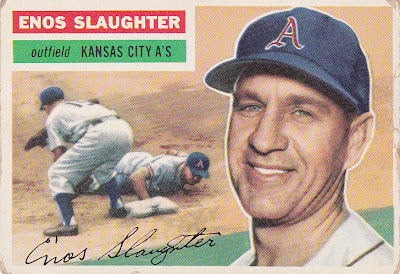 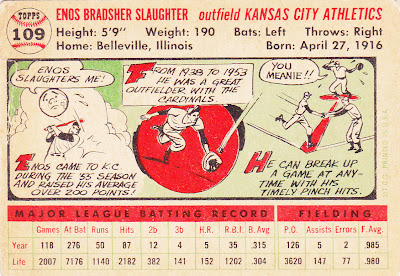 The 1956 Topps set is one of my all-time favorite sets. In fact, if I had to rank them, it would be No. 2 behind the 1975 Topps set, and '75 is really only there because it's the first set I ever bought and collected, and I have a fierce allegiance for colorful sets.

But the 1956 Topps card back is my absolute favorite card back, and it has everything to do with the cartoon.

I can sense the "Full Career Stats" people getting bitter beer face over this announcement. In fact, my top three card backs -- '56 Topps, '91 Stadium Club and '89 Upper Deck -- did not feature full career statistics.

But these sets are given leeway because they're "outside the box" type card backs. Sure, if you have a simplistic, run-of-the-mill card back, then you better damn well give the collector full career stats.

But '56 Topps gave the collector so much more. 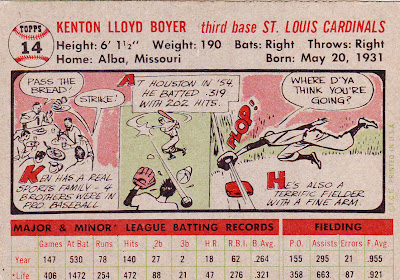 It gave collectors a story in cartoon form. It was a three-panel comic strip on cardboard. And Topps was so proud of the artwork that it made sure the cartoon took up two-thirds of the card back. 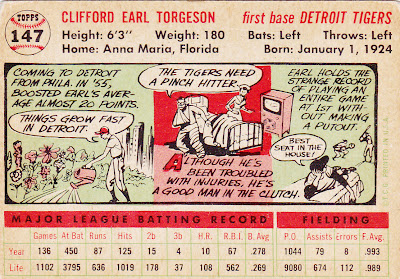 The cartoons are the most creative that I have seen on baseball cards. How many times can you illustrate that a player is good in the clutch? Well, you find out with the '56 cartoons. They display that concept in myriad ways. While other sets might show a mean-looking batter with a large bat, '56 Topps goes the extra distance by showing a hospital-bound player (with glasses) alarming the nurse by leaving because the Tigers need his services. The cartoonist even drew the TV that the player would have been watching when he decided that the Tigers needed him. 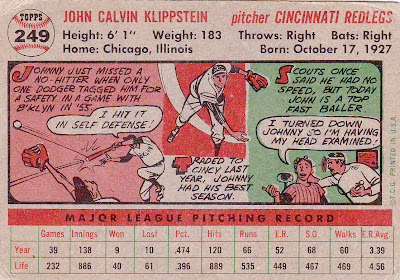 Here's another one. The cartoonist invents a situation in which the scout was so upset about his misjudgment of talent (if there really was one -- anybody ever hear of Johnny Klippstein?) that he went to a doctor. It's amusing. It paints a picture. It's awesome. 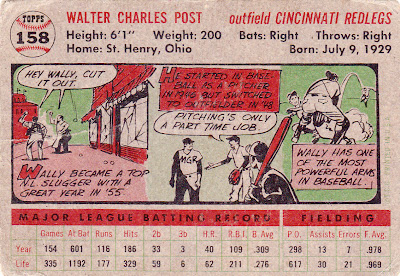 Another one. How many times have you seen a cartoon illustrate that a player is a great slugger by showing a baseball sail over the fence? Dozens. If the cartoonist is slightly creative, he may even show 4 balls sail over the fence at the same time.

But how many times do you see a cartoonist illustrate a player's slugging ability by showing angry shop-owners shaking their fists at the stadium in front of their stores' broken windows?

Only one set can do that, AND give you two other cartoons on the same card! 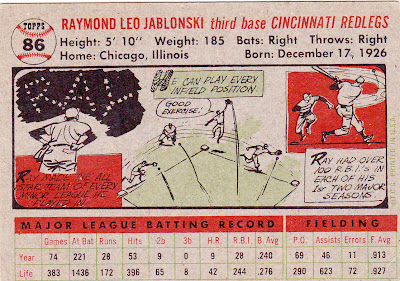 As a young teenager when I acquired these cards from a co-worker of my father, the cartoons captured my vibrant imagination. I wanted to see my name in lights, and wondered what it would be like to be able to field every position. 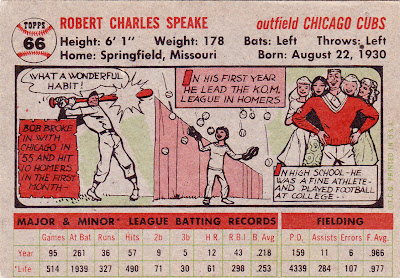 And, for some inexplicable reason, I really wanted to be Robert Charles Speake. 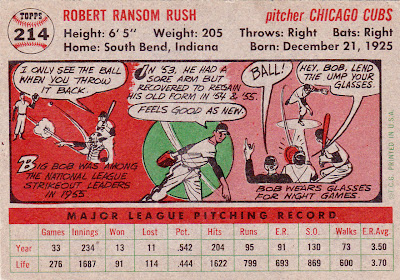 After '56, Topps never placed as great an emphasis on the cartoon as it did this year. The cartoon was squeezed in favor of full stats in 1957. It maintained a regular role through the '60s and '70s, but by the '80s it hardly appeared at all.

To me, the cartoon enhances the entire card back experience. Put a cartoon together with stats and bio information and you've got the perfect card back.

But I'm willing to bet that collectors found out even more about a player from the '56 card backs than from other sets. The cartoons sucked you in, and you couldn't help but know something about the player reading them. They are the most fascinating card backs that were ever done.

I have no idea who the cartoonist was for these sets, but he really kicked ass with this performance.

There will never be another '56 Topps.

Got to go with Rip Repulski. 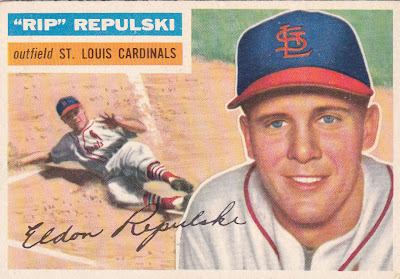 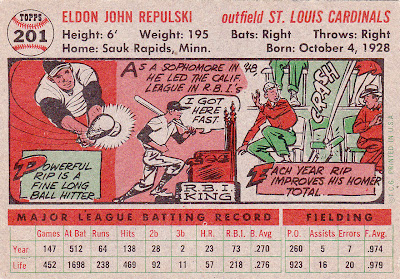 So, there you are -- the best 50 card backs ever. I will create a link on the sidebar for the card back countdown.

I don't care if you agree with the choices. But I hope you enjoyed.

shoeboxlegends said…
Great series of posts, thanks for taking that on. I enjoyed reading every single one of them.
July 5, 2011 at 9:25 AM

John Bateman said…
Topps Kids WTF - You had me going -great set up/fake out - I was believing it until I continued to Read further down.

I was dissapointed with Stadium Club though - At the time the backs were kind of innovative and I loved the rookie cards on back. But I think the problem was back in 1991 we were in the junk wax era but we did not really know it at that time. Thus it was great seeing rookie cards on the back but now who cares about seeing a 1987 rookie card. 1991 Stadium Club backs work for a few superstars (Mattingly, Boggs) and the few players in the set with rookie cards from the 1970s
July 5, 2011 at 9:32 AM

Anonymous said…
Great series - it was the first thing that grabbed me when I found this blog. I like the choice of '56, but could almost buy the Topps Kids set for exactly the same reasons.

Captain Canuck said…
Okay, so now I need you to take these 50 card sets, and re-rank them according to card FRONTS. Then take an average of the two scores to come up with the greatest card set of all time according to Night Owl.
July 5, 2011 at 11:27 AM

Anonymous said…
Awesome. Well done, sir. I'm not gonna lie and say I saw right through the Topps Kids joke, but I'm sure glad it did turn out to be a joke. I expect more from you...