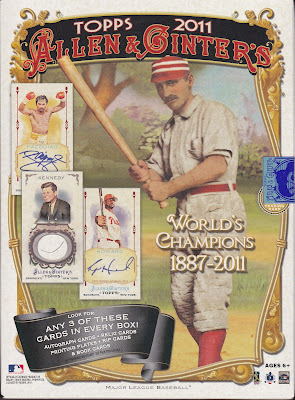 My box of Allen & Ginter arrived today. I totally missed it. Because I'm an idiot.

I happened to notice that several bloggers had received their boxes of Allen & Ginter in the last day or so. You had to look real close, but I figured it out. I assumed that meant that I would get mine soon, too, since I ordered it from a well-established, reliable supplier, who has done me well throughout the whole Gint-a-Cuffs era.

But when the mail came and went this afternoon, I got a little panicky. I decided to send a pleasant email to Atlanta Sports Cards, mildly inquiring as to when my package might arrive.

A responding email followed quickly. In it, they said that the box had been shipped and they added the UPS tracking number. When I clicked on the number, the drop-off information was documented. It said: "Delivered on Thursday, 1:40 p.m. Left at porch."

I immediately stood up (oblique strain and all), walked to the porch, and there was the package. It had sat there for a whole two hours.

So, essentially what the return email was saying to me was, "look on the porch, dumb-ass."

But I have my box of Allen & Ginter, and that's all that matters. All I've opened from it so far is one pack. And the N43 card.

For the first time, I didn't get a cabinet card. I got an N43. I'm taking that as a sign that I'm going to win this whole Gint-a-Cuffs thing in historic fashion.

Here is the N43 wrapper: 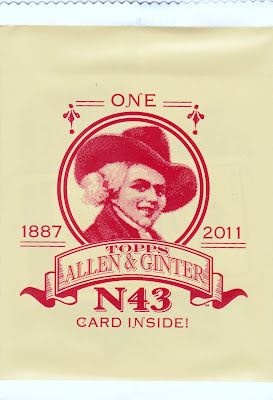 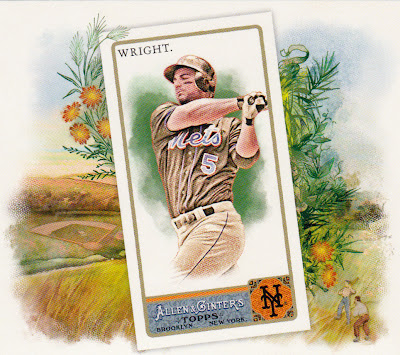 David Wright. But of course! My Mets mojo has been in full force the last couple of months.

There are no Dodgers N43 cards this year, so I can't say I'm disappointed in Wright.  Here's the back, so you can see who's on the checklist this year: 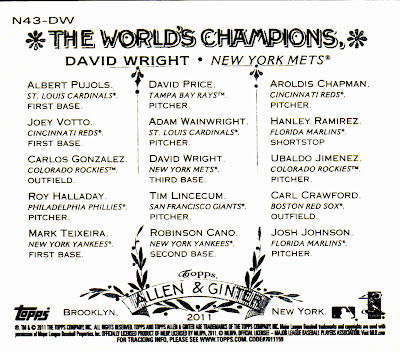 As you can see, I could've picked much worse. Pulling a Teixeira N43 card would have been horrible. I'd have to ship the whole box back to ASC with a note that said, "why do you hate me?"

All right, you want to see the first pack, don't you? Only 17 bloggers have shown any A&G so far, and I can tell that's not enough for you.

So, here is Pack #1. The Gint-a-Cuffs rules aren't out yet, so I'll go back and score this pack when they are. In other words, I will retro-score a retro-set. Heh. 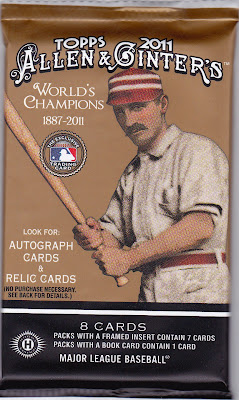 That's the wrapper all the hobby box purchasers are seeing. The wrappers look the same as the retail packs, except that it says there are 8 cards in a pack instead of 6, and it features the official "H" for "hobby pack." 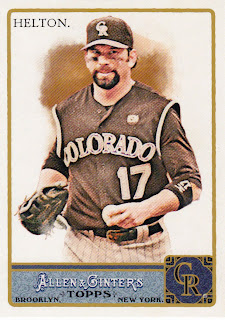 Of course, it had to be him or Carlos Lee. 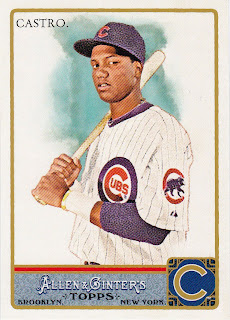 A comment on the design. I've decided I was too rough on this design initially. I'm still not crazy about it, but it's definitely better than last year's design. When I look at the 2010 set now, I can't help but shake my head. It wasn't good. I don't even know why I collected it.

The 2011 design kind of reminds me of 2001 Fleer Greats of the Game, the autograph set. And I really need to get off my butt and get this card. 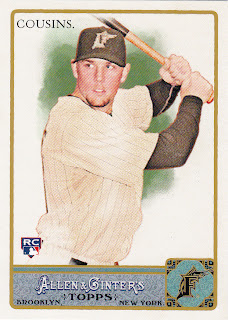 The most evil man in America. He made Buster Posey fans cry. The horror. I, however, have no problem with him. 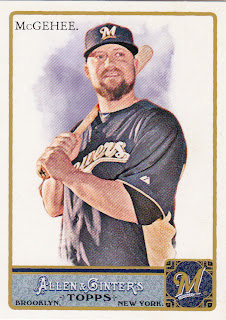 This is an excellent time to look at the back and tell you something about McGehee, because I know very little about him. Unfortunately, A&G backs look the same every year and they are most unhelpful. 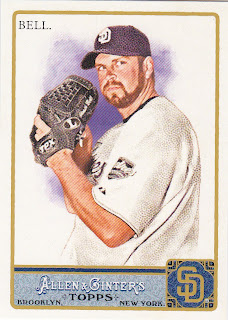 I understand that sports television networks have renamed the date of the All-Star Game as "The Day We Found Our New TV Darling in Heath Bell." Half of the broadcasters on ESPN and Fox acted like they wanted to have his child. 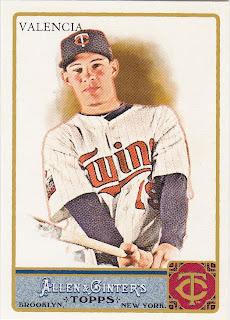 He is a short-print. I have just scored some sort of points in Gint-a-Cuffs. That is all you need to know. 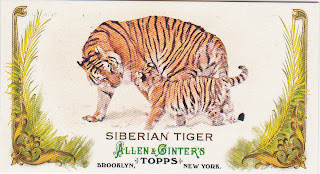 I guess the animal minis were so popular last year that Topps decided to do it again. I like last year's ones better. I liked the country flags. 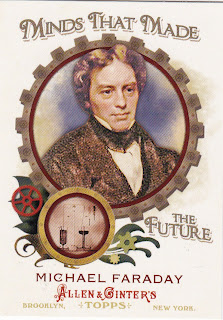 Faraday is one of the fathers of electromagnetism. I began looking up Faraday's contributions, but started to see "ohm" and "amp" and suddenly I was in 12th grade physics class. I wouldn't wish that on anyone.

So, if you've been counting along, that's eight cards.

Kind of nice going through that unencumbered by a Gint-a-Cuffs grading system. But nobody said collecting cards was easy or fun, right?

I plan to open the rest of the packs in the box tonight.

But I will not show them until Gint-a-Cuffs begins.

Not even if it's a framed printing plate of a DNA relic and signed by a Topps employee in red ink.

Nachos Grande said…
Good luck! I'm sad to report my case did not produce an auto of Mr. Kershaw. Luckily for you, I don't think it's a sign of me losing my Dodgers pulling mojo but rather a by product of Kershaw not signing cards for Ginter this year.
July 14, 2011 at 8:02 PM

And yes, neither Kemp nor Kershaw have Ginter Autos or Relics, unless I was blind when looking through the hits checklist.

Play at the Plate said…
So let's see if I understand this...the N43 checklist has two Cardinals (one of whom has missed all season), two Rockies (one of whom is having a terrible season) and two Marlins (of which there is no proof of them even having a season because no one goes to Marlins games) and there are zero Rangers.