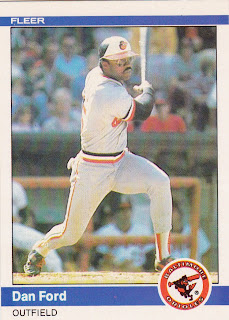 Fleer's products have produced the most illustrative names so far in the Define the Design segment. The '87 set is the Blue Freeze Pop set. Wonderful. The '88 set is the Barber Shop Pole set. Perfect. The '89 set is the Pinstriped Gangster Suit set. Awesome.

I'm in the mood for something clever and interesting today. But I don't have a lot of time to write. So let's try to name some other Fleer sets from not so long ago.

How about the 1984 Fleer set? It's one of my favorites. It's rather simple, which may make naming it a little difficult. But I know I've seen that "blue bar on top and bottom" somewhere before. I'll have to think about this one. 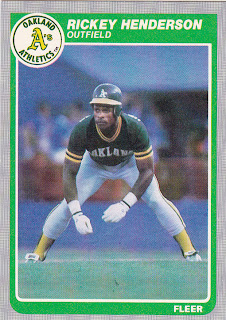 You have to like the colored frame on 1985 Fleer. The company did a good job of matching its design with each respective team early in its history -- specifically 1982 and 1985 Fleer. Other than that, it kind of has a geometric design reminiscent of today's Bowman. Bowman will probably steal the design for 2012, change the colors to black and red and lure in a whole bunch of gullible collectors! 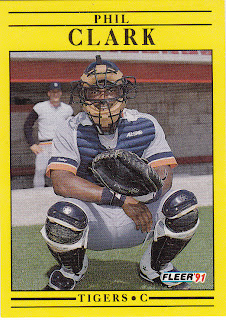 Yes, let's finally name 1991 Fleer and get it over and done. Shouldn't be too difficult. The Burn Your Retinas set? The Living on the Sun set? The Radioactive Set? I kind of like the last one. 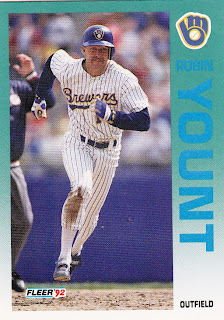 Fleer bounced back a little bit in 1992, although I wasn't much of a fan of this set either. It does put me in the mind of mint ice cream, which I think would work pretty good in the Define the Design name. The Wintergreen Set? It's a thought.

If you have any ideas -- and you've come up a few great ones -- please comment. I'll announce the results at some point in the future.

Oh, and by the way, there was a no-hitter today, and I was working. So that streak is out the window.

Ryan G said…
1984 has such a plain design. It reminds me of maybe a transit logo. But that wouldn't make sense in a name.

1985 could be called the Tupperware Cup Set. Gotta love those primary colors that make it look like a plastic cup.

1991: That's School Bus Yellow! So you could call it the School Bus set.

1992: Wintergreen sounds good. So does The Frozen Tundra. I guess.

I dunno, my ideas are kind of lame, I think. But I'm an American and I have a right to my ideas! *waves flag around* DEY TUUK ARR JOWBZ

Anthony Hughes said…
I would think the '92 Fleer should be Spearmint. At least with gum, usually the Spearmint packs are green, the Wintergreen are usually blue. There is actually a blue version of the '92 Fleer, released by Citgo, same design except blue. Different pictures too. Looks better in my opinion.
July 27, 2011 at 9:56 PM

dayf said…
1984 Fleer: The Stationary Set
(think of an extreme close up of lined notebook paper, or that old school computer paper with the blue bars on it)

1985 Fleer: The Man in the Gray Flannel Suit Set

1991 Fleer: The MY EYES! THE GOGGLES DO NOTHING! Set http://www.youtube.com/watch?v=juFZh92MUOY

91- crime scene warning tape set...WARNING do not cross this tape, do not buy boxes and boxes of the set!