The exception to the horizontal rule 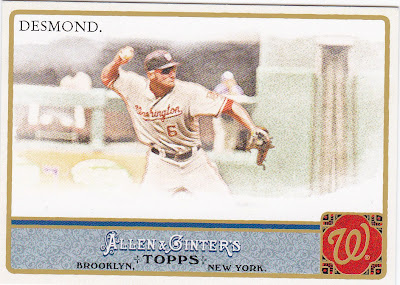 That Mark A. is a clever fellow isn't he?

I go and squawk about waiting on the Gint-a-Cuffs III rules, so he releases them a few hours later, knowing full well that I'm at work, dealing with a mammoth overhaul of our business's computer system, which is scrambling everyone's freaking MINDS, and won't be in any kind of shape to unveil the first Gint-a-Cuffs III-scored pack when I get home, so I'll go to sleep, and while I lie in a stupor subconsciously preparing for whatever work horrors appear the next day, 48 different bloggers will put up Gint-a-Cuffs posts, so by the time I get around to mine (I usually wake up around noon, thank you very much), I'll be the 49th person to comment on how boring the Hometown Heroes insert set is.

So, all I can do now is address yet another A&G related phenomenon. It's one that irks me a bit.

It's the horizontal A&G card.

Normally, I love horizontal cards. I've mentioned that once or twice.

But not on A&G. I do not like their horizontal base cards. I haven't for years.

They don't fit with the A&G look. They're usually action cards. A&G is a portrait set. Action cards look awkward in A&G. Especially if the action is at a distance.

The other reason I don't like them is often the images are too small, especially when compared with the vertical cards in the set. A&G seems to have worked on this for this year's set -- the horizontal images are a little larger.

But the images still seem murky and don't seem to match the quality of the other cards. The Ian Desmond card illustrates the problem well. It's too small, it's unclear, it doesn't look like it fits with the rest of the set. The Sin-Shoo Choo card in this set makes Choo look like he's hitting out of a hole that comes up to his waist.

I don't know what other collectors think about the horizontal base cards in A&G, but I wish Topps would get rid of them. Or find a better way to display them.

Anyway, you can expect my first Gint-a-Cuffs III post sometime in the evening hours of July 21. You know, after you've already seen your 34th Dirk Hayhurst card (he's the one wearing Bullwinkle Moose ears).

hiflew said…
I wish they would do away with them. But I also wish they would do away with them in the flagship set. I do not dislike horizontal cards, quite the contrary. What I want is for my cards to look good in a binder page. and 75% vertical and 25% horizontal isn't good looking. If they want to make an entire landscape set (Stadium Club perhaps) I am all for it. But let's get some conformity back to the other sets.
July 21, 2011 at 7:56 AM