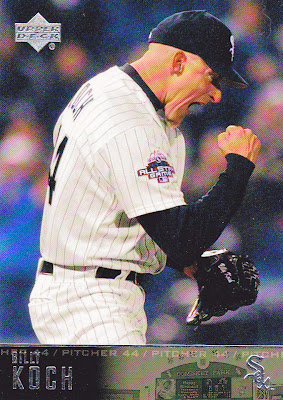 Me and my projects.

Billy Koch is celebrating here because I have finally figured out a way to collect awesome night cards that will actually make me excited about my binder of night cards instead of saying, "eh, here's my binder of favorite night cards. There's no real reason for why these particular cards are here in this order."

Yes, I know we had an Awesome Night Card tournament, and I put the cards that were voted the best in the front of the binder.

But I need a reason for the positioning of all the cards in the binder. Because I'm fickle and impatient and scatter-brained and we've gotta do somethin' different.

So I'm doing this:

I'm sure everyone has heard of the Frankenset before. I'm not going to explain it because I tried to do so and confused myself and had to erase it from the post. If you want an explanation go to The Cardboard Junkie, and he'll mention the Frankenset every once in awhile because it's Allen & Ginter season, and I'm assuming he invented the whole Frankenset thing anyway.

He has a Frankenset going with A&G minis, and somewhere out of the blue last week, I thought, why don't I do a Frankenset with night cards?! Now, it's not really a Frankenset because I'm not sticking to one particular card line, like Heritage or A&G. Instead, I'm just making sure I have one night card in the binder for every card number from 1-792.

I expect to complete this mission some time in the distant future, say when mothers are bearing children without arms or legs because limbs aren't needed anymore.

But don't try to get me down because right now I'm very excited about this.

So far, I've gone through all of the night cards on the blog and have written down the card numbers for them. They get the first shot at the binder. Then, I'll go through my other night cards and fill some other gaps. The fun will begin when two cards share the same number and I have to decide which one makes the binder.

Right now I know I'll be doing that with numbers 104, 119, 279 and 639 because there have been two Awesome Night Cards with those numbers.

As of now, here are the numbers that I know I have night cards for:

That's not all of the Awesome Night Cards. I still have to double check the numbers on some of them. And there are a few that have been featured that I can't put in the binder because I either don't have them anymore (yes, I traded a couple), or they had no number, or they don't fit in your average pages (think Topps Big).

I'm very pleased that I already know the first three cards in the binder. Presenting: 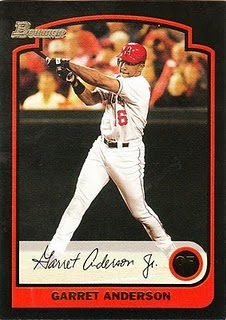 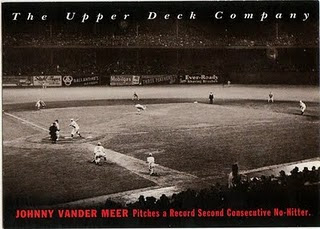 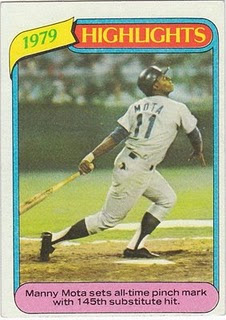 Those are the first three right now. I have a feeling it won't take much to knock Garret Anderson out of the No. 1 spot.

So that's my latest card excitement. I'll see how excited I remain 10 years from now when I'm still looking for 40 blasted night cards for the 700 numbers.

By the way, that thing about me not having any OCD-like tendencies? Never mind.

Brian said…
How about a page constructed as a nine man roster of night cards?
You could actually have an AL & NL roster page because of the DH. Pick a stadium night card for each team to call home.
Then you could imagineer a game between them to project which would win the World Series of Night Games! I'll leave it up to you in which stadium they would play.
It would be the Night Owls vs. the Night Sweats!
July 17, 2011 at 9:03 AM