I wrote a post about it, as I normally do. Some people may wonder why I do that. Well, it's my blog and I tend to touch on items that pertain to me on my blog, and my birthday definitely pertains to me. So that's why I write about it.

But just so it doesn't get too egotistical, I try to tie it in with cards.

This time, I wrote about the former Dodgers who share my birthday. There are three of them who spent any appreciable time with the Dodgers. I lamented that I didn't have a card of one of them, Norm Sherry. I mentioned that I did have a card (actually I have four) of another one, John Purdin.

And I mentioned another player, Tommy Tatum. I brushed off ever getting a card of him. He played during the 1940s and in only 69 total major league games. I was pretty sure there wasn't a card of him.

So, a few people read the post, the kinder ones wished me a happy birthday, and everyone moved on with their non-birthday lives.

But one person did something more. And if you have some sort of issue with announcing your birthday on your blog, you might want to reconsider.

Commish Bob of the 1959 Topps blog read the post and then sent me a package. He said it was a belated birthday gift. Here is a card he sent: 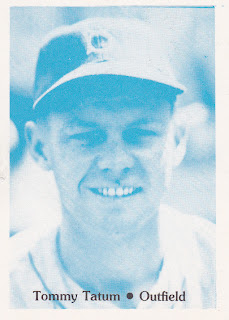 That, my friends, is a Tommy Tatum card.

I forgot about TCMA. They issued about four quazillion sets in the 1970s, recognizing every notable baseball team in history. The Tatum card comes from the '78 set honoring the 1941 Brooklyn Dodgers. Tatum was a '41 Dodger for all of eight games. He served in World War II after that, then returned to the Dodgers for the 1947 season. Oh, and he was born on the same day as me!

It is totally cool that someone found this card and sent it to me.

But the Commish wasn't done. He also threw in this card: 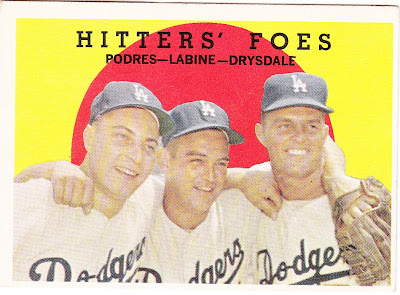 To me, this is one of the greatest cards in the 1959 set. I can think of only the Campy Courage card, and maybe a couple of others that can top this.

I thought it would take me quite awhile to track down this card, but I can cross something else off the list. Fantastic!

You might remember that Topps Heritage paid tribute to this card in the 2008 Heritage set. 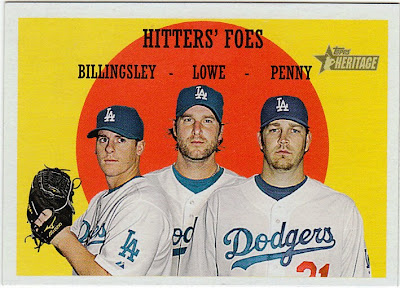 Yeesh. It comes up a little short, doesn't it?

Thanks, Commish Bob, for making my birthday last a little longer with one great gift.

And that's why I'm not afraid to say it's my birthday.

By the way, I have another birthday gift to show. I probably won't get around to it for another week or so. But it's a great one. It involves another Dodger who was around in '59.