Maybe I need only one Giants fan in my life 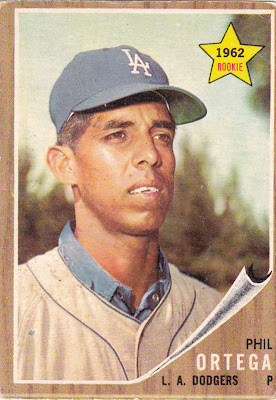 A couple of months ago, I wrote about the fortunate circumstances that arise when Dodgers and Giants collectors trade. Each trader ends up with exactly what they want. I receive my precious Dodgers and the Giants fan ends up with, well, Halloween-colored refuse.

This kind of exchange works so well that I should be seeking out other Giants card collectors. If I tried really hard, I might be able to completely rid myself of every Giants card in my collection. Now that's a goal worth setting!

Unfortunately, it's well-established that Giants collectors are practically extinct, if they existed at all. I don't understand it. They apparently won something big last year. That should produce some collectors, right? And everyone always gushes about the "electric atmosphere" at "the beautiful park" (I won't mention its name because I still have no idea what it is). But yet no one who goes to the games collects cards of the team. I just don't get it.

Anyway, it doesn't matter, because apparently all I need is just the one Giants fan. I struck another deal with Adam not long ago, shipped another box of unholy cardboard his way and ended up with beautiful blue Dodgers in exchange.

As usual, I can't show them all, but I can show the best. So, let's see the best: 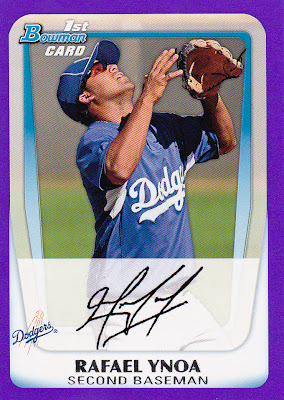 It's taken Rafael Ynoa six years to get to High A Rancho Cucamonga, which is where he's playing this year. But I've got 3 or 4 parallels of this card already, so he needs to ACCELERATE already. I've got a kid who is going to college some day. 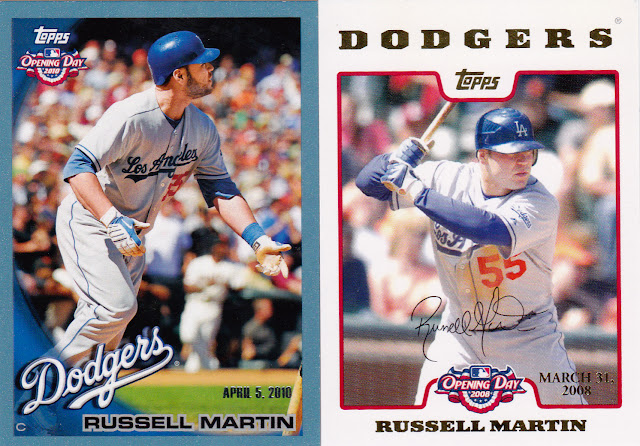 Here are two Opening Day parallels of the .220-hitting All-Star catcher for the Yankees. Yeah, yeah, I know all about his WAR when compared to other A.L. catchers. I still think he's an All-Star because he's a Yankee, and that he won't be playing major league baseball in two years. 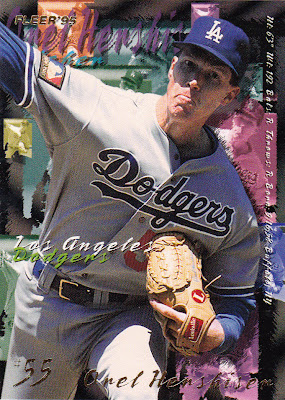 I had the following exchange with my wife about Orel Hershiser the other day: 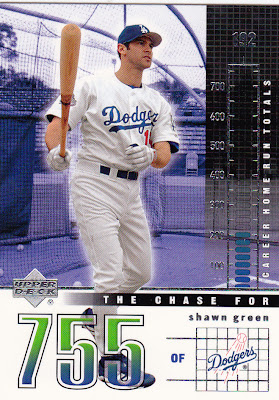 You can argue all you want, but you can't convince me that this wasn't a reason that contributed to why Upper Deck doesn't have an MLB license anymore. The Chase for 755? For Shawn Green? At the point of this card, Green had 192 career home runs and was 30 years old. If he played to age 45, he would've had to hit more than 37 home runs every year to reach 755. Nice try, UD. 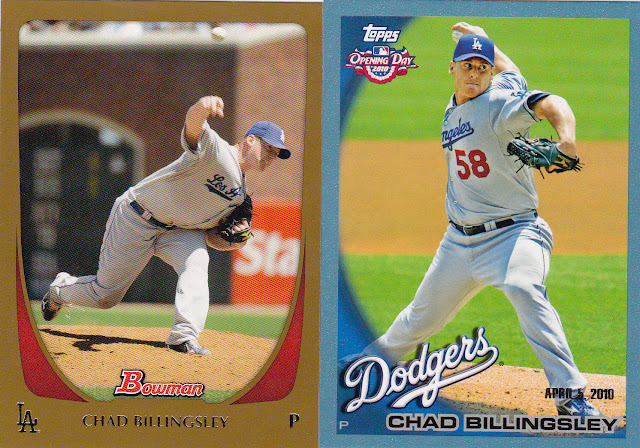 Sometimes I think Chad Billingsley has contracted an inferiority complex pitching behind Clayton Kershaw. He just doesn't handle adversity as well. And neither do I. I find myself repeating "he's only 26" over and over. 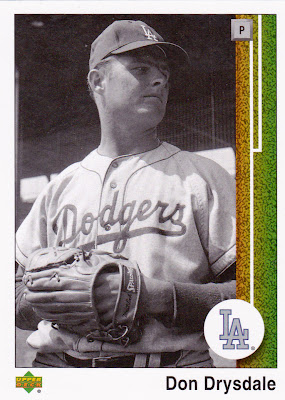 Big D on an '89 Upper Deck design from 2007. No idea what this is. My modern baseball card awakening came in the latter half of 2008. Cards like this still confuse me. 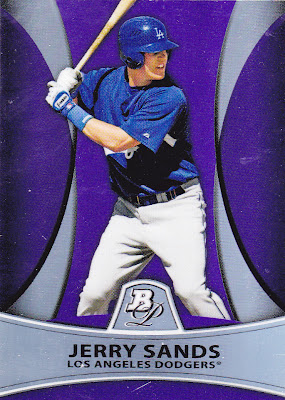 At a certain point, the Dodgers are going to have to admit that there is no pennant race and that Eugenio Velez/Tony Gwynn Jr./Trent Oeltjen is pointless in left field. Put purple parallel Jerry Sands out there and let him hit .225 and wow some people with a few bombs over the left field fence. What's the harm? 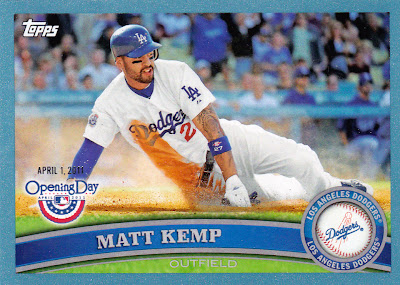 Topps came up with an appropriate Kemp photo for 2011. The man is ballistic on the bases. 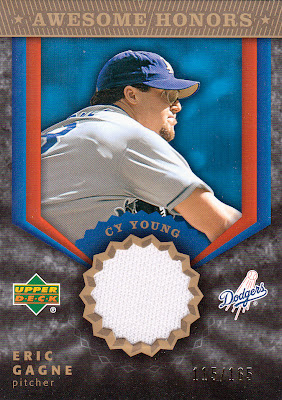 Wooo! More Gagne jersey greatness. I'm pretty sure I have more Gagne relics than any other Dodger. It doesn't mean as much as it did in 2005. But that's OK. Me and Gagne have an understanding. He holds a record that may never be matched. That's good enough for me. 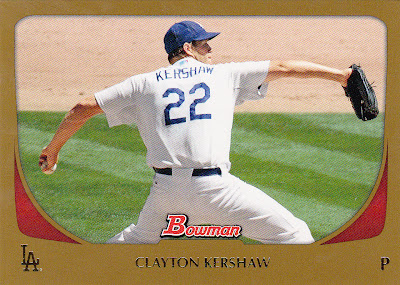 Kershaw was pretty stunning tonight. People forget he's only 23 years old, which is why I have no problem comparing him to Sandy Koufax. What was Koufax doing at age 23? OK, so it's lot to put on a guy. But meanwhile, Kershaw is striking out batters at a rate of more than one an inning. Only two other Dodgers have done that in their careers. One is Gagne. The other is Koufax. 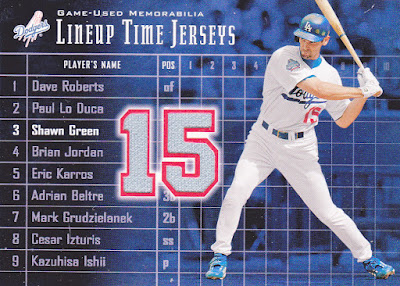 Upper Deck did better with this concept. Was there really a relic card for every player in the lineup? I tend to doubt it (I don't see a lot of Mark Grudzielanek relic cards). But a great-looking card. 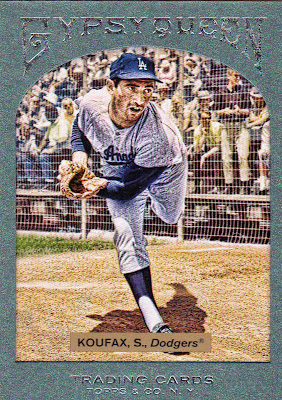 Hey! There's Sandy now! Koufax is appearing at an alarming rate on Topps cards this year. I'm starting to worry that Topps will beat the Koufax legacy into submission. Wait, what am I talking about? Of course, they will!

I guess I better enjoy the Koufax cards before everyone but me gets sick of them.

I'll stop there even though there are plenty of other key cards from Adam.

I'm sure I still have a few more Giants to kick out of the house. But first some people have to admit that they collect Giants cards.

I live in SF, and I consider myself a Giants fan, but I don't do the team collection thing, so I can't be of help there. But if you have any random oddballs I need, I have plenty of Dodgers to get rid of. They have been picked through a bit by Greg, but there's gotta be something you'd like...

I can offer some insight into the SF baseball crowd. Most of the true, old-school collectors around here don't seem to be into the new stuff. The best show here really has only one dealer with busted new product. Most of the other tables are full of vintage cards and souvenirs. The Giants fans who go to the park aren't the collecting type. They follow the team through the news, most of the time, and view the ballpark as a great place to socialize. The people who collect Giants cards tend to be more interested in having one or two showcase pieces (like Triple Threads or Tribute cards) for a few select players than anything we consider a collection. Remember, this area is full of people who spend their free time sipping wine, eating gourmet food, and saving old buildings. Not that there's anything wrong with that. It's just a different type of fan. Head across the bay to see an A's game and you'll see some fans more in tune with what we think of.
July 8, 2011 at 2:57 AM

Play at the Plate said…
I think it's weird that I know two Rockies collectors and no Giant's collectors. Even my best Navy bud who lives in the Bay Area and is a die-hard Giants fan doesn't collect their stuff.

Spiegel83 said…
Congrats on finding a Giants collector to dump some cards on. Please send him my info. My cat is getting tired of chewing up so much Giants cardboard.
July 8, 2011 at 6:51 PM

Ryan G said…
I feel sorry for this poor guy having so much stuff being dumped on him. Spiegel, you better be careful - I hear orange ink is toxic. Look what it did to Lincecum and Wilson, after all.
July 8, 2011 at 7:25 PM

arpsmith said…
Glad you enjoyed the cards, I really appreciated what you sent me as well. I probably have enough good Dodgers left for one final trade if you are interested, drop me a note.
July 14, 2011 at 3:43 PM