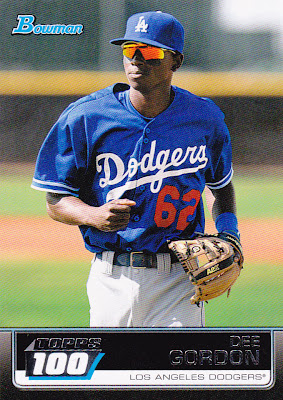 Unless Ned does something Ned-like, the deal between the Cardinals and Dodgers is virtually done and Rafael Furcal will be hauling his 476-year-old body to St. Louis.

Raffy spent six seasons with L.A., which translates into roughly 1.45 years when you measure it in Furcal's time present on the field. A friendly warning, St. Louis fans: when Furcal is playing, you will be convinced that he is the most amazing player in all of baseball and puzzled why he is not getting his due. But when he's not playing -- and, damn, an entire country could go into and out of and back into a recession in the time he spends on the DL -- he is a frustrating, infuriating, old, old, old man, made out of glass and put together with model airplane glue.

But Raffy was destined to be gone by the offseason at the latest, so I just hope we can get someone out of this deal who can turn into a starting catcher, or third baseman, or second baseman, or first baseman.

I think we're going to be OK at shortstop. Dee Gordon was on a flight tonight to Los Angeles to rejoin the team. I really, really like Dee Gordon.

Gordon is an exciting player. I am obsessed with exciting players -- who isn't? -- and Gordon might be the fastest player I've seen in a long time. He can field, too. Now, all they have to do is get him equipment that fits. 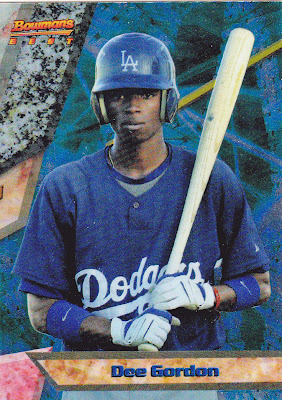 Every time I see him, it looks like someone needs to pull him aside and say, "Son, you need to eat at least 10 times a day."

Anyway, I've been trying to grab whatever Gordon cards I can find this year, seeing as he's the Dodgers' top prospect and has finally hit the major league level.

Little did I know that I already had some of his cards -- three years ago. 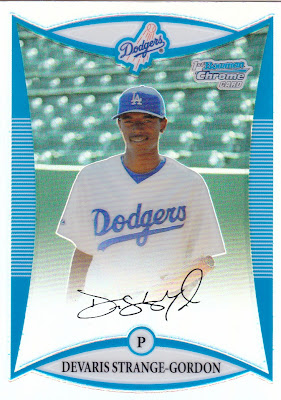 Dee Gordon was known as Devaris Strange-Gordon back in 2008. It occurred to me that Strange-Gordon and Gordon were one and the same only after I read a blog post a day or two ago. I wish I could remember which blog it was to give it credit, but it's left my head.

That post prompted me to look up Strange-Gordon's cards and compare them to Gordon's cards. Sure enough, each said:

But then I read something that made me think that they weren't the same person. The back of the Bowman Strange-Gordon card says:

"NEPHEW of Phillies reliever ... Tom Gordon." Well, then, I thought, they're not the same person. Everyone knows that Dee Gordon is the SON of Tom Gordon.

So I assumed Devaris Strange-Gordon and Dee Gordon were cousins. Of course, this assumption was despite the fact that both cards listed each person as having the same birthdate. And, if I read the write-up again, I'd probably realize that "nephew" was written by mistake, especially after the write-up immediately goes on to talk about "dad." ... Yeah, I get to the point eventually. Sometimes it takes me awhile.

But this bit of confusion helped me get to the bottom of the story by doing a little more research.

It turns out that Dee Gordon, formerly known as Devaris Strange-Gordon, is not former MLB reliever Tom Gordon's blood son. In some horrible news that I never knew, Gordon's mother, Devona Strange, who was Tom Gordon's high school sweetheart, was murdered by an ex-boyfriend. Tom Gordon eventually gained custody of Dee Gordon and helped raise him.

I don't know why Dee Gordon dropped "Strange" from his name, but maybe it's because he's very comfortable calling Tom Gordon "dad."

All of this makes me root for Dee Gordon even more and happy that I was collecting his cards basically before I even knew who he was.

Now, all the prospectors and Dodger fans in California who can get Dodger news every single second of the day can have a good laugh about my discovery. I'm sure you all knew about this five years ago. Hell, probably Phillies fans who rooted for Tom Gordon knew.

But as a guy 2,500 miles away with no major league team nearby who really only focuses on major leaguers, I don't think it matters, as a fan, when you know the information, unless you're a fantasy nut. The competition is on the field, not in the stands.

And I like the Dodgers' ability to eventually compete with Gordon in there at short.

Spiegel83 said…
So long,Raffy. I am super excited for the Dee Gordon era. We only got a glimpse of him earlier this year and he was a joy to watch. The crowd has a buzz everytime he made a great fielding play or ran the bases. Fans expect to see some flash from him everytime he steps on the field.
July 31, 2011 at 4:00 PM