'56 of the month: George Crowe 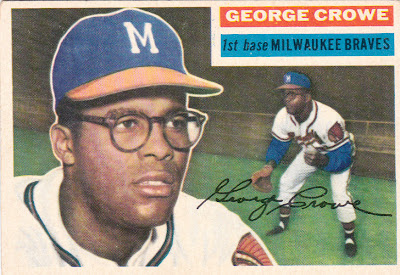 I'm a little too charged up over the All-Star Game for an in-depth post today. Yup, just like when I was a kid, I'll be full of caffeine and processed sugar and ready to soak up the stars.

I don't plan to watch the game from the start like I used to because someone somewhere came up with the awful idea of turning the pregame into a Lifetime movie, full of tears and hugging and soaring music, and oh, my, god, WHERE IS MY BASEBALL?

So I'll tune in between 30-45 minutes after the fake starting time announced in the TV schedule. If I miss the first inning, so be it. At least I'll avoid that song from "The Natural."

Of course the big news about the All-Star Game this year is the number of players who have bowed out after being selected. I don't like that. If you're injured, then fine. If you started on Sunday, then I think it should be up to the pitcher and his manager whether he plays or not. Don't make it a ridiculous blanket rule.

And, if you "just want to be ready for the second half," then, sorry, bud, I think you should never be allowed to play in another All-Star Game. You obviously don't care. Please consider a career in the NFL or NBA where their all-star games are LOL jokes.

There are plenty of other players who would love to play in an All-Star Game.

Crowe didn't get to be in the All-Star Game in 1957. I'm sure you know the story of the 1957 All-Star Game. Reds fans stuffed the ballot box that year. Seven position players from the Reds received the most votes. Reds were starters at catcher, second base, third base, shortstop, left field, center field and right field.

Only the Reds first baseman didn't get the most votes. That player was Crowe. The Cardinals' Stan Musial beat him out.

Can you imagine? You're on a team that has found a way to rig the system. You and all of your teammates are going to the All-Star Game! The Cincinnati Enquirer is printing up ballots already marked, including them in the Sunday paper, and encouraging readers to mail them in! More than half of the total votes came from Cincinnati!

But you still can't find your way to the game.

It turns out that a few other Reds didn't get to go to the game, too, as MLB conducted an investigation. An outraged commissioner, Ford Frick, removed some of the voted-in Reds from the game and during the offseason took the vote away from the fans (booooo!). 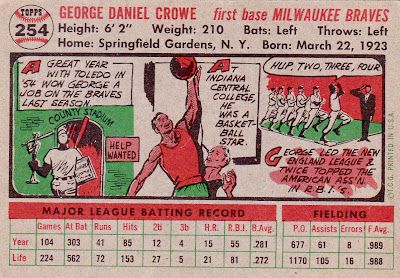 Crowe, an outstanding basketball player in school, did get voted into the All-Star Game the following year, but he didn't play in the game. (Interestingly, Crowe hit 31 home runs in 1957 and 7 in 1958).

Today, fans enjoy the right to vote, and there is a lot of agony over it ever year. But after the game starts everyone forgets all that. The game's pretty darn good every year, too, regardless of who has been voted where. And I think if the fans vote you in, then you should play, significant injury issues aside.

This voting fan will be watching again, as I have every year since Mark Fidrych started against Randy Jones in Veterans Stadium in 1976. George Foster hit a two-run home run and Dodger Steve Garvey drove in the first run with a triple in the first inning. I was hooked.

Anonymous said…
I can give AFraud and Jeets a pass, since they've been to a bunch anyway and are sooooo old. Plus less stanky Yankees. :D
July 14, 2011 at 4:21 AM