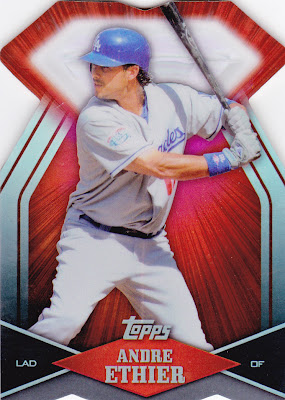 This card arrived in my mailbox on the same day that it was announced that Andre Ethier would appear on the National League All-Star roster after all.

Double happy day (make that triple happy day. It was also the last day of work before vacation)!

This is the third Topps Diamond Diecut that I've obtained and ordered through the Diamond Giveaway promotion site. Of course, all three cards have been Dodgers. I have only one more to go -- the impossible Sandy Koufax -- which begs another question:

Why are there only four Dodgers in the set, when there are like seven White Sox and Rangers and 11 Braves? Look, I know the Dodgers have their issues, but don't give me that crap that it's because "the Dodgers are down" lately. Anybody hear of Matt Kemp? I think he's a little better than Chris Sale. Yet Kemp has no Diamond Diecut card.

Of course, this is a glass-half-full-glass-half-empty scenario. The fewer of these things I have to chase, the better. And, I just know, based on the fact that Kemp and Billingsley (hell, even Broxton) wasn't included, that there is going to be some sort of Update Diamond Diecut set coming soon.

Anyway, I hadn't planned on ordering the Ethier card so soon, but the ridiculous trade offers for it were starting to elevate my stress level, and how am I going to explain that to the paramedics? I can see bombarding the guy with the Reggie Jackson Diamond Diecut (that'd be me) with a ton of offers, but Andre Ethier? Get a grip, ladies.

So, I ruined their game by ordering the card. I also ordered a couple of vintage Dodgers while I was at it. Here are the so-so results: 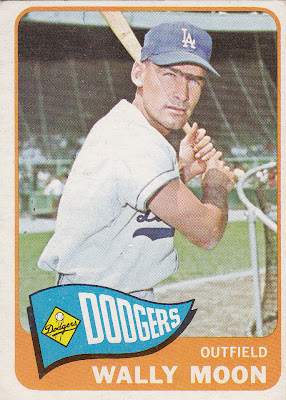 One of my favorite Dodgers of the late 50s-early 60s, Wally "Unibrow" Moon. As you can see, Moon's card has very nice corners and is in good shape except for the glaring off-center issue.

I don't mind that on a '60s card. Off-center issues are way down on the list of concerns, so I will happily enjoy this card. 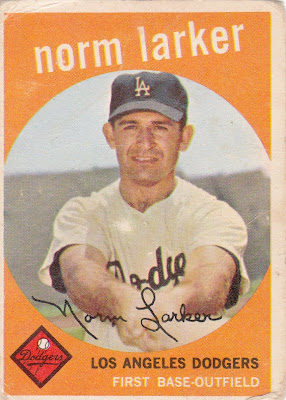 As you can see, this Larker card was flipped a few hundred times and all of the corners are basically mashed. Again, this doesn't bother me with a card of this age.

What does annoy me a little is a pretty obvious crease traveling over the right corner of the card. I don't like receiving cards with creases, even if it is free (never mind that $3.50 shipping). That's just the way I am, and I won't apologize for it. Do what you want to the corners, miscut the thing, even write on it. But prominent creases and stains just make me file the card under "upgrade." I'll even take a torn card over a majorly creased card.

Larker will go in my Dodger binder, but he's not leaving the want list. The want list still says I need a '59 Larker card.

And that presents another question.

I still have the Reggie Jackson Diamond Diecut card. I have declined literally hundreds of trade offers for it, the vast majority without even hesitating for a half a second. And that includes one 50-plus-card offer, and countless vintage.

But this offer has made me hesitate:

Click on it to make it larger if you can't see.

Ed Roebuck is one of several 1958 Dodgers that I need. He's the highest-numbered Dodger card in the set, although there aren't really any high numbers in '58 Topps.

If I were to pull the trigger on this trade, I know Topps would send me the Roebuck card. That's not a concern. My concern is condition. If I get a card with rounded corners or one that's miscut, then I'd consider it a job well-done. No worries. But if I get a Roebuck card with creases all through it, I'm not going to be happy.

I think I might've just answered my own question.

Captain Canuck said…
isn't Eithier the guy who wants to be traded to the Red Sox???

Play at the Plate said…
Somebody offered me a Jimmy Rollins die cut for a 1958 Tiger and I took it and flipped the Rollins for a Michael Young die cut. There are 8 Rangers too.
July 9, 2011 at 3:46 PM

night owl said…
I've tried the Reggie for Koufax thing on the site, and it ain't working. But that's the other reason for holding onto Reggie.
July 9, 2011 at 3:47 PM

Greg Zakwin said…
Keep the Reggie. It'll be much easier to get the '58 later on, and the Reggie could potentially be part of a deal to grab Sandy. Or something else once it's in-hand.
July 9, 2011 at 5:01 PM

Community Gum said…
You could also probably ship Reggie and sell it on ebay (going for $15-20) for enough to buy a '58 at a card show that you can see. Or if no one is biting on Koufax, try trading for the black diamond version of Ethier/Kershaw with the Reggie.
--Jon
July 9, 2011 at 7:16 PM

flywheels said…
I was surprised to see some of the Braves selected for the Diamond die-cut treatment. Chipper, McCann, Heyward I see...but Billy Wagner?

carlsonjok said…
I'd also take delivery, sell it on EBay and use the proceeds to buy the card you want at a show or shop where you can see it.