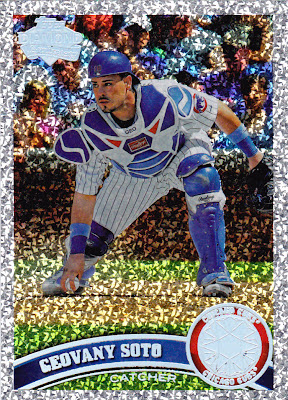 The birthday has come and gone, and I did OK on the card front. The immediate family still doesn't know exactly what I want in terms of my hobby, but they've moved into the general vicinity, and really I'm all right with that.

So, I received a much-needed binder, some packaging material for trades, and a nine-pack assortment of Series 2 Topps and this year's Bowman.

My daughter actually apologized that her gift of four packs of cards was "nothing great." Sweetheart, you have no idea.

I didn't get anything fascinating out of the packs. Just typical trade fare. The diamond Soto here will be headed to Project '62 eventually, in my continuing quest to find something he might want.

I also received some cash, which will go to some card items, which you can expect to see in the not-so-distant future. Prepare to be amazed. Or appalled by my remarkable shopping ineptness.

I also opened a package from my folks. I've mentioned before that they go to auctions. Bunches of them. They don't do it as often as they used to, but it's still an occasional diversion. And, yet, not once have they found any cards for me, even though they've seen cards many a time.

After opening the package, I know that they still haven't produced any cards for me from their many auction visits. But they're getting closer ... 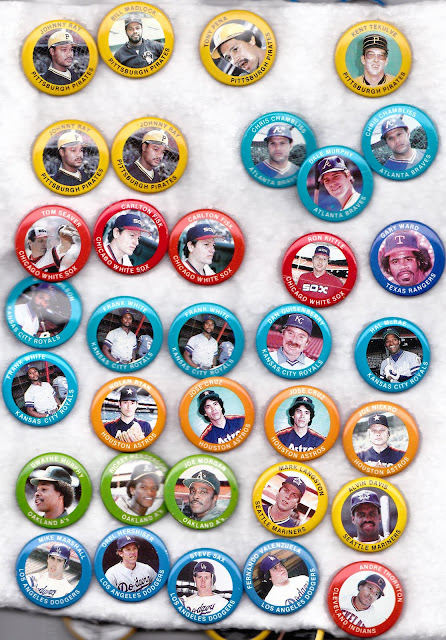 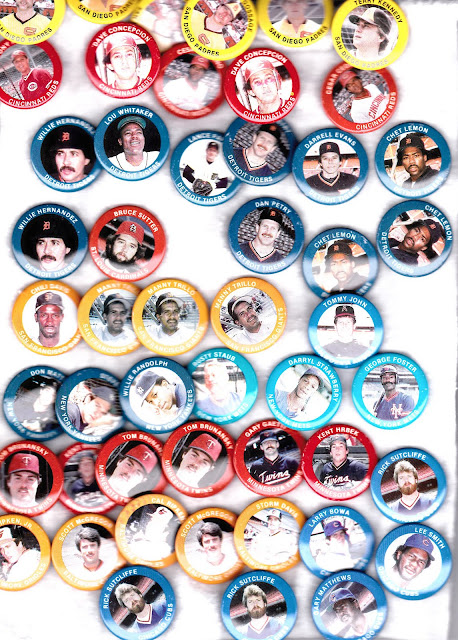 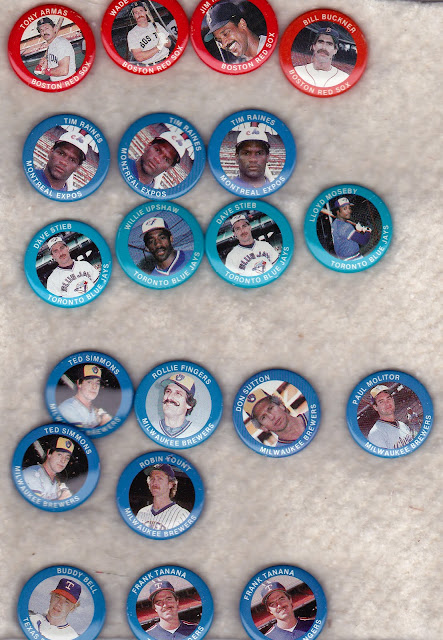 These aren't those early '90s Baseball Buttons that you see everywhere (or at least I do). These are the 1984 Fun Foods Baseball Buttons. I don't know if these were around at my local Greek convenience store where I did my card shopping in the early '80s. I had pretty much moved beyond collecting cards in '84, preferring to buy the whole Topps set instead.

I believe this was an 133-button set. I don't have all 133 buttons. As you can see, there are a number of duplicates. I counted 76 unique buttons in my lot. (Any duplicates are up for trade if anyone cares).

These buttons would've freaked me out as a kid. I hated things you pinned on yourself. I'm still not one for any memorabilia that isn't cards, but I admit these are pretty cool. I like little odd ball stuff like this, and the design is colorful and attractive. It helps that I've barely seen them (although I'm sure you can track them down pretty easily).

I have no idea how I'll store/feature them. I suppose I could find a board display and put them up in the card room. Then I'll have to decide whether I want to get the rest of them.

But at any rate this is a major advancement for my folks. After years of ignoring my No. 1 interest, I've finally broken them down. It'll only be a matter of time before I get them to hunt down 1972 Topps wants in a dank, dusty card shop on the bad side of town.

But this is good!

Spiegel83 said…
Those buttons are pretty cool. May you set aside the Sutcliffe one for me? I have been setting some cards aside for you and should be able to send you a package in a couple weeks. Thanks!
July 18, 2011 at 1:14 AM

Play at the Plate said…
Even if they didn't hit your normal collection on the "button", that's pretty cool of them. As for your daughter's comment, any gift from my kids is cool and I'm sure you feel the same way.
July 18, 2011 at 1:42 AM

madding said…
Looks awesome. I have Joaquin Andujar and George Hendrick from that set, I believe. A blogger (maybe TribeCards?) sent them to me because I still actually have them. I never know how to store stuff like this. If you have any other Cardinals ones, I wouldn't mind them.
July 18, 2011 at 1:42 AM

Offy said…
I'd definitely be interested in the duplicate Hrbek. Love oddball stuff like this.
July 18, 2011 at 1:53 AM

Commishbob said…
I keep my pinback buttons and player coins in 12 pocket sheets in a binder. Those kinds of things have a long history going back at least as far as cards do. Nice haul.
July 18, 2011 at 1:54 AM

Chris Stufflestreet said…
The buttons fit inside the 20-pocket pages that are meant for coins. They were available at a few places around the Watertown area in 1985...they came these little paper packs that held three. I had a small handful back then but lost track of them a couple of years later.

I have the complete set now (picked it up at a National a few years ago...in exchange for helping sort them into sets). A collector I knew must have picked up a case or something...he had thousands of them.

Chris Stufflestreet said…
Oh...and as for Commishbob's comment: watch my blog on Wednesday. I'm featuring a very old pin similar to this one.
July 18, 2011 at 1:59 AM