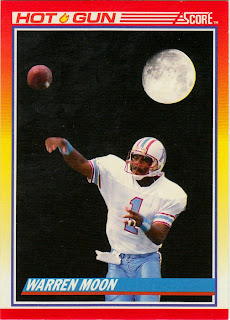 I figured if I'm going to show a football night card, this is the right time to do it. After all, this likely will be my last post until the weekend. And given that I'm taking a break for Thanksgiving, a football card is appropriate. As much as I hate to admit it, no one is thinking about baseball much on Thanksgiving. Football is king.

I don't have many football cards anymore. I sold just about all of them about two years ago. All that's left are a handful with special meaning tucked away in a binder, its location unknown.

But the football cards that Adam of Thoughts and Sox sent me will be reserved for that binder (as soon as I can find it), as well. Adam said it took him two days to find this Warren Moon 1990 Score card. Such dedication should be rewarded.

Also, Adam said he came across this other card when he was searching for the Score card: 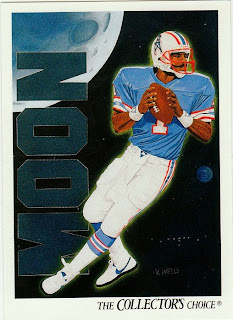 He couldn't have possibly known that Moon and Kenny Stabler were my favorite quarterbacks on my favorite team when I was growing up.

Nor could he have known that the Bills have been my favorite NFL team for quite awhile now when he sent this "night card": 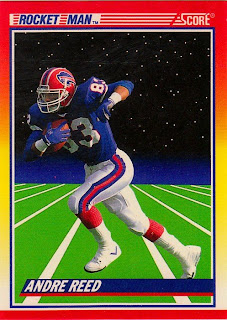 I got a chance to talk to Andre Reed a couple times when I was just starting out as a sportswriter. Of course it was part of a group interview in front of Reed's locker, so it's not like I was able to chat with him one-on-one. Reed had that typical wide receiver vibe, although I certainly wouldn't put him in the category of today's obnoxious receivers.
Then Adam sent me something that, at first, shocked me, then amused me: 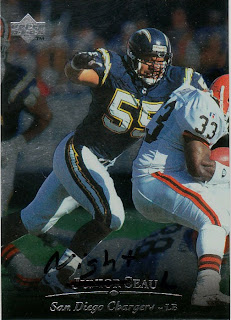 It might be hard to tell on this scan, but on Junior Seau's name Adam crossed out the "Junior" and the "S," and wrote "Night" above "Junior" and tacked on an "L" at the end of the "eau," thus creating, "Night Eaul." Get it? I need to start putting thought like that in my card packages.
The thing that alarmed me initially is I thought Adam penned it directly on the card. Silly me. It was written on the penny sleeve.
Of course, the football cards were only a side part of the package. The intent of the mailing was to send me one of the cards I needed to complete the A&G set. Another card blogger beat him to it, but I'm sure the Wily Mo Pena card will come in handy in some other deal.
Thanks, Adam. I'll be assembling some cards for you soon. Read his blog. There is good stuff on there, especially this post and this one. You have to like someone who appreciates The Bums.
That's about it for a few days. If you haven't voted in the poll at right, take a shot at it. And a happy Thanksgiving to all. Enjoy!

AdamE said…
Glad you liked the night cards. Sorry I couldn't find any baseball ones. Hope you have a good holiday.
November 26, 2008 at 1:58 AM