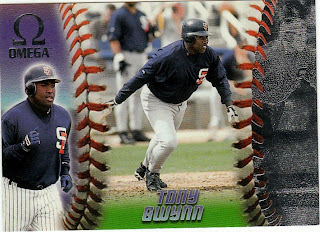 Something has puzzled me ever since I took this card home. It's a 1999 Omega card, one of the many, many sets that Pacific issued in the late 1990s. But I didn't buy it at store or at a card show.

This card was part of a free sample mailing that Pacific apparently distributed to newspaper publications at the time. We would receive a large envelope once or twice a year as Pacific announced yet another set in a fancy PR release. I didn't pay much attention to the cards at the time because I wasn't collecting then, and I found the cards particularly gaudy. 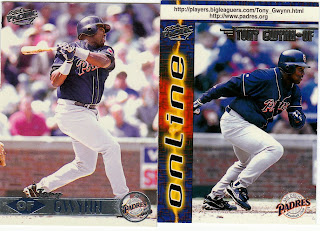 For some reason, the cards Pacific sent in the mailings were always of Tony Gwynn. I would end up taking the cards home because no one else at the office wanted them, and I didn't have the heart to throw them in the trash (I don't think I've ever thrown away a single baseball card ever since my first horrid mistake back in 1974).
But here's the thing; they were free samples, and it's obvious Pacific didn't consider them real cards. Here's what the cards look like on the back: 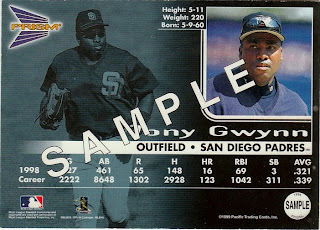 A big "SAMPLE" stamped diagonally across the back with the "E" pressed into Gwynn's jawline.
My question is, do collectors think these are cards? I would imagine they would, especially those who collect the Padres or Tony Gwynn. They'd be extra cool, I would think, because these weren't cards you could find anywhere on the market. But I wonder what kind of value Beckett and their ilk would put on cards like these. Are these cards not considered "real cards" to them? Do people often see sample cards like this on eBay or at card shows? I haven't, although my experience is limited.
Anything's collectible. I know that. But I ask you anyway, are these "cards"? I'd be interested to know people's thoughts.
By the way, I have five or six of these Gwynn cards. They're not in perfect shape, but fairly decent. If anyone is interested in them, I'd be happy to trade something for them. Just send me an email or leave a comment.
(EDIT: It's unanimous: everyone considers them legitmate cards. That's a relief. Some things still make sense in the world. Thanks everyone).

Anonymous said…
I'm sure that a Tony Gwynn or Padres collector would be thrilled to get them. I remember that promos were a very big deal back in the early 90s, though I have no clue how many people care now.
November 17, 2008 at 7:51 AM

dayf said…
Yeah, official Sample or Promo cards from licensed companies are considered legit issues and are collectible (as evidenced by PunkRockPaint). I have a few Sample cards of Maddux, Chipper and Klesko from the '90s somewhere deep in the bowels of my collection. My phonebook-sized price guide does have these listed cards listed and they are all listed at about twice the value of the base Gwynn card. The price guide is from 2002, but I'm guessing it's still about the same.
November 17, 2008 at 12:18 PM

gcrl said…
i think donruss had a deal with beckett where they would insert sample cards into issues of the monthly price guide.
i know i sold an arod sample of something or other on ebay many years ago - moc! so, someone collects 'em. if there were garvey samples, i would too.
November 17, 2008 at 1:18 PM

Spiff said…
They are considered cards and are listed in Beckett. I have several samples in my Pudge and Rangers collections.
November 17, 2008 at 2:48 PM