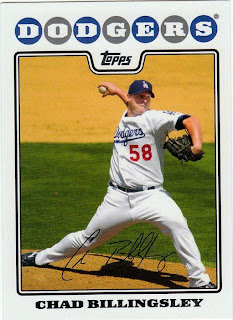 According to various reports, which are pretty vague, Billingsley slipped on some ice in front of his home in Reading, Pa., causing him to break his left fibula. He's expected to be healed in time for spring training.

OK, two questions and one statement:

1. Did Billingsley slip on some ice or did he "slip on some ice." I'm tired of euphemisms when it comes to ballplayer injuries. Come out and say what happened. People are going to talk anyway. You might as well get it out there so you don't have to face so many dumb questions.

2. If he really did slip on some ice, what the hell? He's 24! I slipped and fell on ice when I was a youngster loads of times. I'd pick myself up and be on my merry way. What exactly was he doing when he slipped on the ice?

3. The statement: Colletti, get off your butt and sign Sabathia.

Anonymous said…
There are many, many stupid ways to slip on ice and break something, even if you are under 30. You can probably look up my real name in Google and find some interesting police reports involving me and some ice. (Broken glasses + face = lots and lots of blood on the street.)

I know Billingsley is married. I don't think he has children, but I'm not sure. I know people of all ages can get injured in all kinds of ways. It's just with the vagueness of reported injuries these days, it raises loads of questions.

When the reasons offered for injuries in the cases of Jeff Kent, Joe Beimel, Clint Barmes, etc., don't turn out to be true, people get skittish when they hear stuff like this. Sadly cynical, I know.
November 23, 2008 at 4:48 PM