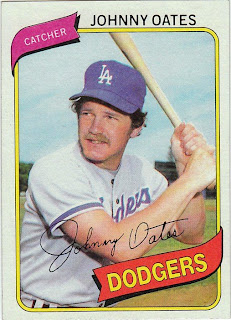 About a week or two ago, I stumbled upon John from the U.K.'s blog, The Pursuit of 80's(ness). I don't know what took me so long. I knew he wrote for A Pack a Day. I just never put it all together.

I never realized he was such a fan of 1980 Topps cards. I found that interesting, because as a kid in 1980 I tried to collect an entire set for the first time. Before then, I was just happy with acquiring some cards. But by 1980, I had matured enough to know what GREED was. And I wanted it all, everything Topps had to offer.

I came close to getting it all, about 14 cards short. And I didn't pick up those 14 cards until a couple of years ago. But how satisfying it was to complete that set.

I thought of all of this when I was looking at The Pursuit of 80's(ness). Then, like magic, a package arrived for me on Friday. It was from John! Without one word of warning, I had received more Dodgers cards!

Included in the tidy stack were a few 1980 Dodgers, like Johnny Oates above. I certainly don't mind doubles of Dodgers, so I enjoyed every card, even the twin Von Joshua cards (one of the few guys who played for the Dodgers, went to the Giants, and then returned to the Dodgers).

Here's a look at some of the cards I didn't have: 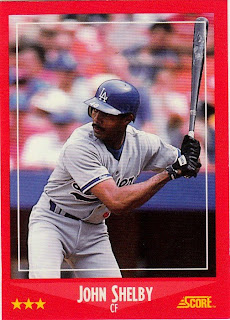 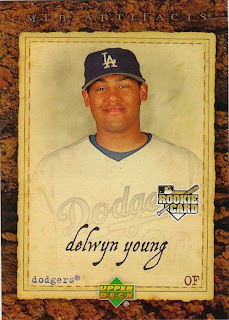 Delwyn Young, 2007 Upper Deck Artifact. These cards always make me think the card is miscut because the framed photo is slapped on there tilted. 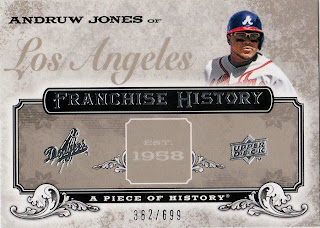 Andruw Jones, UD Piece of History, Franchise History. What a mocking piece of 2 1/2-by-3 1/2 cardboard this turned out to be. A card celebrating Los Angeles Dodgers franchise history, featuring a photo of a guy who wants nothing to do with the team. And then on the back, the write-up gushes over L.A.'s history of excellence, specifically singling out Kirk Gibson's World Series home run in 1988. And the connection between Gibson's HR and Fatty is???
1989 Fleer, show them how it's done: 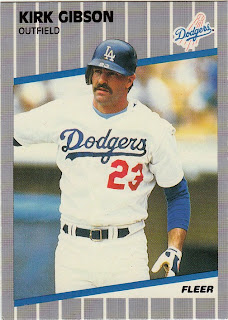 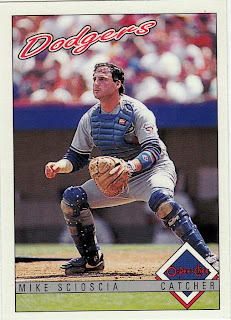 Mike Scioscia, 1993 O-Pee-Chee. A Canadian card sent from an Englishman to an American. I love the Internets. 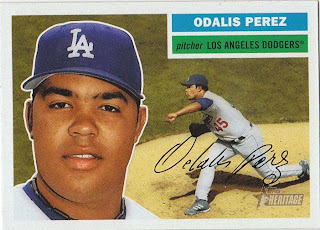 Odalis Perez, 2005 Topps Heritage. I don't know why I didn't pick up on Heritage until 2006. I really like the 1956 Topps set a lot. I've collected about one-third of it. But this is my first Heritage card modeled after that set. 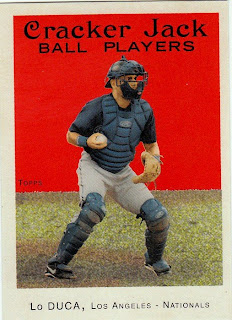 Lastly, Paul LoDuca, 2004 Topps Cracker Jack. Somewhere in my childhood I saw a photograph of the 1915 Cracker Jack set and thought it was the greatest old-time set ever. I still think that. Like I said, I like bright colors. I'm shallow like that. (It's interesting that it says "Los Angeles - Nationals" on the bottom, since Lo Duca ended up with the Nationals, even though, obviously, that's not what the card meant).
John, your Red Sox are about to be mailed out. Thanks again for the trade. Many more cross-Atlantic deals to come, I hope. I'll have to find some 1980 cards for you, too.

steveisjewish said…
What time around did you leave Binghamton? I gotta say I like here, but since my job may be in jeopardy, who knows if I will be sticking around. where abouts in town did you live?
November 12, 2008 at 11:32 PM

I grew up in Binghamton and Endicott. I left the area to go to school in the mid-80s. But I still have family there, so I go back fairly frequently. The area's close enough to key places, yet far enough away, if you know what I mean ...
November 13, 2008 at 2:00 AM