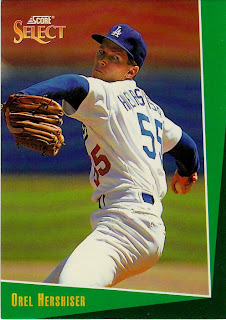 There's a fine art to dumpster diving, ladies and gents. When you spot someone inexplicably tossing baseball cards into the garbage, you musn't lose your head. You must remain focused, poised to plunge headlong into that festering, steaming, 30-foot-long pile of gunk, and
save only the best of the cards from an eternity in landfill hell.
So there I was, swimming through two-week-old banana peels, grandma's forgotten egg salad, and old copies of Sisqo CDs, in an attempt to rescue some Dodgers cards. I swam past the Tigers and Braves, Red Sox and Twins. I did the backstroke past the Yankees and sneared at the Giants as I went by. Then, there, just past some lonely Nationals cards, I spotted my prize -- 370 Dodgers cards. I quickly scooped them up. Mission accomplished, even if I stunk like 1988 Donruss.
Actually, I endured nothing of the sort to rescue my Dodgers. Mark of Stats on the Back never made good on his threat to toss out any cards (at least not that I know of). Instead, he delivered those 370 Dodgers right to my door, and it's taken me days to sort through them all.
Here's a count of some of what he sent:
47 Orel Hershiser cards (That's right. 47. I thought of featuring them all here, but I kind of had some other things to do today).
25 Fernando Valenzuelas
19 Eric Karros cards
18 Darryl Strawberrys
13 Steve Sax cards
12 Pedro Guerreros
9 each of Brett Butler and Ramon Martinez
8 Eddie Murrays
7 each of Kirk Gibson and Todd Hollandsworth
6 Mike Scioscias
Wow. And the cards came from all years and brands. Some real odd ball stuff, too, which I'm growing to appreciate more and more. Here are some of the highlights of some surprisingly clean dumpster cards: 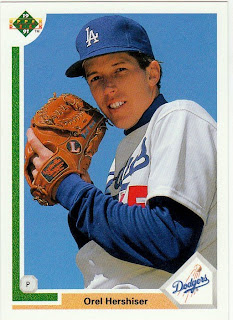 One of the 47 Hershisers. Orel looks about 8 in this 1991 Upper Deck card, even though he had been in the league for seven years by this point. 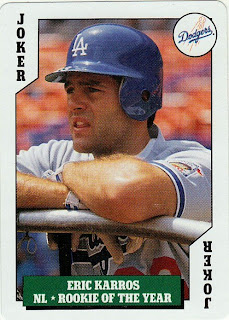 This is what's called "taking something out of context." Can you imagine if there was a baseball card out there where they stamped "Joker" on it? Of course, this is part of one of those early 1990s playing card sets. 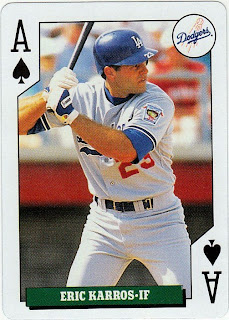 See? That's better. Don't let anybody call you a joker, Eric. Even if they have watched you on Fox's baseball coverage. 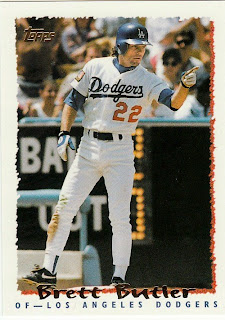 Brett Butler, 1995 Topps. I received quite a few '95 Topps from Mark, which is great, because I always liked this set, but it came during a time when I didn't collect at all. I think I bought two packs that year. And scoreboard cards are always cool. 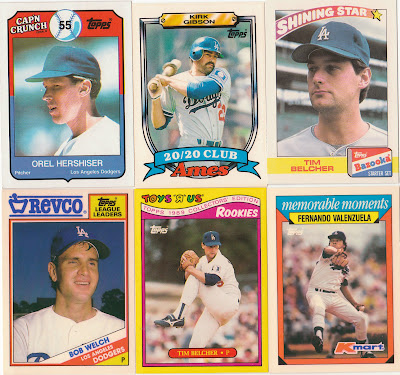 ODDBALLS! Aren't those great? The Bob Welch photo is terrible. He looks like he just woke up, or threw up. One of the two. 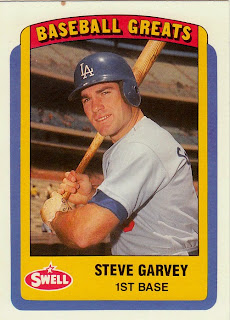 Here's another one. I'm not sure what "Swell" is. Probably a bakery or grocery store or something. I think they just wanted to put the word "Swell" with Steve Garvey. As in "Gee, isn't Steve Garvey swell?" The two do go together. 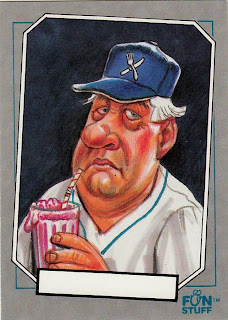 This card cracked me up. I have no idea what it is or what it's from. It's obviously a series of send-up cards on baseball stars, this one being Lasorda. Here's what it says on the back: 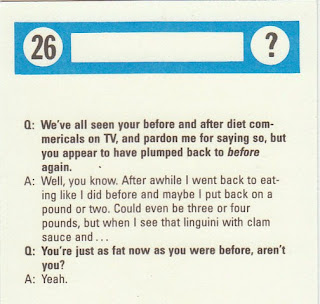 Are they suggesting that Slim-Fast didn't work for Tommy? I'm aghast. Aghast! 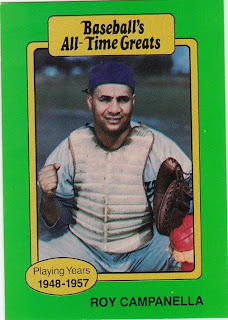 I saw these cards a long time ago and thought they were cool. I never bought any, and I couldn't tell you who made them or what year they were put out because there's no information like that on the card. I'd guess early '80s.
Here are a few "what's going on here?" cards: 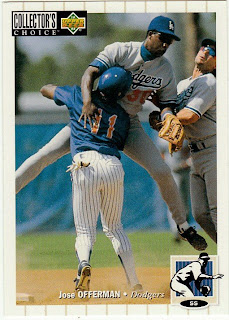 Somebody had to have gotten hurt in this collision. It would've been cool if the photo on the back had them all in a heap clutching their heads. But instead it's a shot of Offerman preparing to throw to first. 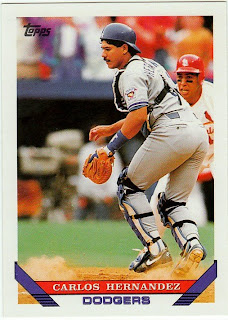 The ball, Carlos! Get the ball! Oh, this is not going to turn out well. 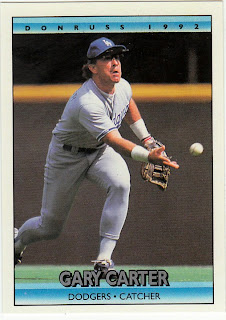 It says "catcher" on Carter's position description on this 1992 Donruss card, but he's obviously tossing the ball to first base in this photo. Carter played 10 games at first base in 1991, so it could have been a photo from one of those games. Or some spring training shot. 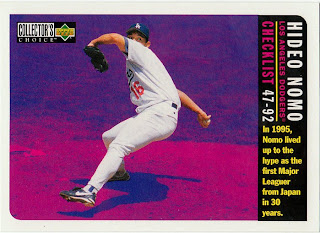 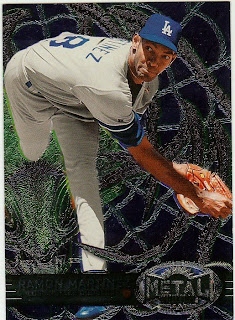 I hope you can see the background on this 1997 Metal Universe card because someone's got to warn Ramon that there's a GIANT, RADIOACTIVE SPIDER RIGHT BEHIND HIM! These cards certainly are different. 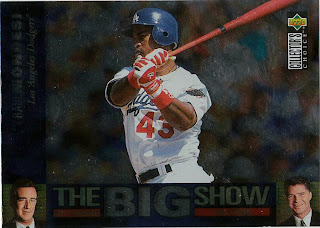 Raul Mondesi, 1997 Collector's Choice insert. When Olbermann and Patrick were the anchors of Sportscenter on ESPN, you couldn't get me away from that show. I loved it. Now it seems like both guys are full of themselves, and even though they're long gone from Sportscenter, I've stopped watching it anyway, for a variety of reasons. 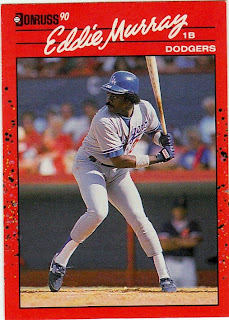 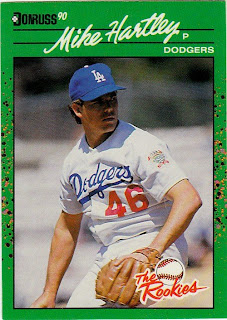 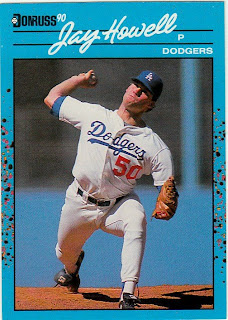 Aren't those color variations cool? I'm trying to decide whether I would have bought more 1990 Donruss if the base set was blue instead of red. I think I might have. 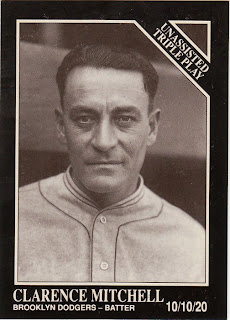 Mark sent along a couple of these early 1990s Sporting News cards, which I like a lot. It's a shame Mitchell is only remembered for hitting into an unassisted triple play during the 1920 World Series. He actually pitched in the majors for 19 years, although for mostly lousy teams so his career marks aren't great. 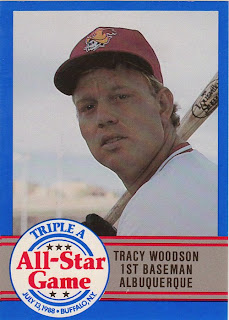 I was living in Buffalo when the Triple All-Star Game was played there in 1988. It was the first such game played and it was played at what was a brand-new park at the time, Pilot Field. I wanted to go to the game, but for whatever reason (probably no funds) I didn't. Woodson, meanwhile, was playing on a World Series champion Dodgers team three months after this game. 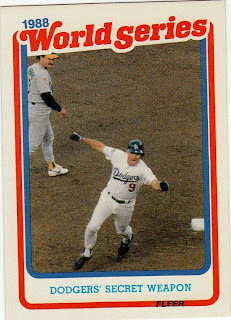 Speaking of the 1988 World Series, I'll end it with Mickey Hatcher tearing around the bases after one of his two World Series homers. Look at Glenn Hubbard's look of disgust. Hatcher was basically the Eric Byrnes of the 1980s. If I didn't know any better, I'd say the two were related. Hatcher did everything at 240 percent. He was a maniac. I don't remember him being as annoying as Byrnes. But I'm probably biased.
Mark, thanks for the cards. Glad I didn't really have to fish through a dumpster. Those things are messy.

Steve Gierman said…
Swell made those individually wrapped pieces of gum with the red, white and blue wrapper that you always ended up with a ton of after trick or treating. I'm assuming it's the same company.

The Lasorda came from a jokey release called Baseball Enquirer.

The Campanella is from Hygrade. 1987, more than likely. I used to have a ton of those. They are lost to the ages now.

dayf said…
Steve beat me to the baseball knowledge :)

I got my package from Mark today too, he has some good stuff in there! I hope someone claims the rest of the oddballs soon or I might have to go digging through his trash...
November 26, 2008 at 12:14 AM