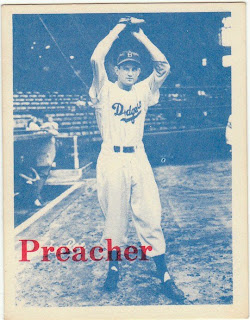 Elwin Charles "Preacher" Roe died Sunday at age 92 (although, his exact age seems to be up for debate).

Roe was one of the "Boys of Summer," a member of the 1952 Brooklyn Dodgers immortalized in Roger Kahn's book. I remember reading the book and thinking that if I was a fan back then, I would really like Preacher. A lot of my favorite players tend to be pitchers. I can identify with them somehow. I especially like the left-handers, because I'm left-handed. Preacher was left-handed, too. And I like the quirky pitchers, and Preacher was quirky.

Preacher was known for throwing the spitter. He was the subject of a famous story in Sports Illustrated in 1955 in which he admitted to using the pitch. Baseball establishment was outraged over such a confession, and Roe was ostracized for a time because of that admission. But what bothered him the most was the fact that people thought that was the only pitch he threw. He actually had a variety of effective pitches.

"I had a wet one and three fake wet ones," he said.

The Dodgers acquired Roe in a trade with the Pirates and he pitched in four straight All-Star Games. He pitched a great game in the 1949 World Series. It was the only game Brooklyn won in that series. 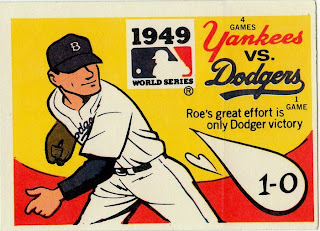 He went 22-3 in 1951. He was a master at manipulating batters. He worked very slowly and was constantly going to the bill of his cap with his hand. Here's an excerpt from "Boys of Summer" of Roe talking about one pitcher-batter encounter:

"Jim Russell with the Braves one day was looking when I went to the cap and he stepped out. He comes back in. I touch the visor again. He moves out. This went on three or four times. Finally, Jim said, 'All right. Throw that son of a bitch. I'll hit it anyway.' He's waiting for that good hard drop. I touch the visor and throw a big slow curve. He was so wound up he couldn't swing. But he spit at the ball as it went by."

Roe willingly played the part of a country bumpkin, but he was well-educated and the son of a doctor. He grew up in Viola, Arkansas (I actually looked it up to see if the town was anywhere near where Dave of Tribe Cards lives, but the two towns are pretty far apart).

There are lots of great stories about Roe. He actually was traded to the Dodgers in part because of a fight he got into during a girls basketball game. He was the coach of a team, and he was punched by an official, hitting his head on the floor and suffering a skull fracture. In "Boys of Summer," he said the ref made a call he didn't like. The ref said, "Shut up." Roe thought he said "Stand up." He stood up and the ref decked him. As a result of the injury, Roe's pitching suffered for a couple of years and the Pirates were all too willing to send him to Brooklyn.

It's sad when people like that aren't around anymore to tell stories like that. But hopefully, Roe will live on in his accomplishments and in the stories other people tell.

AdamE said…
It is sad that Preacher has passed away. He was such a nice guy and a great story teller. I live in the same town that he did and even went to the same church as him. Preacher liked to talk to everybody and was always cheerful. I'm glad my boys got to meet him and even got to play catch with him.
November 11, 2008 at 4:11 PM

night owl said…
That's great, Adam, that you knew him so well. (I read your earlier post about him and the autographs you received). He seemed like a great person to know.
November 11, 2008 at 8:50 PM