November 03, 2008
(Appreciate, according to the Online Etymology Dictionary, came into use as meaning "to esteem or value highly" in 1655. Could they have known about baseball cards in 1655? Naaaaah! But they knew what they liked in 1655! And so do I. It's time for another edition of Cardboard Appreciation. These are my all-time favorites. This is the fourth in a series): 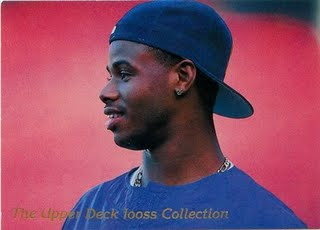 During the early 1990s, there were two "fads" that I wasn't all that crazy about. One was wearing your cap backwards. The other was full-bleed photographs on baseball cards.

I know, I know. Stop looking at me that way. I realize I'm not in line with a lot of people's thinking in this area.

The cap thing I just never understood. I wasn't above trying it. I did it a few times, thought I looked like an idiot, and turned the brim back around. Now, fortunately for me anyway, it seems like the backward cap thing has seen better days (or maybe I'm just getting more accustomed to it). Now if only we could get Sabathia to put that thing on straight.

As for the full-bleed photography, I do get why collectors think it's cool. I get why Topps Stadium Club was such a big deal. The photos, if done right, really get you close to the action. And there are some really great photos on baseball cards. But part of why I collect baseball cards is because of the design on the card. I love looking forward each year to the unveiling of the new design. Card designs give cards character. And it helps you better associate the card with the year, especially when you're looking back on past years. And a lot of full-bleed photo cards don't have much design. They all look the same.

With all the FB cards over the last 15-20 years, I have a hard time figuring out which year is which. I've got to stop and study if I'm trying to figure out whether a card is, say, 2006 Fleer Ultra or 2007 Fleer Ultra.

That's what makes the 1993 Upper Deck Ken Griffey Jr. insert card, the Walter Iooss Collection, such a great card. It's a full-bleed photo and he's wearing his bleeping cap on backwards, and IT DOESN'T MATTER. I don't care about the cap or that the card has virtually no design. In fact, design would kill this card, and a forward cap would kill this card.

Walter Iooss Jr. is the famous sports photographer who is most known for his many, many photographs in Sports Illustrated. And he really captured everything you need to know about Griffey with this photo.

I'm curious to see where Griffey is going to end up next year. I hope it's not the last we'll see of him in a uniform. He always seems to have fun and always makes the game worth watching.

madding said…
One of the reasons I liked 1993 Upper Deck a lot was that it had a lot of insert sets (for the time) and that they majority of them seemed well thought out and designed. Of course, this was right around when every set started to become more about the inserts than the actual set which was pretty huge reason why I stopped collecting for so long. (Starting college and the '94 strike were also heavy contributors.)
November 3, 2008 at 3:57 AM