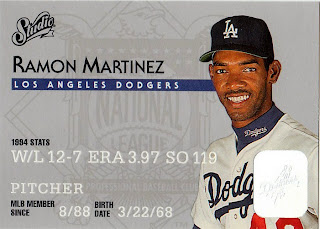 I'm amazed at how quickly some people work in this world. I recently completed a trade with Paul of the blog Paul's Random Stuff. He sent me my cards in record time. Meanwhile, I poked around, slowly assorted a Mets stack and eventually shuffled off to the post office. I think Paul finally received his cards yesterday.

So what happens? He even POSTS the cards he received from me before I post mine, even though the ones he sent me have been sitting on a shelf, waiting patiently, so very, very patiently, LO' THESE MANY YEARS. (Sigh) I so admire effiency.

Anyway, I'm quite enjoying Paul's blog, and even though he talks about 1988 like it's a BAD thing (hey, buddy, that was one of the greatest years of my life you're talking about there), I can let it slide because he's always posting good stuff. You can read about what I sent him here.

Meanwhile, it's about time I featured the Dodgers that I received. Note that almost all of them are from that time period when we consumed cards in mass quantities. Yet, somehow, I did not end up with the cards featured below. That's why, children, you should never burn 1991 Fleer. There is always someone out there less fortunate than you.

On to the cards! 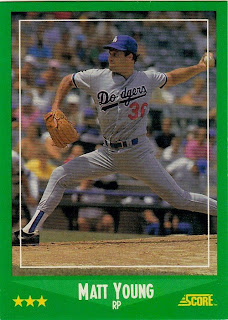 Matt Young, 1988 Score. I have come to a decision. Every time I receive an '88 Score that I do not have, it gets featured on this blog. If I somehow received the whole set, I would HAVE TO, as my duty as an American citizen, start the 1988 Score blog. 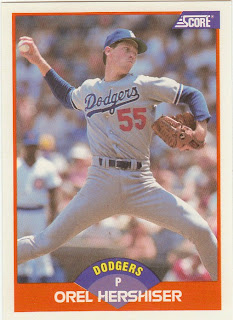 Orel Hershiser, 1989 Score. I received Paul's cards on Monday, back in the good old days when I still had holes in my Orel Hershiser collection. Mark from Stats on the Back took care of that with the box I received Friday (that'll be a whale of a post). My days of seeking Hershiser cards are OVER. 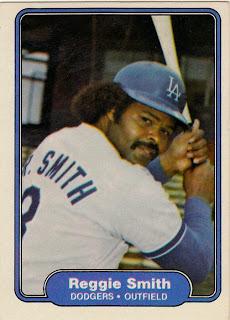 Reggie Smith, 1982 Fleer. Hee-hee, I do not remember Reggie wearing his hair that long. People rip on '82 Fleer for a lot of justifiable reasons. But the color scheme went very well with the Dodgers colors. It made for some decent-looking Dodger cards. If the photos were in focus, of course. 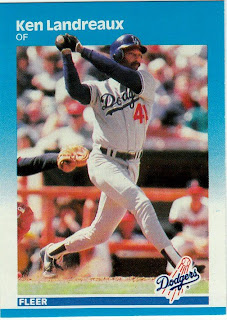 Ken Landreaux, 1987 Fleer. I've already mentioned how nice '87 Fleer looks. When Landreaux came to the Dodgers, I could not have been happier. Honestly, I thought he was going to be the next Willie Mays. I was one delusional child. I set myself up for year after year of disappointment. 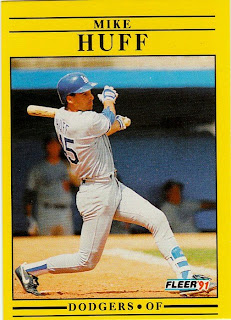 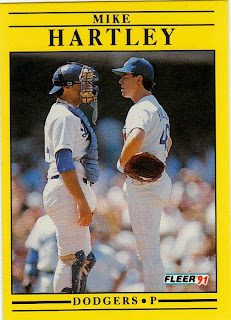 Two more 1991 Fleer! This is the second in a trifecta of traders to send me a bunch of '91 Fleer. I'm going to have to make it my life's work to find a way to make these cards valuable.
Hartley doesn't look happy in this photo. Such contentious Dodgers in '91 Fleer. First Scioscia barking at a umpire and now Hartley jawing at Scioscia (I think it's Scioscia). Something about all that yellow on the card. It's angrying up their blood, or whatever Satchel Paige said. 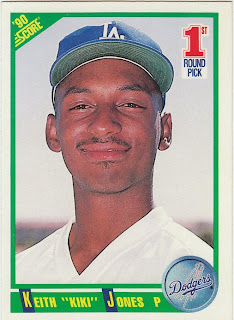 Kiki! This completes the 1990 Score Dodgers set for me. A nice story about Kiki Jones and a baseball fan in this post. 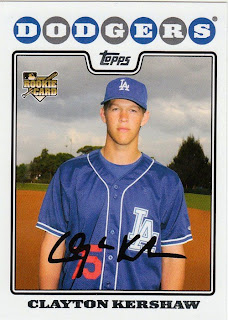 Finally, a card for modern times. Clayton Kershaw, 2008 Topps Updates and Highlights! Once I get my Manny card, I could have all the Dodgers from the set (I'm sort of guessing, I haven't looked at the checklist very closely).
I'm not sure I like the dark clouds that are hovering over Kershaw's head in the photo. Is that some sort of commentary, Topps? Keep your Giant-sympathetic leanings to yourself. I see how many Topps photos are taken at AT&T Park. I know how many Barry Bonds cards you've produced in the last eight years. It all makes sense! Topps has been infiltrated by (shiver) Giants fans! Wow, that really would explain a lot of things.
Anyway, many thanks for the trade, Paul. He's one of a number of fine Mets bloggers out there. I just hope I don't run out of Mets cards to trade.

Anonymous said…
I'm happy that I could help you finish something. Sorry to contribute to overloading you on those ugly yellow Fleer cards, though. :-)

If we believe Beckett, here's a list of the Dodgers in this year's Topps Update base set:

night owl said…
madding -- your Cardinals are stacked and ready. Just to have to go through the packaging/mailing ritual.

andy -- if I ever have extra time (ha!), I see a card-by-card yearly blog coming on. My knowledge of '88 Score is weak, so I'm not sure if that's a good place to start. Collaborating on a blog at some point sounds cool, though.

He was opening a box, not going through the whole set, and it looks like he's done. He posted a few great cards there, such as the very puzzling Bedrosian card I commented on.
November 22, 2008 at 2:38 PM

Ben said…
Yeah I finished the 88 Score box, and with some contributions, I'm 17 cards from the end. Paul, Andy if you guys want some cards to do a complete run through, I've got a box of doubles. If either of you have one of the 17 I need, I'd send a stack in return. Also, Paul, what 88 Score Dodgers do you have? I'll send you any you don't have. email is ben.keever at gmail dot com.
November 23, 2008 at 12:56 AM