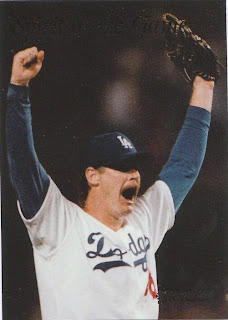 Ah, the perils of gold foil. There's no use in making the letters all fancy and shiny if nobody can READ them! Isn't that right, 2008 Upper Deck?

Actually, this is 1993 Donruss, but you can see by UD's base set offering this past year that somone hasn't learned much in 15 years.

In defense of the '93 card, gold-foil technology (which is a smidge behind micro-laser brain surgery technology on the world-wide criticalness factor scale) was in its infancy. That gold pixie dust, or whatever they used back then, was bound to fade. But I guess no one thought of that.

In case you've never seen this card, it's a Spirit of the Game subset card from the Donruss base set. "Spirit of the Game" is written in script at the top (if you look at Kevin Gross' glove you can see it). And "Donruss" is in the bottom right corner.

This card commemorates the no-hitter that Kevin Gross threw against the Giants while with the Dodgers on Aug. 18, 1992. Gross was 5-12 going into that game (the Dodgers finished last that season, partly because they were sending pitchers like Gross to the mound), but ended up throwing the first no-hitter of the season. The Dodgers won 2-0.

Here's a line from the New York Times story on the no-hitter: "Until tonight, Gross was perhaps best known for a 10-day suspension in 1987 when he was caught with sandpaper in his glove while pitching with the Phillies." That's something to put on your tombstone.

Gross had four very mediocre seasons for the Dodgers. But without that one no-hitter, the Dodgers would not lead all of baseball in no-hitters thrown for a franchise. The Dodgers have 20, one more than the Red Sox. And it was one of four no-hitters the Dodgers threw in the 1990s, tied with the 1960s (when Koufax had all four) for the most in any decade by the Dodgers.

gcrl said…
i remember listening to this game. i believe it was his wedding anniversary. i recall vin scully closing the game call with a reference to an anniversary to remember. not quite 'throw your sombrero to the sky'.
November 19, 2008 at 11:41 PM