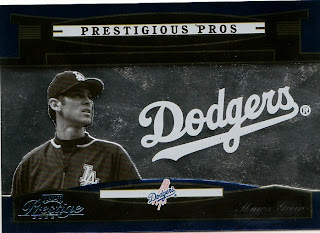 I'm assuming THAT title goes to dayf, right? I've thought that for awhile now, and that was even before I saw this. But after saying that, I don't think Eric S. is very far behind.

Eric has astounded card bloggers all over this country with his generous card packages. All he asks for are some Yankees in return. If you don't have as many cards as he gave you, no biggie, because he's trying to streamline his collection. And that's not such a bad thing is it? I'm going to try that streamlining thing real soon. But first I have like seven sets to complete.

Anyway, Eric bowled me over when his package arrived Saturday. It was the biggest box I have received to date and it was packed with Dodgers. Almost 300 cards, and he sent several brands that I have yet to see. So, once again, here are the highlights: 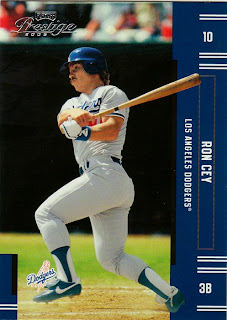 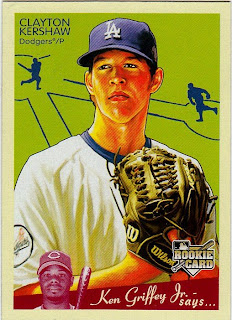 Clayton Kershaw, 2008 Upper Deck Goudey. I've mentioned before that I'm not a player collector. But if I did collect a specific player of today, here's the guy. 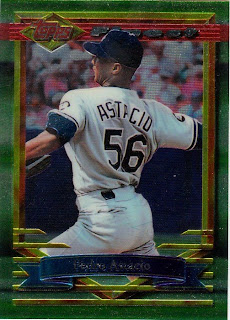 Pedro Astacio, 1994 Topps Finest. Not only is this card all kinds of shiny, but it looks like something you'd see on the midway at some state fair. Every color of the rainbow in that card. 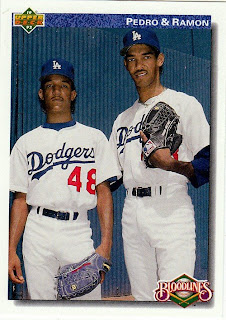 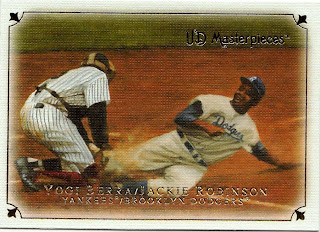 2007 Upper Deck Masterpieces. UD commemorating Robinson's steal of home in the 1955 World Series. Yogi Berra insists to this day that Robinson was out. 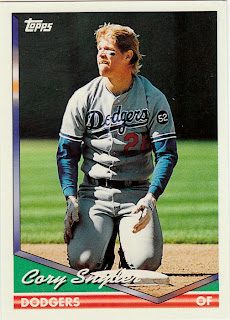 Cory Snyder, 1994 Topps. Yup, that's about how I remember Snyder's career as a Dodger.

Eric sent several nice Nomar Garciaparra cards. The first is a clever attempt to hide Garciaparra's Cubs logo, although not clever enough. (But UD, thankfully, appears to be above photoshopping): 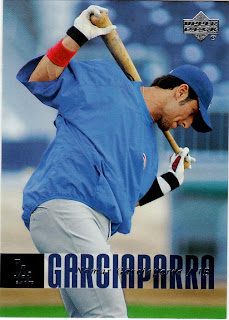 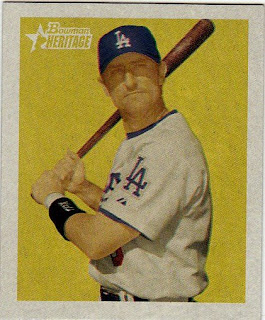 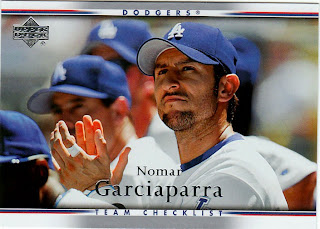 There, that's a nice going-away present for Garciaparra. Wish us Dodger fans got to know you more, Nomar. 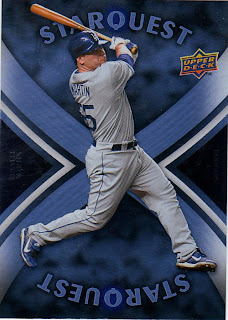 Eric sent Russell Martin UD Starquest parallels in silver, green, gold and blue. This is more of a cornflower blue, according to the box of 64 Crayola crayons I had as a kid. 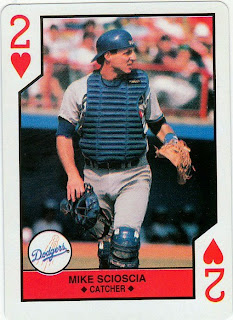 I don't have enough oddball cards, so this is a nice addition. Am I the only one who looks at this card and thinks of Stacey Q? 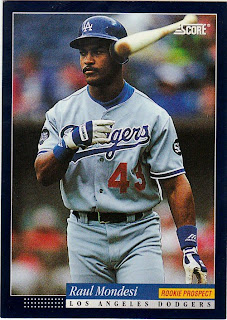 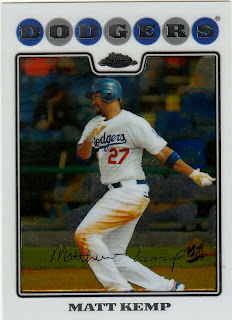 Matt Kemp, 2008 Topps Chrome. I think most would agree that I'm an old-school collector. I like tradition. I like vintage cards. I collect sets. But I veer wildly away from that template when it comes to chrome. Love it. Fantastic idea. 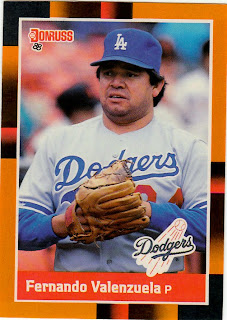 Fernando Valenzuela, 1988 Donruss Baseball's Best. Believe it or not, the first time I saw these cards was when I read Cards on Cards' Halloween post. madding picked the perfect cards. 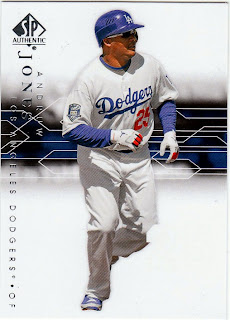 Andruw Jones, 2008 Upper Deck SP Authentic. These cards do nothing for me, and Jones did nothing for the Dodgers. A perfect fit. 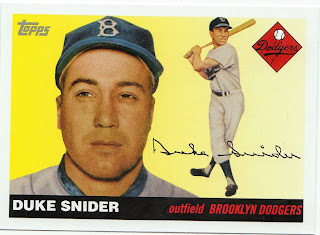 Duke Snider, 2004 Topps reprint insert. Sweet! Apparently, Duke is a surprisingly quick signer. I saw it on one of the card blogs, and now I've forgotten which one. 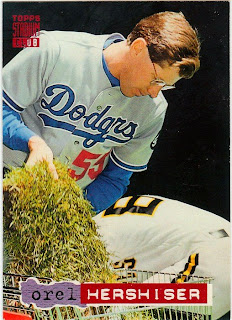 Orel Hershiser, 1994 Topps Stadium Club. Could Stadium Club dork up Hershiser a little more? He's not exactly He-Man, but do you have to show him gardening? 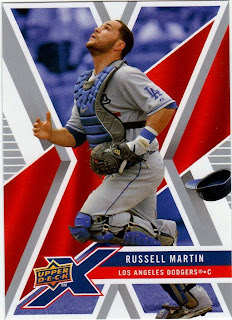 Russell Martin, 2008 Upper Deck X. Oooh, my first Upper Deck X card. Possibly my last, too. But don't let that stop you. I welcome any and all Dodgers. 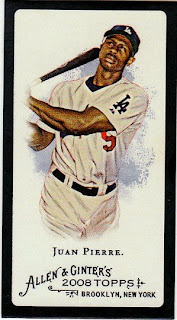 But even this card isn't as nice as this one: 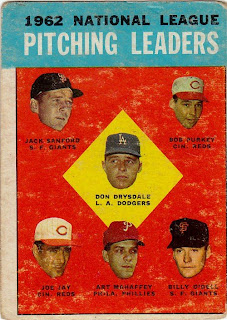 1963 Topps Pitching Leaders. Wow! Do I care that it's miscut? No. Do I care that it looks like I sandpapered my kitchen cupboards with it? No. It's a card from 1963!
Quite a collection of nobodies surrounding Drysdale, huh? I know hardcore fans know who Jack Sanford, Bob Purkey, Joe Jay, Art Mahaffey and Billy O'Dell are, but a whole mess of fans have no idea, and that's a shame because they won, respectively, 24, 23, 21, 19 and 19 games in 1962. Makes you wonder how many people will remember Cliff Lee 40 years from now.

Eric, you clearly outdid yourself AGAIN. The Yankee pile for you is accumulating nicely and should be ready to fly off on its own to your residence in a matter of days. And I promise, no Carl Pavanos!

Joe Martelli Jr. said…
2 cards I've never seen before. Pedro and Ramon, Ramon looks like he's gonna kill the camera man. The other one, Orel separating his canibus stash!
November 6, 2008 at 2:31 AM

Slette said…
I think the best part about sending stuff out (aside from getting cards back) is reading the commentary on cards bloggers pick out. I never would have expected to see the Cory Snyder or Martinez brothers card highlighted - loved the dummy comment, by the way.

I have more Dodgers to send your way too, probably when I head home for Thanksgiving. If I can just find people who collect the Mariners, Blue Jays, Diamondbacks or Pirates (as well as Yankees - I have lots o' doubles), my collection will finally be tailored down to a level of girlfriend-acceptance.
November 6, 2008 at 10:31 AM

Today we will mail out a small packet to you including the two A&Gs and also the 2007 Topps Takashi. We are trading that one for the smiling Takashi you sent Lucy that is now among her favorite cards!
November 6, 2008 at 12:28 PM