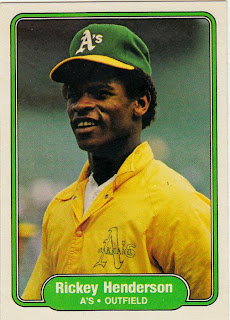 Not only was Rickey Henderson one of the most talented players ever, he was one of the most entertaining, just from a quotebook standpoint. There are web sites devoted to Henderson's quotes, and there have been some wonderful articles written about him. If you haven't read Tom Verducci's Sports Illustrated article "What Is Rickey Henderson Doing in Newark?" from about five years back, and you want to be entertained, head to SI's archives and give it a read.

The reason I bring all of this up is Man of Steal from Rickey Henderson Collectibles and I arranged a team trade. And since Man of Steal is Man of Steal and Night Owl is Night Owl, that means a trade of A's for Dodgers. I'm glad Brad wasn't looking for Henderson cards from me because I'm pretty certain he's got every single one I have. You don't put the man's name in your blog title without having a few of his cards.

I received Man of Steal's cards a few days ago, and am just getting around to posting them after my Thanksgiving road trip. I can tell he put quite a bit of thought into these Dodgers as a lot of them aren't your average cards. He expressed the universal collector's concern, hoping that I need most of them. Not to worry, Brad. Out of the 65 you sent, I needed 50. Good deal.

Just some of the highlights: 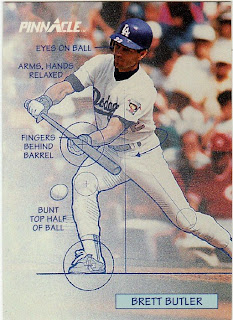 Brett Butler, 1992 Pinnacle, The Technician subset. This card arrived a few days after I was doing research for my new gig as a contributor to Things Done to Cards. It just so happened that I came upon this post, which detailed this subset to my complete satisfaction. So now I know all about it, and don't have to broadcast my cluelessness (don't worry, I'll be doing that later in the post).

I like the first sentence on the back of Butler's card: "Bunting is an essential part of a hitter's repertoire." Yup, Ryan Howard's bunting ALL the time. 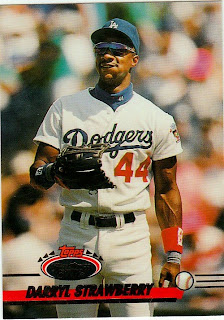 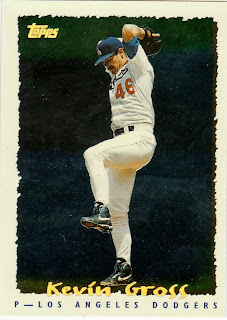 Kevin Gross, 1995 Topps, cyberstats variation. Did they have cyber variations for every player? The reason I ask is I thought the season projections on the back (in light of the 1994 strike) were kind of cool, but was anybody really curious to see if Gross would end up with that 13-11 record for the year? I understand projections for Frank Thomas or Will Clark, but Gross? 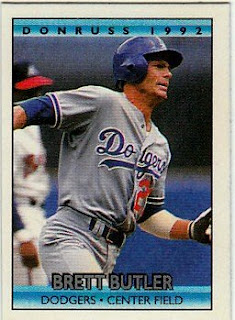 Brett Butler, 1992 Donruss Cracker Jack. This card, at 1 1/4-by-1 3/4 inches is officially the smallest card I have. It's even smaller than those micro cards they put out in the early 1990s. (EDIT: It's smaller than some of the mini cards of early '90s, but not smaller than the micros). I guess these were found in individual boxes of Cracker Jacks? 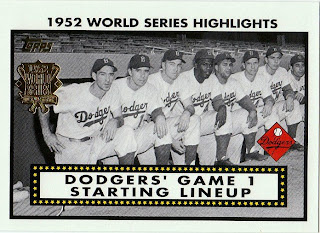 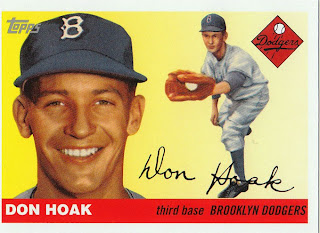 Two modern-day cards depicting the Brooklyn Dodgers of the 1950s. That's a trend I like. 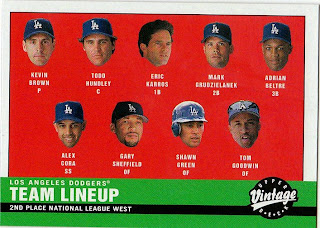 Dodgers checklist, 2001 Upper Deck Vintage. UD Vintage stealing all kinds of Topps ideas with this card. The Vintage series of that year "borrowed" from the 1963 Topps design, and the disembodied heads look appeared on the Cubs and White Sox checklists periodically through the 1960s and 1970s as well as on some league leaders cards.
Note that Karros is the only one without a cap. 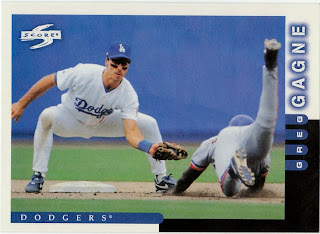 Greg Gagne, 1998 Score. I'm just featuring this to show the great sliding technique of this unknown Montreal Expo. And he is sooooo out. 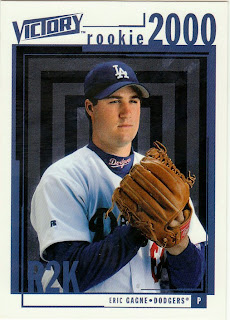 Eric Gagne, 2000 Victory. Not the picture you conjure up when someone says Eric Gagne, eh? When Gagne was first starting out, broadcasters would call him Eric GAG-nee, like Greg GAG-nee. Of course, Eric is French-Canadian and anyone who follows hockey knows how Canadians pronounce Gagne. Just ask a Flyers fan. 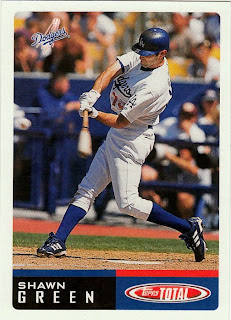 Shawn Green, 2002 Topps Total. Topps, please, you are not the ruler of all. You shouldn't be allowed to determine which players are most deserving of receiving cards and which ones aren't. Include everyone. I don't need ridiculous combo cards. (I don't care how many of them feature Russell Martin). Bring back Topps Total! 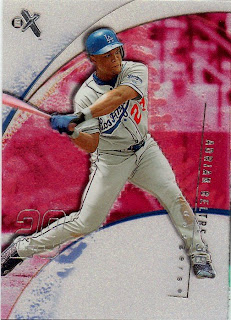 Adrian Beltre, 2002 Fleer E-X. This is a funky-looking card. Too gimicky for my taste. The silver part (it scans silver, but is actually gold) is see-thru. Once again, this is all new to me. 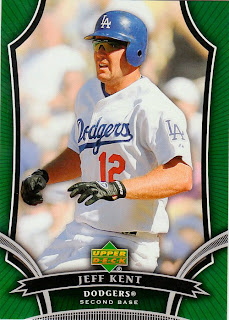 Jeff Kent, 2007 Upper Deck, but I don't know what Upper Deck set it is. Help, anyone? It's card 37 of 60, but there's nothing that says anything else about the set. An MLB Players Association issue perhaps? 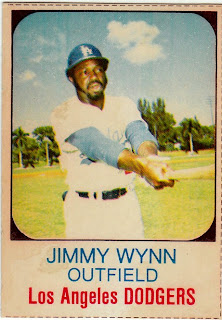 Finally, a goody from when the Dodgers and A's were both king. A 1975 Hostess Twinkie Jimmy Wynn. When I saw this card I could feel the smile move across my face. Hostess Twinkie cards remind me of sitting in a booth at the corner kitchen table at my grandmother's. She always had Twinkies for us. Me and my brother would open the Twinkies by the light of the overhead lantern and find a way to split up the cards that were pictured on the stained, bottom piece of cardboard.
Wynn was a bit before my time, but I always thought he was cool, and wished he had spent more time with the Dodgers and not as much time with the Astros.
Brad, thanks a bunch for the cards. Night Owl being Night Owl, I've got some catching up to do, but your cards will be in the mail very soon.

Anonymous said…
Is that really Eric Gagne or is that some sort of error card? ;)

night owl said…
I haven't checked my email since Tuesday, Nicole. If you sent it before then, I think it's a problem on your end. Otherwise, I just need to get to my email (maybe tomorrow).
November 30, 2008 at 2:48 AM

madding said…
Laurens is right about the Kent card according to the Beckett website.

If you're talking about the Topps Micro cards that I'm thinking of, they are actually significantly smaller (and thinner) than the Cracker Jack cards. I like mini cards as much as the next guy, but I'm more of a fan of the tobacco card-sized stuff they put out now than the super small cards that I always drop on the floor.
November 30, 2008 at 5:45 AM

night owl said…
You're right, madding, I forgot about those super-small Topps Micro cards. I think I had some of the '92 ones, but then sold them. I'm with you on cards that small. I like the A&G minis, but the others are just too small.

ManOfSteal said…
Glad you enjoyed the cards Night Owl! To confirm the identification of the Kent card, I did get it during a stay at a Holiday Inn last year. I remember when giveaways of cards like this were common, and now they are few and far between.
November 30, 2008 at 3:55 PM