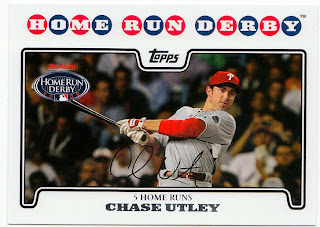 I am sooooooooooooooo tired of the 2008 Topps design that I have very little interest in pursuing many of the cards in the new Updates & Highlights series (I did buy a couple packs yesterday and they were too mediocre to show here). But this is one of the cards, when I saw it originally, that made me think "it'd be nice to own that one." It's a night card, of course. It's a horizontal card, which is always a bonus. And it's foul-mouthed Chutley! He is one great player.

I have this card thanks to Matt F. of Heartbreaking Cards of Staggering Genius. It was one of TWO packages I received from him this week. The other contains my goodies from winning his contest. I hope to show those late tonight or tomorrow (the nasty job is getting in the way of my posting). They're worth waiting for.

Matt was diligent enough to search out cards that featured night games and almost all of the cards he sent contained photos with a flourescent glow. Great stuff. Night has fallen here in the Northeast, so let's get this after hours party started: 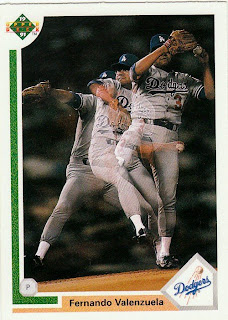 1991 Upper Deck, Fernando Valenzuela. One of the three-exposure photographs that card companies went all ga-ga over during the early 1990s. Me, not so much. But how can you not like Fernando? 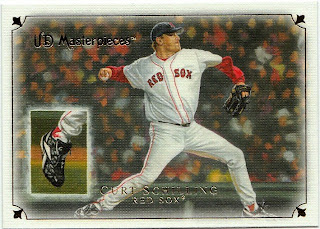 Curt Schilling, 2007 UD Masterpieces. Matt has a flair for thinking outside the box here. This is the first night card that I have received that is a painting. If Gary Thorn has a signed copy of this card from Curt Schilling, that'd be totally cool. 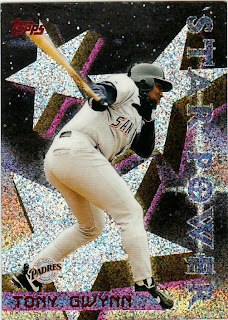 Tony Gwynn, 1996 Topps, Star Power insert. Here's a card with a night sky backdrop, but obviously not picturing an actual game. It's VERY sparkly. I think this is a parallel card since Matt also sent what appears to be the base card. I collected nil from 1996, so I'm not clear on that. 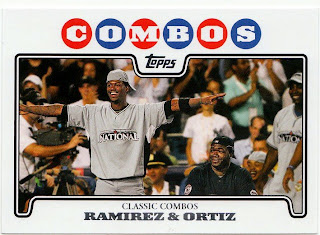 Hanley Ramirez and David Ortiz, 2008 Topps Updates & Highlights Combos. They're stretching the Combos theme a bit with this card. Ortiz barely stands out. Why not make it "Ramirez & Security Guard" or "Ramirez & Guy in Green Shirt applauding"?

Matt added a note that said the new U&Hs are ripe with night shots, and they are because of all the All-Star Game photos. It's one of the things U&H has going for it. 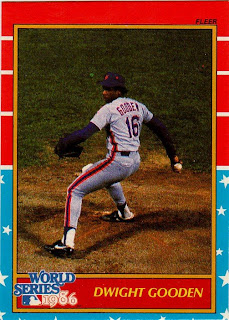 Dwight Gooden, 1987 Fleer, World Series insert. This card makes it look like 1986 was back in ancient times. For some of you maybe it was, but I watched the '86 World Series when I was in college, and believe me, back then we were on the cusp of technological innovation with that new-fangled video cassette recorder thingy. 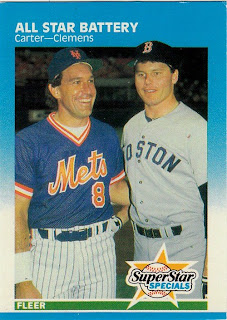 Gary Carter and Roger Clemens, 1987 SuperStar Specials. Another 1986 moment, this time from the All-Star Game. They should have titled it "Dazed and Confused." One or both of them is looking at the wrong camera. 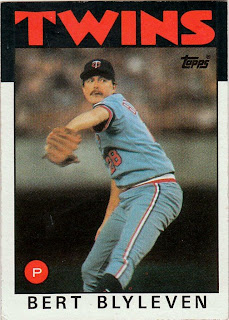 Bert Blyleven, 1986 Topps. This card is doubly great because it's a night card AND it's a card from a set that I'm collecting that I don't have. AND it's Blyleven (I will not repeat Chris Berman's nickname here. Boomer's got to go).

Finally, Matt sent me two 1971 Topps cards that I do not have. We are both big fans of the '71s and I sent a couple to him as well. 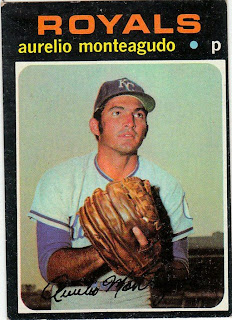 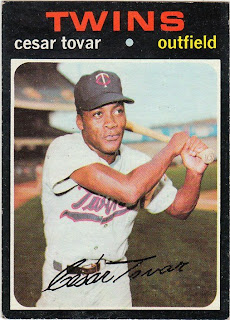 1971 Cesar Tovar. Sadly, both of these players died within four years of each other.

The two '71s brings my completion percentage for the set to 59.4%. So close and yet (no Munson, no Aaron, no Mays, no Clemente yet) so far.

Thanks, Matt. More cards from the great state of Kansas coming to this site soon!