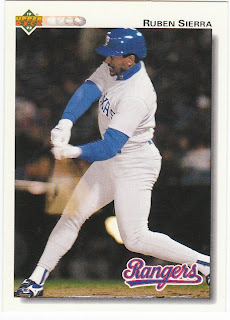 I've had this lovely item teed up for a night card feature for awhile, and then Matt F. from Heartbreaking Cards sent me a few night cards and this one was in the stack. That can only mean one thing: the night card gods have spoken. I can only acquiesce.

The best thing about this 1992 Upper Deck card of Ruben Sierra is not the point-of-impact shot, the blurry bat on blurry ball. It's something just to the north of that. It's those fantastic, glow-in-the-dark batting gloves. Look at those radioactive beauties.

This was part of my rambling thought process during a period of time otherwise known as working for my paycheck. But, hey, the mind wanders.

And then the mind wandered into a wonderful, brilliant idea: GLOW-IN-THE-DARK BASEBALL CARDS!!! I got so excited I couldn't focus. What a great brainstorm! Sure it's a little juvenile, but still ... get Topps on the phone! Get me Upper Deck! Get me the patent office! I've found my ticket out of this stinking, podunk town!!!!! I'll be rich, I'll be famous, they can call the cards NIGHT OWL CARDS!!!!!!!!

And then this quiet, more logical voice in my head said: pssst, better do an Internet search.

So I did. Turns out it's been done before. Sigh.

Maybe one of the card companies will bring glow-in-the-dark cards back? Please? For me? (and make it affordable).

zman40 said…
The Casper Ghosts had glow-in-the-dark-hats this past year.
http://web.minorleaguebaseball.com/news/article.jsp?ymd=20071031&content_id=319251&vkey=news_milb&fext=.jsp
Plus, I was going through an album the other day and I ran across a UD glow in the dark insert. Don't know what set it's from off the top of my head, but I'll let you know.
November 13, 2008 at 3:50 AM