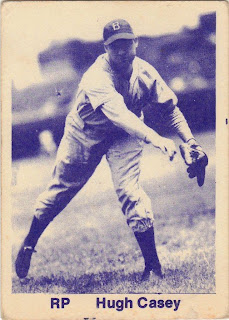 Much better. No more "Rip Master" at the top of this blog.

That's what I like about these cards. Looking at them is like taking a bath and washing all the 1-of-1 muck and cut-auto gunk right off you. No hyperventilating talk about how the card you just pulled features a jersey and a bat and a base and a stadium seat and a plastic nacho holder from your favorite stadium. Just a photo of old-time Dodger reliever Hugh Casey in the ballpark grass.

This is another TCMA set, much like the beautiful blue cards I featured a couple of months ago. This set was printed a year later than the '52 Dodger cards, but I actually bought this set first. It's the first set I ever purchased from a catalog.

Like the other TCMA set, it is refreshingly simple. All of the cards feature the same backs: 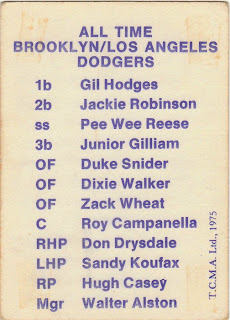 It's a list of what TCMA selected (at least I think they did the selecting) for the all-time Dodger team at that point. (You can see at the top of the card the tape marks from where I once had them mounted on something. I don't remember what). 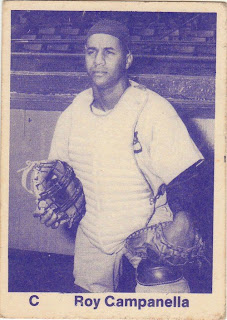 The fronts are all displayed with a purple tint. I like all of the photos that were selected even though some of them I've seen a number of times before. (I remember as a young teenager reading the story of Campanella's car accident, and for years I was freaked out about sliding on a patch of ice while driving. I actually did spin out on some ice while driving on a highway late at night while coming home from work when I was in college. An image of Campanella flashed in my mind at the time. Fortunately, it was very late at night and there was no one else on the road). 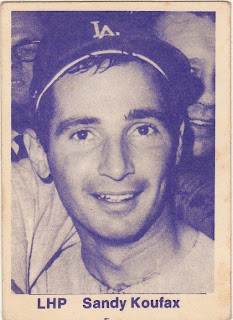 Here's the photo of Koufax, I believe, after he pitched his perfect game. I'm not 100 percent sure on that. But I know I've seen the picture a bunch of times. 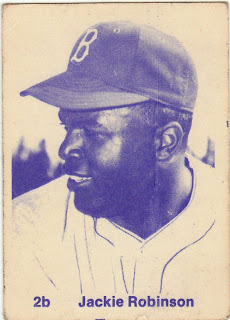 This is probably my favorite card in the set. I like the all-white background that frames Robinson.

The best part about this set is all the cards are of star players, and you've got the whole set in 12 cards. No short prints, no variations, nothing to clutter up your life. Just 12 simple cards. 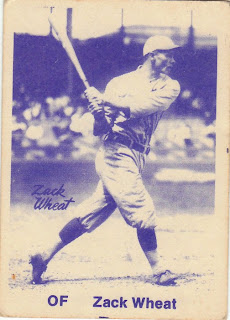 AND a set that features Zack Wheat! Which is awesome. Wheat is easily the best Dodgers player of the dead-ball era, elected into the Hall of Fame in 1959, and still the all-time Dodgers leader in a bunch of career offensive categories (games, at-bats, hits, total bases, doubles, triples) even though he quit playing for Brooklyn 82 years ago.

These cards are so old and beat up now that I can pick them up without worrying about dings or anything else. They're STRESS-FREE CARDS! No tweezers, no top-loaders, nada!

I will take this group of cards over almost everything on the market today. Card companies need to stop pandering and start thinking about what makes the game great, and that is the actual human beings who play the game. Not uniforms, not ink, not inanimate objects. People. Paying tribute to the game's history doesn't mean you cut up a bunch of documents to slap signatures on some "cards" (I don't even consider them cards) with a speck of a photo that looks like it was an afterthought.

If one of the card companies was smart of enough to create sets similar to the old TCMA sets, but with perhaps a modern feel, I'd be at their front door like a happy little puppy. (Allen & Ginter is similar to what I'm talking about, but it's infested with short-prints and relics).

Maybe I'd be the only one in line, I don't know. But I'm a big believer in keeping things simple, in a lot of aspects of my life. I'm sure everyone's heard about KISS. It's the answer to a lot of things in the world. I think collectors would be a lot happier, whether they realize they would be or not, if card companies subscribed more to this principle.

Dinged Corners said…
You know, maybe the cards of an era reflect the players of an era. Bling is an important aspect of current players, and so go the cards.

night owl said…
That's an excellent point, DC. I think you're right. To me, the bling cards are too busy, extra clutter that take away from the subject of the card. Others see it differently I guess.
November 8, 2008 at 10:57 PM