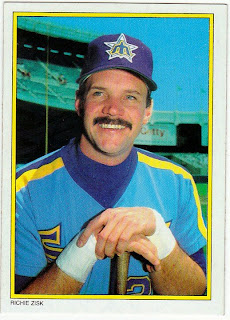 I like to keep my work life separate from my blog life. But there is one area where they intersect, and that is where "brush with greatness" comes in.

I write about sports for a living. I was a sports reporter for a number of years, and now I am an editor, but I still do some writing and reporting. I work at a small newspaper. I never pursued a big-time paper job mostly because I wanted to raise a family and not cart them from place to place.

So, because my paper is concerned with the local scene, I've spent years going to high school and college sporting events. It's actually an enjoyable career, even if it's a lot of hard work, doesn't pay a heck of a lot, and is pressure-packed. It's certainly not as glamorous as it seems to people outside my profession.

There is one area where it IS glamorous, though. Despite the fact that my job is mainly about local sports (I have covered everything from field hockey to walleye fishing to sled dog racing), I have been lucky enough to interview a number of famous athletes. Not a ton, but a fair amount, mostly in baseball, football and hockey.

My favorite part, obviously, has been talking to the baseball players. For the most part, they have been great. A lot of them are shockingly pleasant and willing to treat you like a human being. There have been a couple bad eggs. I plan to discuss on this blog both the good and the bad ones.

For now, I'm talking about one of the good eggs, Richie Zisk, who I interviewed about four years ago. The interview came about because he is good friends with another person currently working in major league baseball (I won't name him now because that's a story for another post). I was working on a story on this other person and wanted to talk to Zisk to get another voice in the story. I relayed my cell phone number for Zisk to call, half expecting -- as every reporter does when they request an interview with someone relatively famous -- that he wouldn't call me.

But later the next day I was relaxing in the living room when my phone rang. I answered it and the voice on the other end said, "This is Richie Zisk. How are you?"

I'm pretty sure I had an out-of-body experience at that point. By then, I had talked to a number of pro athletes, but something about Zisk was different. Zisk was part of my childhood, and a part of the beginnings of my baseball card collecting. The Pirates were battling it out with the Phillies for status as my Plan B team, and Zisk, along with Al Oliver and Manny Sanguillen, were the players I liked the most.

So while Zisk was talking and I was talking, I kept thinking about this: It was one of the 200 or so 1975 Topps cards I collected as a 10-year-old during my very first year of collecting. It was one of my favorite cards.

Actually, more accurately, I was thinking about this ... 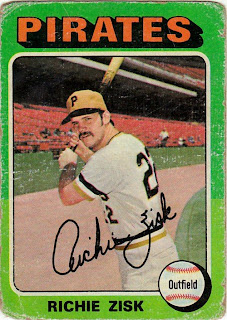 Anyway, Zisk was as cordial and helpful as he possibly could be. He was working as a hitting coach for the minor league Daytona Cubs (I believe he's still employed there). We talked for 15-20 minutes. Believe me, it was all I could do to keep myself from telling Zisk, "Hang on a minute, Richie, I need to put you on hold," and then calling my brother in Rhode Island and saying:
"You won't believe who I have on the phone! Richie Zisk!!!!!! ... I AM NOT lying! It's Richie! No joke! I can't (bad word) believe it!"

But I was nothing but professional. At least I think I was. Like I said, I believe I was floating above my body for those 20 minutes.

The conversation we had wasn't all that thrilling. It was basically anecdotes about the person I was writing about. But from what I could gather from that conversation, Zisk seems like a great, upstanding guy. And it's totally cool that I got to talk to him.

Goose Joak said…
What an awesome story, and so true. I'd like to think I could level with most of my favorite ballplayers today. But stick me in front of Ozzie Smith? I'd be eight years old all over again.
December 20, 2008 at 1:21 AM