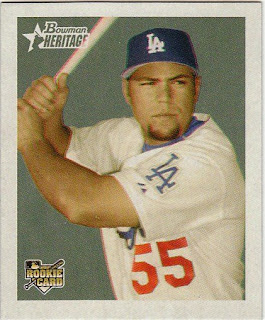 When I first started this blog, I stepped into the trading scene somewhat cautiously. My main intent with the blog was simply to write about baseball cards, whatever came into my head. I'm a writer, first and foremost. Trading sounded cool, but it wasn't my main objective.

My, how things have changed in just over two months. I'm in deep when it comes to trades, and it's all very excellent. Meanwhile, some new blogs have started up recently, and the proprietor of one, The Easy Life, certainly didn't follow my lead. Steve is a trading machine. I see news of his trades all over Blogtopia even though his blog isn't even a month old.

That's great. And what's even better are the cards that Steve sends in trades. Not only did he give me the final two cards for my Allen & Ginter set, but the card pile he sent me contained more inserts, parallels and jersey cards than I've seen in such a trade to date. This is definitely a case of quality over quantity.

I don't list all the cards I get in trades very often, just because I have a tendency to space out when reading other lists. (That's totally my fault for doing that, by the way). But I'll do it this once so you get an idea of the quality that Steve sent:

So here are the pictures to go with the numbers: 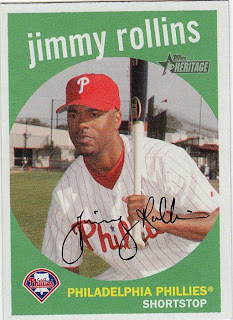 Jimmy Rollins, 2008 Topps Heritage. This is one of the black backs. Eighteen Heritage cards helped put a modest dent in my want list, but I still have a LONG way to go. I laugh at the high-numbered series. Just keep piling it on, Topps. It's not like I have a job or a family or a life or anything.

By the way, the Rollins photo looked familiar to me, and that's because it's also on this card: 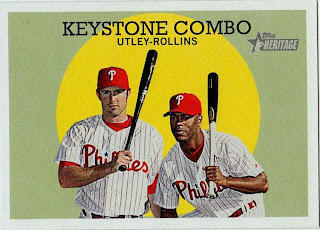 I guess that's something they might've done in 1959. But I think this is one area where Topps could have strayed from the template and found a different photo of J-Roll. 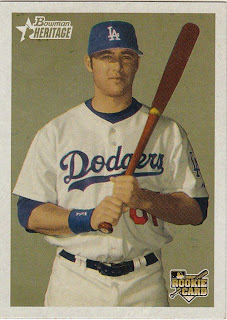 Andre Ethier, 2006 Bowman Heritage. I wasn't crazy about the background colors on this set (I'm aware that it's modeled after the '49 Bowman set). Ethier, on the other hand, is the man. 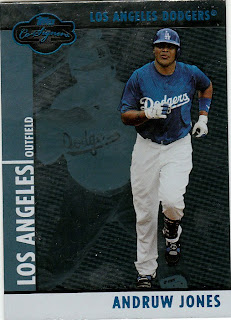 Andruw Jones, 2008 Topps Co-Signers. No. 211/250. The scan makes this card look worse than it is, but I still don't get Co-Signers at all. Someone needs to explain both the concept and the design of this set to me. 'Cause I'm lost. 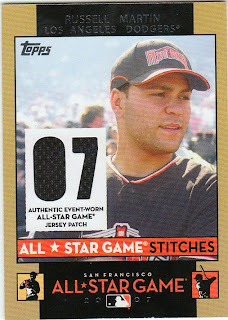 Russell Martin, 2007 Topps Updates & Highlights jersey patch card. Very nice. The only thing that ruins it is that now Giants fans get a picture of what Martin would look like in black and orange. Take a long look, rooters of the wrong team, because that's as close as you're going to get. Russell looks better in blue. 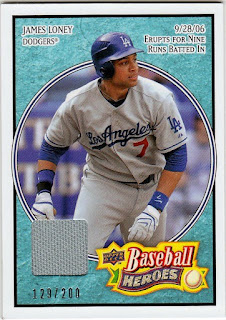 James Loney, 2008 Baseball Heroes, "Game-Used Baseball Card." Whatever that means. These cards ARE super-thick as was mentioned earlier here. But it's easily my favorite card from the package. And very generous of Steve.
Again, I have my work cut out for me. Cards coming your way, Steve, but I'm in search of more quality to send you.

deal said…
so why the heck does billingsley live in Reading PA? I don't think he is from here is he?

In his defense the weather he was awful on Friday. I work with a lot of people who live out that way and they had a miserable time getting here. fortunately I live in a different direction and we had no real snow/ice trouble. very strange weather that day.
November 25, 2008 at 8:59 AM

steveisjewish said…
I am very happy that you enjoyed the package my friend. It's good to see the cards go to where they will be loved more. Just kept in a pile on a desk! Take care and have a great holiday
November 25, 2008 at 11:34 AM

night owl said…
I don't know why Billingsley lives in Reading. Maybe his wife's from the area? He's originally from Ohio, so it's not that far away.
November 25, 2008 at 11:50 AM