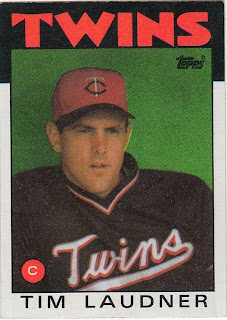 I was always a pretty good student in school. Even through the toughest math classes in high school, I'd end up with decent grades. I had one math teacher who was particularly demanding, particularly tough and liked to yell. Only the smartest of the smart made it through his classes unscathed. Unfortunately, I wasn't one of those unscathed. I would start out "scathed" and then build slowly through the year until I was kind of half-scathed or a quarter-scathed.

My teacher recognized this, and he would do something that rattled me every time he said it. He would pass out the results of a particularly nonsensical math test, something that only the braniacs in the class could survive, and yell about the low grades he was handing out. Then he's give me my paper and he'd say, sort of so I was the only one who could hear: "Night Owl, you know better than that." (Yes, even then they called me "night owl." What? You don't believe me?)

"You know better than that." Ouch. That hit me. Every time.

But that's how I feel about 1986 Topps. For years, Topps stuck to this gradual evolutionary scale. Each suceeding year the cards would improve, the photography would improve. You might not like the design each time, but each year you could see how it was a little bit more sophisticated or modern than the previous year. And that's how it went, all the way through the 1980s. Until 1986, when Topps seemed to just throw up its hands and say, ah, to hell with it, I'm skipping school this year.

What was with 1986? The photography was like something out of the early '70s. Blurry, out-of-focus photos. Photos like the shot of Tim Laudner up top that looks like it was photographed through Desert Storm night-vision goggles. Poorly chosen photos or poses. The card design appealed to me because the team names were in bright, bold colors. But the design was very simplistic all the way around. And I don't know where they got that font for the team names.

I saw the cards that year and thought, Topps, seriously, you know better than that.

Believe it or not, I'm collecting this set because of all of those reasons. It's kind of like taking in a stray kitten. Sure it might have seven toes and look at you cross-eyed, but you can't help giving it a home. There's nothing that would please me more than filling an entire binder with a completely imperfect, yet complete, 1986 Topps set.

I just heard that I might receive a gift of a bunch of 1986 Topps from somewhere in the midwest. That's great news. But in the meantime, I have some 1986 Topps and a few Dodgers to show that I received in a generous package from dayf, who in my opinion has the best card blog out there, Cardboard Junkie.

I'm a big fan of quirky. And Cardboard Junkie does quirky to the fullest. And, in its own backward way, 1986 Topps is quirky, too. So let's take a look at quirky, shall we? 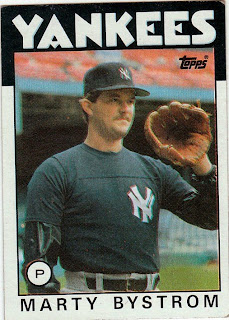 Not only is this photo blurry, but the whole card is kind of out of register. And it features a fallen-on-hard-times Marty Bystrom, wearing the classic T-shirt over a windbreaker look. Bystrom pitched just eight games in 1985 and had an ERA of 5.71. And dad-gum that was good enough for 1986 Topps. 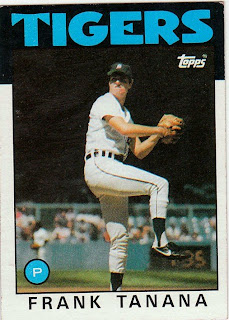 A faraway, sort-of off-center, in-the-shadows shot of Frank Tanana. But at least you know the photo was taken at 1:35 p.m. 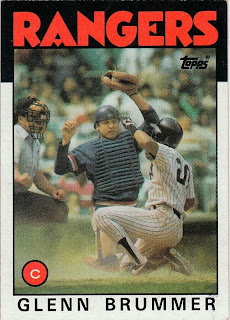 I just like this photo because it's a Yankee getting called out at home. You want to know why I loved the 1980s? The Yankees sucked. Such a sweet, sweet decade. (EDIT: The Yankees actually were on their way to sucking in the '80s. Kind of a slow, steady decline until they hit bottom in early '90s. But even in the '80s it was nice seeing another team consistently beat them out for the title after their domination from 1976-81). 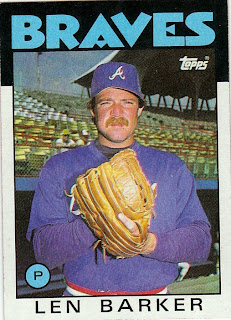 I'm certain the two guys sitting behind Barker are saying, "We traded Brett Butler, Brook Jacoby, Rick Behenna AND $150 grand for this guy and he's gotten us 10 wins in three years?" 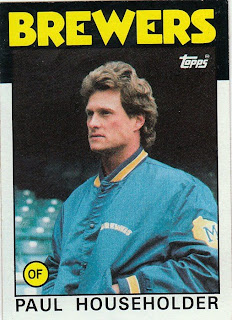 Too bad Householder never played for L.A. What Hollywood could do with that head of hair. He'd have a guest spot on Magnum P.I. for sure. 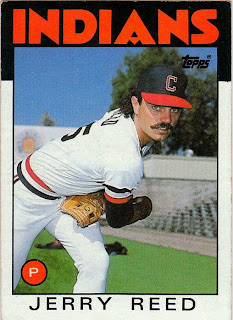 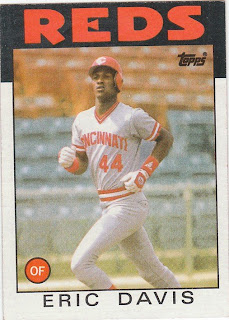 Eric Davis. Full of life and promise, a spring in his step, and not a hint of what was to come with the Dodgers.
Speaking of the Dodgers, here are some other goodies from Cardboard Junkie: 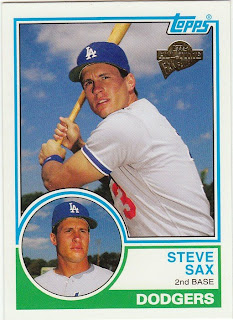 Steve Sax, 2003 Topps Fan Favorites. I should try to get complete sets of all of the Fan Favorites cards. I love them. I'll have to update my want list with those. 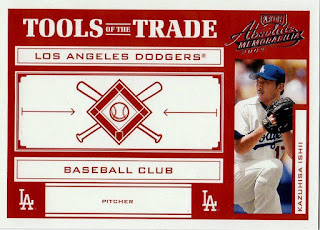 Kaz Ishii, 2004 Playoff Absolute Memorabilia, 44/200. Oh lord, this is one of those modern cards that I don't get. I'm not familiar with them at all. Did some cards feature jersey pieces or autographs where the diamond is? Because if not, the card has me awfully confused. 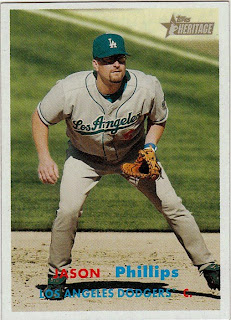 Jason Phillips, 2006 Topps Heritage. The first Jason Phillips card I've received from a blogger! You may laugh, but after seeing lots of Fernandos, Hideos and Orels, it's good to see someone new. 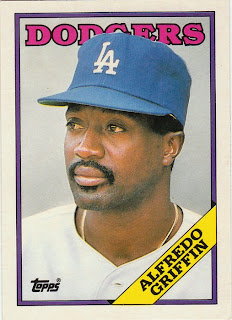 Alfredo Griffin, 1988 Topps Traded. This card reminds me that I need an '88 Topps Traded Jay Howell card. It's for a blog post. I can't do it until I track down the card. 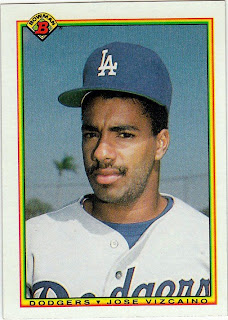 Jose Vizcaino, 1990 Bowman Rookie card. I dare you to look at this card with a straight face. C'mon he WANTS you to laugh! Look at how high his cap is! That has to be the highest cap in the history of baseball card photographs. Someone find me one higher, because right now this is the pinnacle. Jose has Thanksgiving dinner under that cap.
Thanks again, dayf. I've got a tidy card pile started for you, but I've got to do some more digging before sending it out.

Dave said…
Maybe it's just because it was the first set that I collected in mass quantities, but I loved 1986 Topps when it came out. Looking back though, the design isn't as good as the other Topps sets from the mid to late 1980s.

night owl said…
Dave, thanks for the clarification. I just remembered that the Yankees never made the Series after 1981 during the '80s, but, you're right, they were still competitive until the early '90s. I made the edit.
November 23, 2008 at 12:22 PM

Jeffrey Wolfe said…
I don't why but I absolutely love '86 Topps, there's something iconic about the simple design, instantly recognizable, totally classic. And look at it this way, it set the stage for the beautiful '87 set.
November 23, 2008 at 3:07 PM

I Am The Average Joe said…
I love the 1986 Topps. Its nice to see some comments agree with me. I also have a ton of doubles for the set. I am working on completing it too. I'll check through your want list and see what I have. I haven't put up my 86 want list yet but now that I know there's someone else out there with them I will put it up soon. I'll keep you posted on what I find. I've also added you to my blog list
November 23, 2008 at 7:15 PM

steveisjewish said…
I got this complete set this summer as a present during a contest I help amonst my friends... I still need to page it up, but im sure i have doubles chillin' somewhere
November 23, 2008 at 7:57 PM

night owl said…
Thanks for the offers guys. Like I said in the post, I've got a bunch of '86 cards on the way, from Heartbreaking Cards. After the dust settles from that, I'll see what I got left and I'll be happy to get another deal going.
November 23, 2008 at 8:26 PM