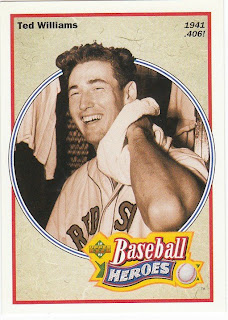 My father is a veteran. He did not serve during wartime, but he did serve during a time of high anxiety in our country (the mid-1950s).

My father's favorite team is the Red Sox and his favorite player is Ted Williams. Williams, of course, served as a U.S. Marine Corps pilot. My dad also knew something about planes, serving in the U.S. Air Force.

My dad doesn't talk about his time in the service much. But a couple of years ago he did tell me and my wife one story that I couldn't believe had never come up before. My dad was scheduled to go on a flight to somewhere in the Pacific, but for some reason, at the last minute, didn't go (I don't recall the specific reason). The flight ended up crashing. And the people on the plane died.

If having your own father narrowly cheat death doesn't make you ponder your own existence then nothing will.

Here's to all of the veterans who put their lives in harm's way, whether they are part of a military conflict or just preparing for one. Thank you.