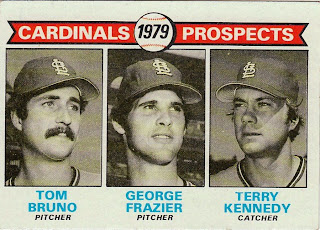 This fits right in line with what I was saying in my Bat Around post, so I thought I'd pick this Brush with Greatness subject this time around.

I'm pretty sure most of you don't know who Tom Bruno is. Out of the three guys on that 1979 Topps Cardinals Prospects card, Bruno is the unknown. The two other players had respectable careers, especially Terry Kennedy. I didn't know who Bruno was either, until I was told to cover a professional walleye tournament for my local paper.

It was September of 1994 and major league baseball had just canceled the rest of the season because of the strike. I was told there was a former major leaguer among the pro anglers competing in the tournament. That player was Bruno. He agreed to an interview, and we had a very nice conversation by the harbor.

Bruno was making his living competing on the pro fishing circuit. He told me he fished throughout his life, and when he played in the majors (he pitched in 69 games for the Cardinals, Royals and Blue Jays between 1976-79), he would find the best fishing spots in whatever city his team was in and join other ballplayers for a day at the lake. When players came into his town, he'd take them out fishing.

He enjoyed fishing so much that after his baseball career was over he left to fish in Mexico for several months. He kept several odd jobs after baseball just to pay bills, then when he and his wife split up, he decided to fish full-time.

We talked about the cancellation of the World Series, his financial situation and his good fortune in being able to earn a living doing two of the things he loved most, play baseball and fish. He was friendly, down-home and entertaining. It was a great conversation.

I like to collect a card of every major leaguer that I interview, and with one or two exceptions I have. But after talking to Bruno, I figured that would never happen. I didn't remember seeing him on a card. I looked him up in a price guide and couldn't find anything (this was before the Internet was widely used).

Then a few years later I was re-organizing some cards, and I came across the '79 Topps card. There was Tom Bruno! I had my card!

The best I can tell, Bruno is still involved in fishing. It appears he operates a couple of fishing-related businesses. I'm glad I got to talk to him. Otherwise he would have been just that guy on a card with Terry Kennedy and George Frazier.

Dave said…
Great story - I'm wondering who the one or two exceptions are. Where they a**holes? My aunt is a movie critic for a big newspaper and I always love hearing her stories about interviewing the Hollywood celebs...
November 22, 2008 at 12:52 PM

night owl said…
No, the reason I don't have the cards of one or two is not because they were jerks, but just because I haven't gotten around to acquiring them. I actually don't know how many I don't have, but I'm pretty sure it's no more than two.

That's part of the reason I'm doing "brush with greatness." I'll be able to figure out which interview subjects I ain't got yet.
November 22, 2008 at 1:16 PM

Anonymous said…
Stumbled upon your article and I'm glad I found it. I knew Tom when he played for the Cardinals and often wondered where he ended up.
September 11, 2009 at 5:12 PM