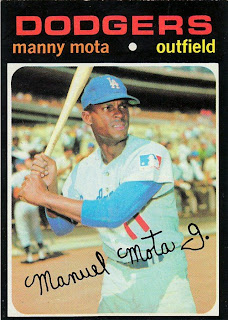 When you were a kid, what was the oldest baseball card that you had ever seen? Not the oldest that you ever spotted in a book or a magazine, but the oldest you had held in your hands, whether it was card you owned or not?

For me, it was a 1971 Topps Manny Mota. Not the one pictured here. This is a lovely updated model. The one that I saw was literally lying in the gutter. I was walking home from school one day and I saw it crumpled along the road side, trembling, injured badly. I picked it up gently. It was in terrible shape. Creases and folds everywhere. Parts torn off of it. I took it home, and bandaged it in Scotch tape, but I could do nothing for the gaping hole in Mota's midsection. So I just slapped some more tape on it and hoped for the best. That Mota card survived, and it lasted a long time in its shoebox home before I bought this new one.

Back then, to me, the 1971 Topps set was the most ancient set I ever knew. It was so OLD. Only my friends' older (and meaner) brothers had heard of that set. Some actually had a card or two of those '71s. I loved the design and the radical black borders. From that point, I realized that I had to have as many as those pitch-black cards as possible.

Over the years I've collected '71 cards at an agonizingly slow pace. The set is one of the great set collector challenges, thanks to its rare high number cards, its expensive star cards, and its easily chipped black borders. I love the set for the challenge it presents, but also for a host of other reasons.

I love the card backs that displayed what was then the revolutionary idea of featuring mug shots of the individual players. I also love the early 70s green they used on the back (I don't like the single year of stats, though). But I mostly love the card fronts. I love the colorful type on the black background. The all-lower case type for the name and position.

It's such a great of-its-era set. And it gives you a glimpse of a time that almost everyone has forgotten ... 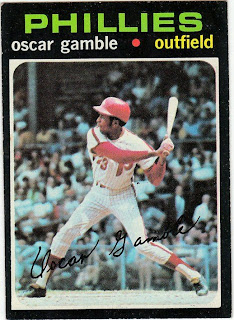 ... a time when Oscar Gamble wasn't a Yankee or an Indian or a Padre, and didn't yet possess that wonderful afro. ... 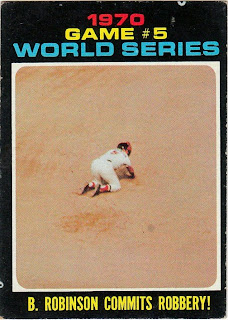 ... a time when they took action shots from, perhaps, the blimp hovering over the stadium? You need a telescope to see the ball in Robinson's glove. (And how about those three different colors of type at the top. Great stuff!) 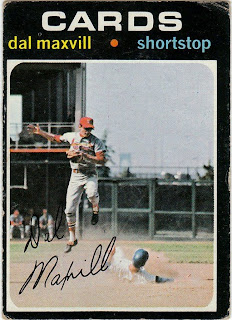 The photos were wonderfully amateurish, but perfect at the same time. Pay no attention to the upper right quadrant of sky in this photo. Check out instead Maxvill's artful leap in his fantastic throwback Cardinal uniform, over a dusty, unidentified Met. 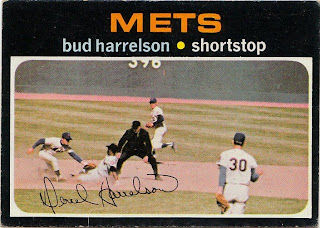 Here is Bud Harrelson (that IS Bud, right?) tagging out a runner as Nolan Ryan famously gives the "out" sign.

But that Ryan shot isn't as famous as THIS one ... 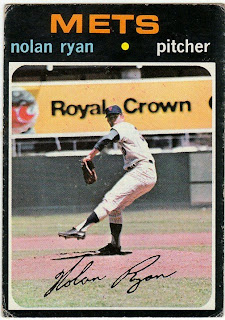 ... I picked up this card decades ago, for absolutely FREE. What a great card. Anybody thirsty? 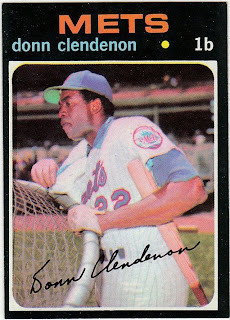 For some reason, probably because they were such a good team in the early 1970s, the Mets had some of the best cards in the set. I really like this pensive Clendenon shot. 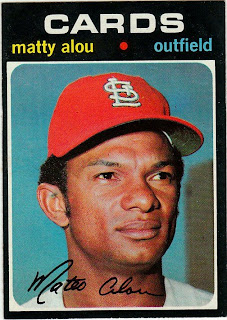 The colors seem so much brighter in this set. Here is a high-numbered card of Matty Alou, another one of my favorites.

I'm happy to know that there are other bloggers out there who have a great interest in collecting the '71 set. The knowledge of that alone has made me turn to my '71 cards with a renewed interest. It's truly one of the best sets out there, far better than a lot of today's cards. 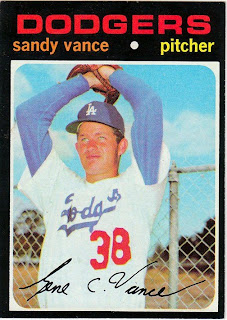 Someday, the Dodgers' lesser-known Sandy will be part of my complete set of 1971s. But until I cash that winning lottery ticket, I'll be happy with the 58 percent of the set that I currently own.

madding said…
That Dal Maxvill card is amazing looking. But he holds a special place in my heart for being the GM presiding over an era of Cardinals baseball that went from Whiteyball to DollarStoreBall.
November 4, 2008 at 7:00 AM

gcrl said…
mine was a 1971 reggie jackson. saved from the bargain bin at the first card show i went to, circa 1979. there was a 66 mays in there, too, but i picked reggie.

i always thought that brooks robinson card looked like he was searching for droids on tatooine.
November 4, 2008 at 7:59 AM

Joe Martelli Jr. said…
That Brooks Robinson card is amazing. It's like he's climbing a hill in the sahara desert. How is it possible no one else is in that shot? Where's the shortstop?
November 4, 2008 at 11:12 AM

Joe S. said…
The oldest cards I had randomly acquired were early 80s Fleer. Not sure how I got them considering I was born in 82, and they were never of anyone good, but I thought they were ANCIENT!
November 4, 2008 at 1:44 PM

Anonymous said…
When I started collecting, the oldest cards I had were some 1982 Fleer cards that I must have inherited from somebody. (My memory, much like the set's photography, is a bit fuzzy.)

Before I stopped collecting in the mid-90s, I had inherited a handful of 1969 Topps cards, including a Tom Seaver and Nolan Ryan, that I still have. Those I can get nostalgic about.
November 4, 2008 at 5:14 PM

deal said…
My oldest card as a kit was also a 1971 - Curt Flood. I also love this set for all the same reasons you have mentioned. I only have about 50 or so of these, but it is on my list of sets to collect.

I have my own post on the 71 set and the Flood card in the thinking about stage. should be good off-season material.
November 5, 2008 at 9:21 AM

I just found your wonderful blog this evening, so this is my first post, and unfortunatley its a horror story.

My father passed away in 2001, and left me a little bit o money. After doing everything rightous, (paying off bills etc) I decided to take a little bit and spend it frivolously. I started collecting baeball cards in 1973, and in the two years previous I had been able to nearly complete the 73 set. (7 cards short). So in this instance I decided to go after the Black Beauties, the 1971 Topps set.
I hit ebay in earnest and soon hit upon a 498-card set. It had stars, it had clean checklists and it had some high numbers. i bid and got it for about $125. I then spent the next 2-3 yeaRS SECURING the other cards I needed...until I was just 12 cards short.

Here is where the horror comes in. On Father's day, 2004, while I was driving home from a lunch date with wifey, my son called my cell. Our 10-gallon aquarium and begun leaking profusely. No problem, just clean it up right? WRONG. The aquariium was positioned on top of a bookcase, below which were my 1971 and 1973 topps, in binders!
I raced home... to find the 1973 set intact, but the black beauties took a hard hit...out of 740 mint to near mint cards... I lost 264 cards to water damage. After I pulled out the ruins and put the remainder in a new binder with new sheets, I never looked at thenm again. Until tonight.

I now have 474 cards of the sweet and they are all good-to NM- to mint. You've inspired me once again to go after the completion of this set, and for that I thank you. Needless to say we no longer have an aquarium.

1973 was the year I started collecting so I am thankful that set was spared, even though the 71's are harder to come by. The 1973 set provides enormous humor with the painted on hats, and backgrounds more fitting for a mob hit than a baseball pic.