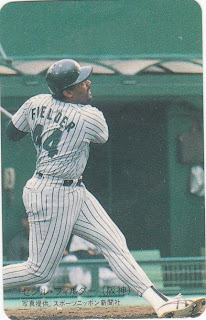 You can take the title of this post anyway you want it. I'm a big boy. I can handle it.

This may or may not be a regular feature. It's just that I'm noticing that there is a lot about cards that I haven't figured out, and that there are a number of other people out there that know a lot more about a variety of card topics than I do. So, why not put that knowledge to my own, personal, selfish use and get a few nagging questions answered? Sound good? OK, let's go.

Here's the question: what kind of card is the one up top? I know it's a card of Cecil Fielder from when he was playing in Japan. I'm assuming it was issued in 1989. That's where my knowledge ends. I won this card as a door prize at a card show a year or two ago. I had my choice of cards and selected this one basically because it was the only baseball card in the bunch. The sleeve it was in bore a $20 price tag, not that that means anything.

This is the back: 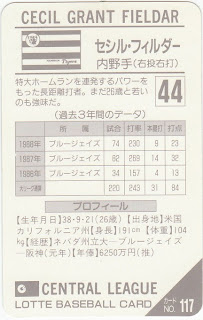 Hmmmm. "Fieldar"? I know there are a couple of blogs that cover Japanese cards. I looked at one briefly but it seemed mostly about Japanese-born players. My question is: was this a Japanese issue set or an American issue set, what year was it issued, was it something issued each year, and were there any other American players in the set? Yup, the classic four-part question. I'm a journalist, what can I say?
(EDIT: The readers always come through. Not only do I now know that this appears to be a 1989 Lotte card, issued in Japan, but I also know a lot more about sumo, Japanese anime, and longtime minor league pitcher -- and former Dodger farmhand -- Lindsay Gulin, than I ever did).

Billy Suter said…
If I had to guess, that card is a 1989 Calbee. Calbee is a major snack food manufacturer in Japan, and they released cards in bags of their potato chips as early as 1973, and they continued until at least 2002. The checklist on OpenChecklist is incomplete, but it lists two other gaijin (foreign-born players) in the set. They are Bill Gullickson and Larry Parrish.

I didn't know any of this stuff before I looked it up. Rob's Japanese Baseball Cards is a good site to find info about Japanese cards. Here's the link:

Anonymous said…
Hey,
Is the Lincecum you pulled look anything like this?

Anonymous said…
It's definitely a Japanese release. I don't know why his name in English is spelled wrong, but it could be an incorrect transliteration of the katakana used for his name.

Fielder played for the Hanshin Tigers (CLAMP's favourite team!...sorry) but the card mentions Lotte. Lotte, while also owning the Marines team, is a big candy and snacks firm. That card you have, if this is correct, is a 1989 Lotte.

(I wish I knew more Japanese; my friend in Oita has no interest in baseball and can't find a card shop. I really want to know if Lindsay Gulin has a card from when he played in Fukuoka.)
November 1, 2008 at 3:50 PM

night owl said…
No, Bailey, I think what you have is the black Lincecum parallel. Mine is more gray or silver. I'll set it aside for you.
November 1, 2008 at 5:16 PM

Joe Martelli Jr. said…
Billy and Oragato are partly right. To be more specific, the card was a redemption. If you sent 50 wrappers of big Cecil's Japanese high sugar Carp flavored candy bar, named the Yokozuna ;)
November 1, 2008 at 8:14 PM