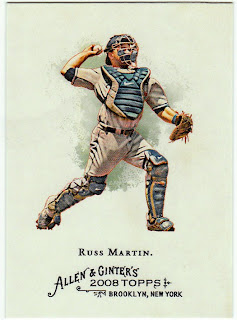 It's time to comment on the results of my recent poll. The results are hardly conclusive, which is appropriate because I'm not sure myself what direction the Dodgers should go in this offseason (let's hope Dodgers management does).

In terms of free agents, Manny Ramirez received the most poll votes as far as who the Dodgers should retain. I can't shed any new light on the millions of words wasted on Manny Ramirez. Yes, he's a fantastic hitter who helped the Dodgers into the playoffs. Yes, he can be a drain on a team if he's not happy. Personally, if the Dodgers can find a way to sign him for two or three years, I'm all for it. L.A. needs a power-hitter and if Manny goes there's not a lot out there on the free agent market (I'm hoping that L.A. finds a way to wrestle Pat Burrell away from the Phillies). But I don't want the Dodgers to be stuck with Manny for 5 or 6 years. That's asking for trouble.

For me, the no-brainer among the Dodgers' free agents is Rafael Furcal. L.A. has GOT to re-sign this guy. He was a force the first part of the season and is still a great fielder. I'd also like to see the Dodgers re-sign Casey Blake, although that doesn't appear like it's going to happen.

The talk that's been around -- that L.A. is going to move Russell Martin to third base and acquire another catcher (possibly Jason Varitek. Gack!) -- concerns me. They say Martin wore down late in the season catching all those games. Well, moving him is a little drastic isn't it? He's still a great catcher. Just have him catch fewer games. He catches too many anyway. Give him a breather a little more often. Start him at third periodically if you can't get him out of the lineup. But don't tinker with a formula that's working. Martin works behind the plate. Keep him there.

I'm happy with Blake DeWitt at second base. I'm done with Jeff Kent. As for the pitching, the Dodgers need to acquire another starter to make up for the loss of Lowe and Penny and Maddux. None of those guys are coming back. And I'd like L.A. to re-sign one or two of the relievers who are free agents. Jonathan Broxton and Takashi Saito, who both had some issues last season, need a little help. Cory Wade can't do it all.

Those are my humble opinions. I believe that covers everything. ... Oh, except one thing: the Dodgers need to continue the natural progression of Andruw Jones: 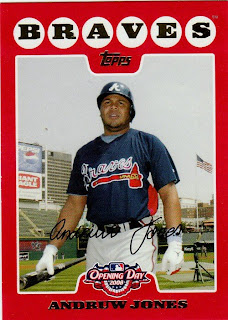 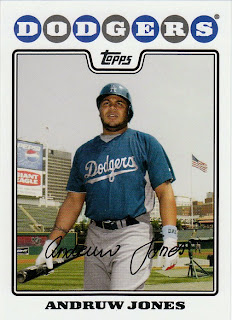 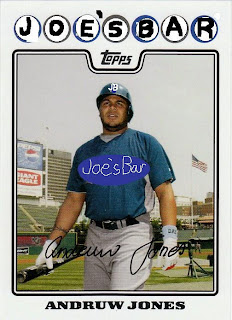 (Sorry, that's the best that I could do for now. I'm not PunkRockPaint).
Make it happen, L.A.

Spiff said…
Some rumors that Texas might try and grab Blake for a year or two at third. Can't say I would mind that. Glad they didn't get Manny way back when, more trouble than he's worth in my book.
November 11, 2008 at 6:30 PM

gcrl said…
i agree about furcal.

Manny won't be back. Ned apparently wants to play hardball with Boras, and we all know how that always turns out. Unless Manny fires Boras and signs with the Dodgers anyway, he's not going to be back.
November 12, 2008 at 10:18 AM