Where ya been, babe?

He's practically completing the set for me with these packages. With this third edition of cards sent my way, I'm down to needing 89 more cards to finish the set. That's pretty good for someone who didn't buy a box of A&G this year.

In fact, I'm just about at the stage where buying another blaster of this stuff is a waste of money. I mean I couldn't even use the cards I get from it for blog material. Nobody wants to see A&G anymore.

So here, real quick, are the cards I got from Chris: 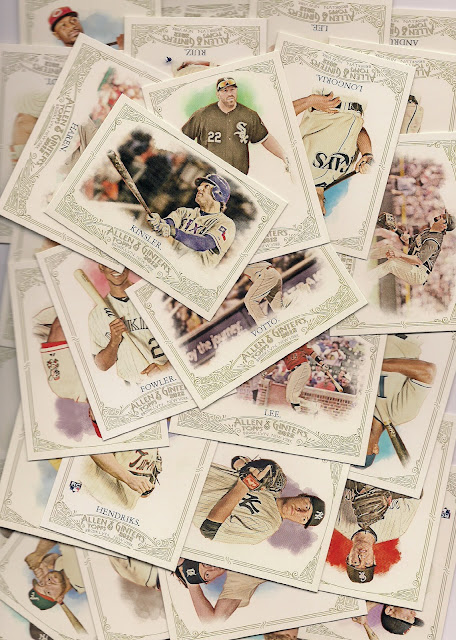 You barely looked at them, didn't you?

Me, too, even when I was opening the package.

Not because I'm ungrateful or anything. In fact, I did a little dance around the back 40 when I learned I could erase more numbers off of my A&G want list. You should have seen the neighbors' faces.

With every card package, I am perpetually grateful.

But this is how I paged through the cards as I opened them: 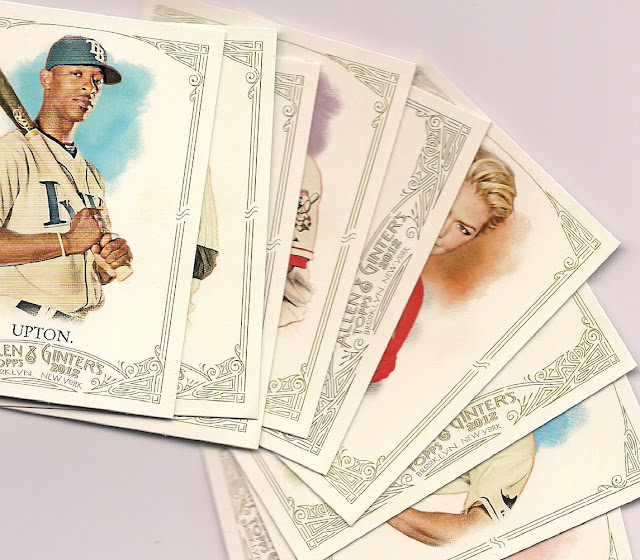 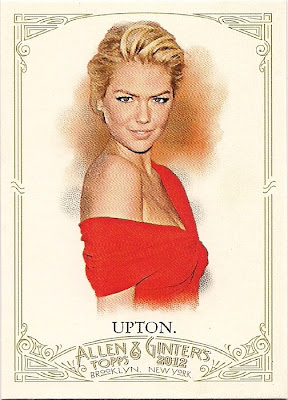 Where ya been, babe?

It's taken me like four blasters, several rack packs, a bunch of loose packs and a handful of trade packages to find this card.

I knew I'd eventually get it, but, damn, it was a hassle waiting. I've got work to do here.

I need to update the Allen & Ginter Babe of the Year list!

So here it is, all updated:

All right, I can hear some complaints in the background. (I always hear complaints -- I've got to learn to find the off switch).

"What about Erin Andrews?" some of you are saying.

I love Erin Andrews. For more reasons than just her looks, which I'll be happy to get into at some point at a later date.

But in a matchup against a runway model/swimsuit model/the best looking woman to grace the cover of Sports Illustrated in years, even Erin cannot compete.

I'll be happy to write in more detail about the reasons why Kate Upton gets named A&G's Babe over Erin Andrews. On that day, I will compare the two in a highly analytical, knock-down drag-out, womano-a-womano, side-to-side, cardboard-to-cardboard throwdown.

Unfortunately, even though I finally have Upton's card, I still need Andrews' card.

Even in cardboard form, hot women avoid me.

Play at the Plate said…
I think that link just got me fired. Not to take anything away from Kate, but I did notice Ian was on the top of that pile. That didn't sound right.
August 22, 2012 at 12:11 AM

Funner Here said…
Inspired by this post, I envision a few things: A "Babes of Allen & Ginter" Calendar; and a March Madness type bracket contest as to which A&G "babe" card takes top seed.
August 22, 2012 at 12:57 AM