August 23, 2012
(Today is the birth date of both Shelley Long and Rick Springfield -- two stars of the '80s. Both are 63 years old. Today is also the day Bobby Bonds died ... nine years ago. All of this makes me feel old, of course. Let's change the subject to Cardboard Appreciation. This is the 158th in a series): 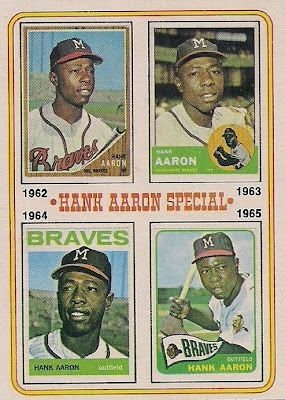 I found out at an early age that I would be no good at promoting myself.

My mother was the kind of parent who thought it important to send her kids out into the neighborhood begging for money in exchange for odd jobs. So, in the middle of some cold, winter's day, we were haggled into putting on our heavy coats, caps, gloves and boots, so we could knock on doors of complete strangers and somehow convince them that we'd do such a smashing job shoveling their walk that they would want to throw their hard-earned money at us.

I was terrible at this.

I think out of the entire time that I was forced to do this, I got maybe three shoveling jobs and one lawn-mowing job. And the mowing job was for someone who knew my mother.

To this day, I have a difficult time hyping myself. I could never be a salesman of any kind and I used to spend teenage nights awake freaked out that my grades might be so bad that I wouldn't go to the college of my choice and I'd have to sell vacuums door-to-door for a living.

Any opportunity to praise myself is a lost opportunity. I've tried to do it a few times on my blog -- referencing a past post, etc. -- and each time I feel terrible that I did it.

It extends to others, as well. Unless the praise comes out of me instinctively -- without thought -- or unless it's connected to some job responsibility, I cannot even promote someone else's activity or achievement. I just can't do it.

I am so grateful I did not find a job in the business world or in advertising.

Topps, of course, is a business. And it's done its share of self-promotion and self-advertising. In fact it's increased over the years.

But I'm most curious about how often it's happened in card form.

I know some of the recent insert sets -- "Cards Your Mother Threw Out" and "Before There Was Topps" are nothing but drawing attention toward either past sets or Topps itself. Then there are sets like All-Time Fan Favorites or Archives, which are really just out-and-out tributes to Topps.

As far as the first time that Topps promoted itself on cardboard? I'm not so sure. 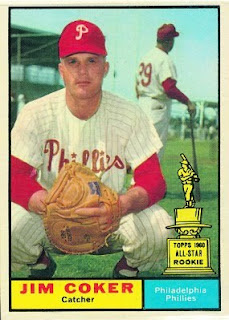 If I had to guess, I'd say it was whenever the Topps rookie trophy first appeared on cards, in 1960 or 1961, when Topps announced the Topps All-Rookie team (the trophy in the '61 set was "engraved" with Topps' name, while the 1960 trophy was not).

After that, I'm going to say it was in the 1974 set when Topps used the second, third, fourth, fifth and sixth cards in the set to feature past Topps cards of Hank Aaron. This was an entirely different concept (I think), featuring images of past cards on a new card.

But the truth is, it was self-promotion. You didn't see any Bowman or Fleer cards of Hank Aaron in those cards. It was all Topps. 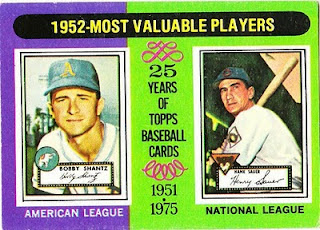 Topps took another step in self-promotion the following year with its "25 of Years of Topps Baseball Cards" insert set, honoring past MVPs.

This was my first year in collecting, so I had no idea what I was looking at as I viewed past cards of Willie Mays and Bobby Shantz and Ernie Banks. Later, I thought it was pretty cool and didn't really think of the self-promotion angle. In 1982, Kmart came out with a set of cards in conjunction with Topps, which featured almost nothing but past Topps cards of previous MVPs. Then, in the 1986 set, Topps did a card retrospective of Pete Rose, as it did with Hank Aaron. 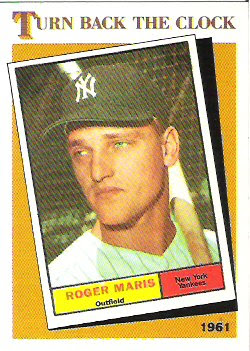 This was also the time when the Turn Back the Clock series featured previous Topps cards, instead of just photos of the players like in the 1977 TBTC insert series. 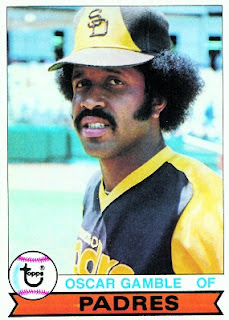 In 1979, Topps put its logo on the front of every one of its player cards for the first time. Then, it put its name out front again in 1981. Since then, the Topps logo has never really left the front of its cards. Self-promotion and branding is now a full-time, all-the-time job. Even as the only company left that produces MLB-licensed cards.

Relentless self-promotion is a way of life today, from tattoos to touchdown dances to tweeting. It may be derided as crass or exploitative or even unprofessional. But in business and advertising, anyway, it's all about the bottom line. 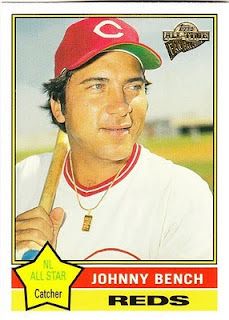 And if that means another appearance of something like All-Time Fan Favorites, I can live with that.

Why, if I like the set a lot -- meaning you put it on good, old-fashioned cardboard -- I'll even promote it on this here blog.

Just don't make me go door-to-door to talk about it.