August 27, 2012
I just dropped the scanner lid on my fingernail. The lid is thicker and heavier than it has any need to be, and one the many visible signs that my scanner was created by baboons. At any rate, my finger hurts and I'm trying to type without it, but it's not going very well. So let's see how long this lasts ...

I'm very excited about my next post -- that's right, the post after this one. Sorry you're not reading my best effort this time around. But just to lead into that exciting post, I'm showing you some minis I've received lately.

The most recent card packages I've received have been mini-heavy and they're about to consume the card desk, so I've got to get them out of the way.

Here are some sent to me from a mini-exclusive package by Brian at Play At The Plate: 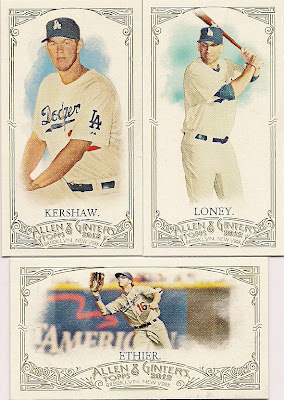 The most excellent Clayton Kershaw and Andre Ethier and the departed James Loney.

The Kershaw will be going toward the new frankenset quest because I received a pair of Kershaw minis in back-to-back packages.

But PATP also sent a couple of minis just for the Frankenset binder. 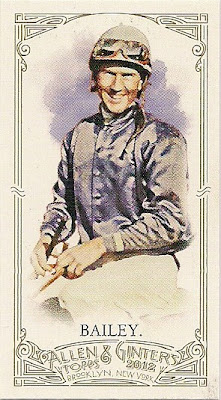 This is the only one that made it into the binder. Yeah, a jockey. I'm not happy about it either. That's why you need to send me more minis. I need this thing respectable.

The other card Brian sent was one of the Harlem Globetrotters. I forget which one. I was shocked when it didn't make the binder -- and promptly shipped it off for someone else's frankenset. A Globetrotter needs to be in a frankenset binder somewhere! 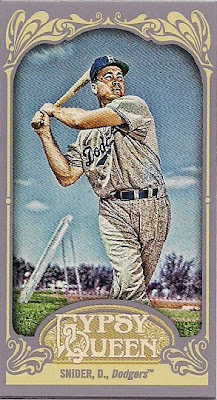 This mini is from madding at Cards on Cards. This is part of -- if I believe my blog -- the 23rd package I've received from him. Wild ain't it?

Not as wild as the back of the Snider card. 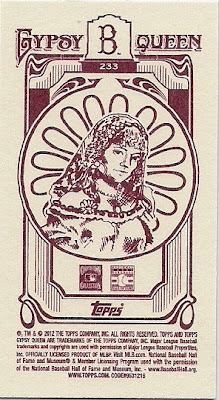 It's one of them red gypsies!

Yeah, I know. Nobody cares. Me either. Except my brain. Which. Must. Categorize.

I do care about this: 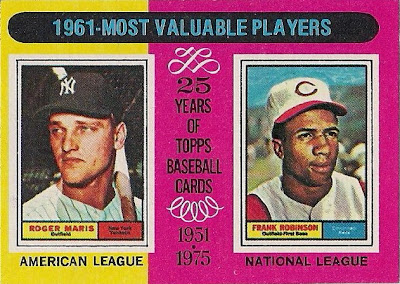 This is card #199 in the set. I know this without turning it over. I have two-thirds of the set memorized by number.

I also have this card already, but it hails from the early portion of my collecting career and has a major crease down the center of the card. Maris and Robinson deserve better. Especially Robinson. 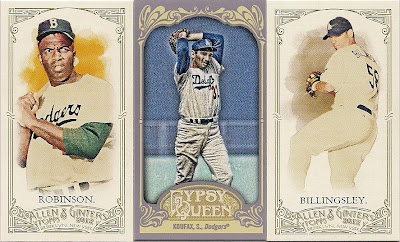 Look at these characters.

They're from arpsmith. I now have two different versions of Billingsley's mini, but have yet to pull his base card. Shuckins.

Arpsmith also sent me a nice stack of regular-sized A&G cards for the 2012 completion quest. He thought he was being clever by sending me a beetlejuice Giant because he said it was on my want list.

Joke's on him. Someone -- a non-Giant fan -- sent me the card before he did and I just hadn't crossed the pumpkin-garbed goof off the list yet.

But just to be nice, I'll show a couple of base cards from Adam. 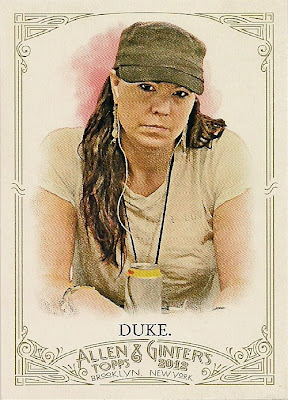 I am really curious as to what beverage Annie Duke is drinking there. Her drink cozy is covering it up. I'm hoping it's MelloYello. 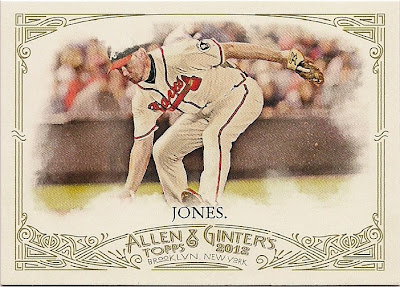 Presenting one of the Worst Cards of the Year.

Once again, I'm not sure if I'll be doing an end of the year "Worst" post this year -- if I do, I better start buying some Goodwin Champions junk before it's pulled for awfulness.

But this card is right up there. What would happen if Chipper played with one hand, half a foot and part of his head missing? I've always wondered that. Now I don't have to.

OK, the finger is throbbing now, so I'll end this.

Thanks for the minis, guys.

They're the happiest cards ever.

Play at the Plate said…
Sorry to hear about the finger. I'll hook you up with some better Frankenset minis in the next package I send you. I forgot they have to beat out other minis.
August 27, 2012 at 3:03 AM

Zayden said…
I must say I lol'd when I started reading your post. Not in being rude in laughing at your finger incident(okay maybe just a little) but mostly about the "scanner being created by baboons" part. I'm starting to wonder if baboons could design better tech devices than the chimps that are doing it now.

When I drop my scanner lid, it's not heavy but it ends up scuffing the cards a little. And I would rather hurt my finger than damage a card, sad as it is to say.

JediJeff said…
I guess Coke didn't pay the Topps gods like Nike and Bank Of America did: