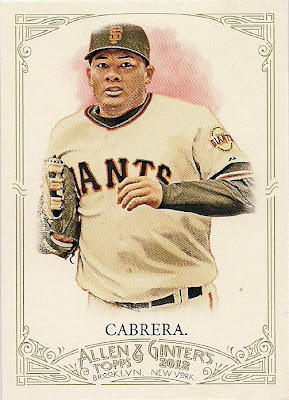 You probably think I am ecstatic over the news that Melky Cabrera has been caught using PEDs and is now suspended for 50 games.

You're right. I am ecstatic. What could be more wonderful than a too-good-to-be-true player on my least favorite team being exposed for the lazy-ass that he is in the midst of a pennant race also involving my favorite team? Oh, and did I mention that he used to be a member of my runner-up least favorite team?

I am also disgusted.

I've been through this before, so I apologize if I'm repeating myself. It's just that news like this makes me sick.

It doesn't have to do with "cheating" or the "integrity of the game" or money, or anything like that. Or maybe it does a little. But I know that no one can prove that PEDs affect performance the way they're insinuating that it did for Cabrera.

The part that makes me ill is the reaction. The "yup, I KNEW he was doing something. Nobody improves like that without using."

Well, thank you Mr. Expert. How come you're not a member of our U.S. defense department with your perfect powers of all-knowing and all-seeing?

It's the automatic cynicism that erupts after an announcement like this that is so irritating. The cynical analysis of Cabrera's career. The "something was fishy" tone of voice. The excuse to artificially inflate one's sense of self by basking in the glow of someone's career burning in flames.

Yes, Melky is an idiot. Yes, Melky was lazy and fat when he played with the Yankees and Braves. Yes, Melky, according to a wonderful line by Keith Hernandez, is "a 4 on Strat-o-Matic, defensively."

And, yes, Melky will make us think twice -- again -- when some other player enjoys a sudden, surprising upswing in his career.

"Is he a fake?" people will wonder. "Of course, he's a fake," people who get off on being superior will reply.

Cynicism is rampant in our society. And this is the part I don't like.

Being a cynic is a good thing in many ways. It works very well in my job. It prevents you from getting bamboozled. It keeps you informed and knowledgeable.

But rampant cynicism? It makes me sad. 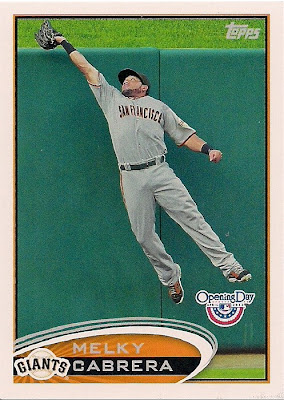 Here is fake Melky wearing a fake photoshopped uniform. Nothing is real about this card. I don't even think Melky has caught the ball or is even leaping. Topps probably photoshopped out a box underneath his feet.

Every time a new set comes out, we have to figure out which cards were photoshopped. Which photos are "real" and which ones are not.

That's what Topps has created in us. A bunch of cynics. Or maybe it's today's cynical world, because back in '73 when Topps was airbrushing uniforms, nobody cared.

But there's been a whole lot of tinkering since 1973.

And tinkering with reality has made us this way.

If you see an obviously well-endowed woman, what are the chances your girlfriend will say "those are fake?"

Could your girlfriend say that in the '70s? Nope. But today, the automatic assumption is the gal has had some work done.

Today you've got people yelling at the movie screen, "that is SO fake. That's graphics. That's not real." A number of years ago, I actually had someone question me when I said my Christmas tree was real because it looked too good to her to be real. (Full disclosure, all of my Christmas trees are now fake).

Fake photos. Fake flowers. Fake food. Fake hair. Fake grass. They may have their purposes, but behind many artificially enhanced objects or people, there is a cynic ready to pounce.

I try very hard to enjoy baseball for what it is, and enjoy the players for what they are. An exceptional game with exceptional talents. I try to avoid fan forums and internet comments and talk radio and morning show babbling and all that honest-to-goodness shit, because it's a breeding ground for cynics and trolls and people who need to inflate their egos because they hate their life.

(And what Ryan Braun did? That spawned cynics like maggots in three-week-old garbage. At least Cabrera confessed).

This is now the point (or maybe people were screaming this at their computer screen about 10 paragraphs ago) when someone will say, "if they did REAL, OUT-OF-SEASON, RANDOM, BLOOD TESTS ON EVERYONE, then we wouldn't have so many doubts!"

But I don't know if I like that either. 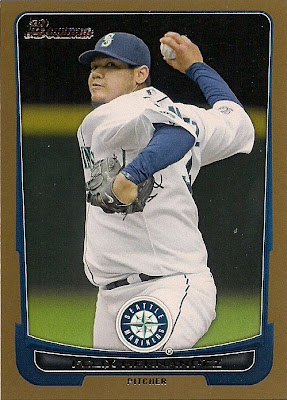 On the same day baseball fell to its lowest low, it rebounded to its highest high. Felix Hernandez pitched a perfect game.

I wonder if there was a cynic out there that thought, "he has to be on PEDs."

Someday, that may be everyone's reaction to any standout performance by anyone. Or maybe someday our automatic reaction to anything that isn't mediocre will be "show us the blood test." It will be the only way we will give ourselves permission to be happy for someone.

Either reaction is ugly.

And I guess that would be our fault.

Or maybe it's their fault.

I just know I won't like anything about it.

Spankee said…
Sometimes I think of something and want to write about it. Then I read your blog and realize you already wrote it.
August 16, 2012 at 9:41 AM

The Angels In Order said…
What has been will be again,
what has been done will be done again;
there is nothing new under the sun.

gcrl said…
Not sure if I should go with the Elaine (from seinfeld) or radiohead reference here.

As in, "fake fake, fake fake" or "fake plastic trees".

Anonymous said…
I just don't understand why the strong reaction only happens in baseball. Yesterday on the world-wide leader and on talk shows (yes I listen to them, maybe against my better judgment) I heard a lot of "will baseball ever get through this" and lamenting that "god, I thought we were past this".

Baseball's my favorite sport, and I just don't think it's fair that it gets that rap. It's like the whipping boy. Where is the same outcry in the NFL when Philip Buchanon got a PED suspension for 1/4 of the season last year? What about the 7 or so Olympians who tested positive during the games? Did anyone question if the NFL or the Summer Games could "get through this"?

Laurens said…
I'm one of the guys who railed on Braun because he's been one of the beloved guys in the sport who everyone liked to slobber over.

The fact he sorta beat his PED suspension on a technicality seals the deal as far as a 'golden boy' getting off.

I feel disappointed, a little more sorry about Melky since whatever he did, he wasn't the people's choice, he wasn't a guy people liked in the first place.