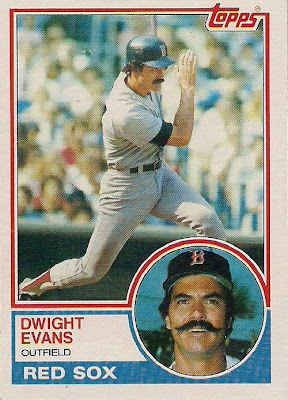 Continuing once again with subjectively ranking the baseball sets of each year since 1981, I've arrived upon the year that may be the biggest blowout out of all of the 30-plus posts I plan to do in this series.

I have not come across anyone who doesn't love 1983 Topps. However, if there is someone out there who does not enjoy it, I'm sure this post will unearth that wacky soul. I seem to have a talent for getting people to admit all kinds of weird things in the comments.

But for everyone else, it is apparent that Topps decided it had had enough. Enough playing around with these two pretend card companies, Fleer and Donruss. Enough stooping to their level. Enough looking over its shoulder. It was time to grind them into dust.

And so, leaning heavily on its long tradition, Topps came up with a card set that is probably the most beloved of all of the 1980s. Outside of a fantastic design, Topps didn't change much, but it was enough to reign supreme. And it officially sealed my commitment to Topps. Unlike the previous two years, I barely tried to collect any Fleer or Donruss.

But for the sake of official-dome, I have to pretend that I don't know which company is going to come out on top and do all the necessary and scientific reviews. So join in, won't you? 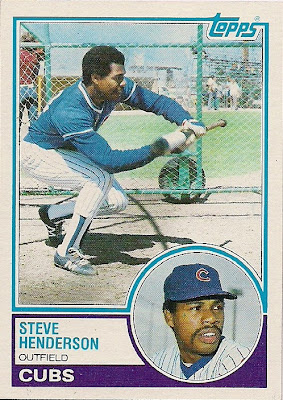 Plusses: A design that remakes the 1963 Topps design. But like all memorable remakes, it improves on it vastly. ... TWO photos of the cardboard subject. ... One action shot and one portrait shot is genius ... The border colors come closer to matching the team colors, although it's not a perfect match for most teams. ... The arrival of the Super Veteran subset, which gave collectors some great old-school photos of longtime current players.

Minuses: Not many. The border colors are off for a lot of teams. Green with the Dodgers. Purple with the Cardinals. Yellow with the Reds, etc. ... A second straight year of separate All-Star cards, rather than noting the player's all-star selection on his base card. Plusses: Well, Topps didn't use green again, at least. Orange makes an appearance for the first time since 1978. ... The silhouette ballplayers are kind of nice.

Minuses: A typical boring back of the 1980s. ... The 1982 Highlights is in timeline format, which is good. But the facts are pretty dry. Straight highlights. ... Collectors don't even get the '82 Highlights if a player's career is too long. ... No position designation on the back.

Plusses: Once again, tradition and good old cardboard. ... A large 792-card set again. ... Realization that with a base set filled with action shots, it didn't need the "In Action" subset for a second straight year. ... A very colorful and action-oriented set with a memorable design. ... Wade Boggs, Tony Gwynn and Ryne Sandberg rookies (with Darryl Strawberry in the traded set). 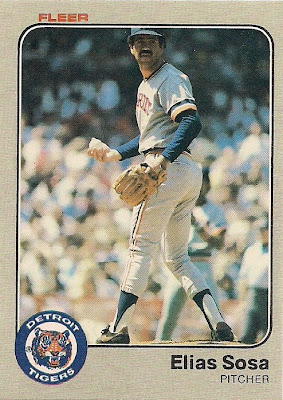 Plusses: The team logo moves from the back of the card (1982 Fleer) to the front, which was a big hit with collectors. ... The card photos are a lot less blurry than in '82 Fleer. ... Fleer seemed to really embrace its ability to take "different" photos of players in this set.

Minuses: Hoo-boy, gray borders. I sure do hate them (or maybe they're beige. Still boring).  ... More odd photos, like this one. Get Sosa's cap in the photo, sirs. 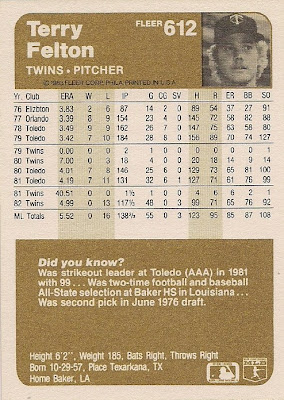 Plusses: A photo on the back! This sure was different in 1983. Unfortunately it was the same picture that was on the front. ... The "Did you know?" facts were kind of neat.

Minuses: Not a fan of vertical backs, for the most part. ... Fleer switched to this format for 1983 and stayed with it for almost the rest the decade, only changing up the bottom. Apparently, it liked what Donruss was doing. But I never liked the sameness of all the backs in the '80s.

Plusses: The first official SuperStar Specials. ... The colored team logo on the front is really the star of the whole set. ... some different pictures that are worth a look even after all these years. ... Rookie cards of Boggs, Gwynn and Sandberg. ... Fewer errors than in the previous two years.

Minuses: If you don't want me to collect your set, make your borders gray. ... Humdrum back that would be repeated over and over in coming years. ... A set that made this collector almost lose interest in anything that wasn't Topps. 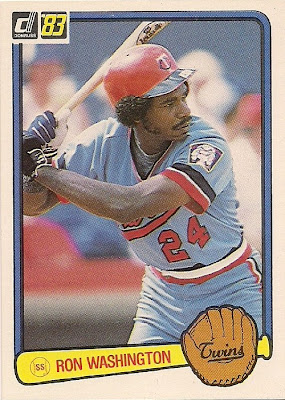 Plusses: Well, if I'm comparing the very few differences between '82 and '83 Donruss, I have to say I like the rounded corners better.

Minuses: Here comes the hammer: Donruss basically reissued its 1982 set in 1983. It was an insult to collectors and it should have lost its ability to produce baseball cards for the next five years (which wouldn't have been a bad idea given some of the future Donruss sets). ... I was appalled when I bought a pack of these and saw what they looked like. I think I bought 2 more packs the entire year. ... The script team name on the glove doesn't stand out enough. ... The Diamond King series (which I never liked) wasn't as nice as it was in the 1982 set. 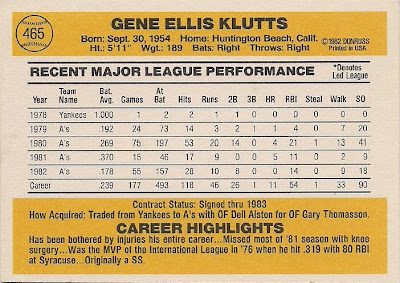 Plusses: Donruss broke out the contract status/how acquired information from the career highlights to display the info better. ... I haven't mentioned this yet: the full name of the player is always fun. And Donruss became known for this.

Minuses: A virtual repeat of the 1982 back, which didn't deserve repeating. Once again, five years of stats is not enough. ... The switch from a blue back to yellow is not good.

Plusses: Zip ... Oh, all right, Donruss had the Boggs, Gywnn and Sandberg rookies, too.

Minuses: Shame on you Donruss for not trying.

(The "Best of the Year" Series is now linked on the sidebar).

Anonymous said…
'83 Topps is my short list for favorite of all-time. I don't have any problems with '83 Donruss and Fleer, but neither is any thing to get excited about. At least Donruss is lot nicer than the previous effort, I much prefer the glove to the ball and yellow back to the blue one.

runfore!kelloggs baseball cards said…
Hard not to like Donruss and Fleer since they were available for $3 per box at the 1984 National. As a youngster without much funding, I could still buy a lot of cards.

Fuji said…
What a great year for baseball cards. 1983 Topps was my favorite set for many, many years. 1956 has since taken its place, but the 83 set is still awesome.

It's hard to argue with your rankings: