August 16, 2012
(Today, vacation season is officially over. I return to toiling until the holiday season at the end of the year. Is this why people follow college football? To forget the drudgery of September to November? I think that's what it is. But now something more fun than toiling or college football. Time for Cardboard Appreciation. It's the 157th in a series): 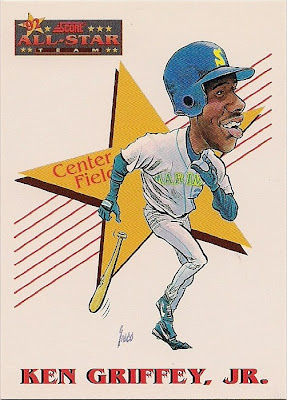 Every August, money is tight. I just had a discussion with my wife about how we were going to pay the bills for the week. I have this discussion every August. It's a hoot each and every time.

This current state of affairs automatically eliminates card purchasing from my to-do list. ... Well, I wouldn't say "automatically." There is some numbers-crunching and book-cooking and paper-shredding in an effort to find a way to buy a pack of cards.

But even after all of that, there is just no way this week.

Not even a buck to spare.

That's too bad, because if I could buy a pack, it would be of Panini's new Triple Play series, which happens to cost just a dollar.

Yeah, I know. I just wished for a Panini product. What's become of me?

But I've always had a thing for cartoons. As you know, Triple Play features cartoon likenesses of present-day players. And that looks pretty cool.

Art cards usually don't do a lot for me. You've read me bagging on Topps' recent sketch cards and my longtime dismissal of Dick Perez Diamond King cards. And that's mostly because I don't go for realistic type art -- not on baseball cards anyway. Attempts at realistic paintings will always fall short in comparison with photography. It just doesn't look as good.

But cartoons? Caricatures like those in the 1993 Score All-Star Team subset? I love that stuff.

As a kid, I would religiously follow the newspaper comic strips (what you older people call "the funnies"). But I would stick with the lighthearted offering. Peanuts, Garfield, Hagar the Horrible, etc. The only slightly serious strip for which I made an exception was Doonsbury. Because the people looked funny.

But the realistic strips? I avoided those like broccoli was going to suddenly shoot out of the cartoon and into my mouth. My brother would talk avidly about Prince Valiant, and I'd look at him like he'd inhaled too much newspaper ink.

Serial strips were bummers. Prince Valiant, the Amazing Spiderman, Mary Worth, the Phantom. All ignored by me. I didn't want to read about serious issues when I was looking at the comics. What's Beetle Bailey up to?

Later, my tastes expanded into satire. Calvin and Hobbes. Bloom County. I even read Gil Thorpe, because at least it was about sports (but, geez, did the teenagers have to keep getting pregnant?)

But my heart remains with wacky.

Give me exaggerated ears and a serious case of cartoon gigantism. I'm laughing before I even read it.

The Triple Play cards may not be quite that exaggerated. But they're still fun. 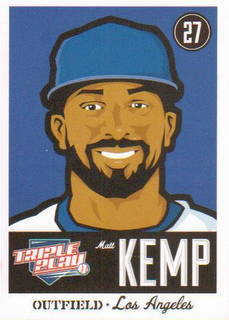 Anybody got a buck?

GCA said…
I have the same problem this August, but it was caused by card buying. A little party called the National. Really got out of control at the ATM, so until my most recent paycheck, I was sweatin' it.
I did get a Dick Perez autograph, though.
August 17, 2012 at 7:54 AM