August 01, 2012
(Welcome to the month when summer dies. I know that I should appreciate August more than I do. Unfortunately, the spectre of school has been killing this month since I was 5 years old. Down with school! Up with cards! Time for Cardboard Appreciation. This is the 156th in a series): 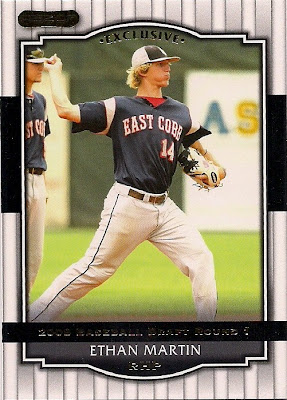 The only reason I tolerated this card in my collection -- a card of a high school athlete in his baseball academy uniform -- is because he was a Dodger prospect.

Martin had made it all the way to Double A in the Dodger chain. But outside of this card, I have only one other card of Martin (fortunately he's wearing Dodger blue). So this card, which I received from someone else in a trade, remained in my collection.

But now Martin has been traded to the Phillies in the Shane Victorino deal. While I still hang on to my Josh Lindblom cards (also now a Phillie) and Leon Landry cards (now a Mariner), I do so only because they are undoubtedly Dodgers on their cards. And I must remember that history. Even as I vigorously root for them to fail when they play my team as a member of the enemy.

But this Martin card? Why do I need to hang on to this?

This is where you can't be both. You can't be a team collector and a prospect collector. That's because there are prospect cards like this that have zero meaning when your team trades away the prospect. The only evidence I have on this card of Martin being attached to the Dodgers is a line on the back that says "Organization - Los Angeles - N" (Goodness, you've got to love Razor).

Therefore, this card is no longer of use to me.

There are other cards of players who are no longer prospects or even players, in which they're wearing college uniforms, or whatever, and have a Dodgers listing on the back. I have long ago jettisoned them from my collection. They never made it to the Dodgers, they never donned Dodger blue for a card photographer. Be gone!

And so it is with Ethan Martin.

He is banished to the "here are some other cards" box.

Unless a Phillies fan wants a card of a young boy in his baseball academy uniform. Then they can have him.

I hear this Martin guy could be good.

Commishbob said…
Yup, the WORST day of the year is the day I wander into Target and see the Back To School displays of pencil boxes, binders and protractors. I die just a little every time.
August 1, 2012 at 8:55 PM