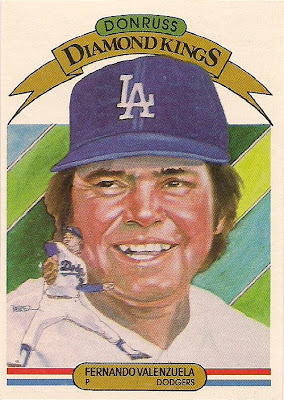 Fernando Valenzuela has been added to the "Dodgers I Collect" page. He is the 10th player I've listed on the page and I can't think of a finer candidate to launch my pseudo-player collection into double digits.

I had intended for Valenzuela to be the next player added for a long time, but I needed a kick in the booty to actually look up my Fernando cards and make a list. That kick was viewing ESPN's documentary on Fernandomania for the first time the other day. (I know the documentary is two years old, but that's what happens when TV shows are aired when I'm working).

The film was pretty good. Not great. I find ESPN's attempts at films lacking and sometimes even amateurish.  But it did a good job of underlining one aspect of Valenzuela that I always enjoyed.

He seemed to come from another planet.

I don't just mean Mexico. I mean another planet in the solar system. He was that different.

People of my generation know what I mean. The phenomenon was insane. I know that a lot of the energy came from Mexican-American fans and the Latino community in Los Angeles and they deserve all the credit.

But I was a white East Coast teenager in 1981, and I was as captivated as anyone about Fernando. 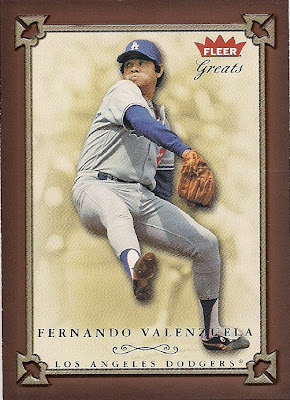 The first rookie sensations I ever knew were Fred Lynn and Jim Rice on the 1975 Boston Red Sox.

After that, it was Mark Fidrych on the '76 Tigers. Then it was Eddie Murray in Baltimore. Andre Dawson in Montreal. Bob Horner in Atlanta. Joe Charbonneau in Cleveland.

Sure, the Dodgers had Sutcliffe and Howe, both Rookies of the Year. But you didn't hear talk about them on the East Coast. It wasn't until Fernandomania hit that someone like me -- 3,000 miles away -- could read about, watch and breathe the FEVER. 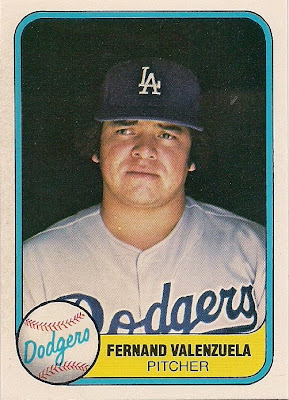 This is the card that I equate most with Fernando and Fernandomania.

You saw that look on Valenzuela's face a lot in 1981. You can read plenty into that face because it doesn't give away anything. Valenzuela was a mystery. He didn't speak English. He was reserved. He was humble. Yet, he wasn't intimidated, and went out there and won eight straight games as if these guys he was pitching against were just local yokels back in Navajoa, Mexico. 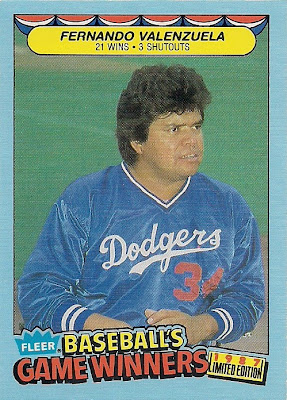 Valenzuela had a lot of ups and downs with the Dodgers and during his career Yet, I'm sure there were a lot of people back in 1981 that thought he was a one-year sensation who would eventually go back to Mexico and play there for the rest of his career.

He was full of surprises.

After his Cy Young year in 1981 as a rookie, he held out before the 1982 season and got himself nearly a million dollar raise. Who knew he had it in him? All they saw was this blank face staring back at them.

Today, Valenzuela is a popular broadcaster in L.A. I've written before about how there aren't a lot of current cards of him, and it's probably because he charges too much for card companies to sign him.

So, collecting his cards should be relatively easy. Although it'd be nice to have some snazzy autograph cards, I already have a pretty nice one. And knowing that there's a somewhat finite number of cards to chase makes it a lot preferable to trying to flag down cards of current players.

Fernando's cards evoke a time when I still thought everything was possible. He confirmed it for me.

I also saw a little bit of myself in him. Someone that people regarded lightly at first and then were surprised later by what the person could achieve. I've encountered that attitude all my life, from teachers to bosses to peers.

So, here's to showing the know-it-alls how it's done.

And here's to collecting his relatively manageable number of cards (no, I still don't expect to get all of them). 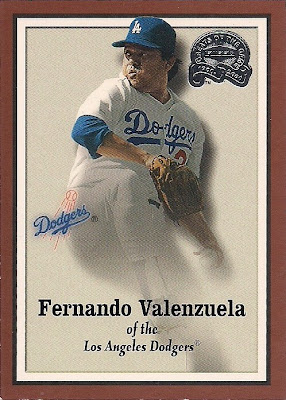 Welcome to the club, El Toro.

Commishbob said…
Great post N.O. EVen my in-laws, who knew nothing about any sports, much less baseball, we're caught up in Fernandomania. It was just insane.
August 4, 2012 at 11:52 PM