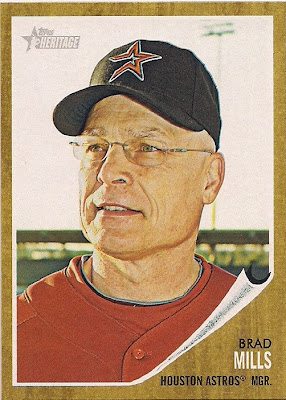 The Astros' manager was fired late last night. Did you know? Do you care?

I know that when it popped up on the news wire at 12:15 a.m. last night that I cared because it meant that I had to redo a page in the sports section of the newspaper. But it was the first time that I had thought about Brad Mills since probably the day he was hired as Houston's manager.

(One of those reasons might be because Topps stopped including managers in its base set after 2009).

The Astros just don't get a lot of attention from the general baseball public and get jerked around by Major League Baseball because nobody is paying attention. (Let's see MLB try to move the Cubs or the Cardinals to the American League West). If major league baseball operated like English Premier League soccer, the Astros would be easy relegation candidates.

It makes me a little sad, because I remember when the Astros were not only worth noticing, but a significant force in baseball. I'm not talking about the 2005 Astros, although it's probably the most successful version of the team. I'm talking about the '80s Astros. The 1980 team of Cedeno, Ryan and Niekro. The 1986 team of Davis, Cruz and Scott. The team that contended virtually every year from 1979-1987.

Those were the old orange rainbow Astros. The teams the current Astros pay tribute to every once in awhile when they trot out those wacky retro uniforms. 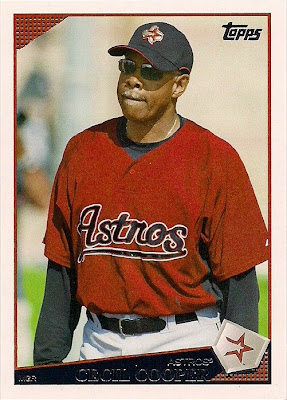 Today, the Astros wear some sort of red rust color, which was just one of the colors included in the Astros' old rainbow uniforms. The team calls the color "brick," not to be confused with the Diamondbacks' "sedona red." But I'd like them more if their main color was still "orange rainbow" ... and if they were staying in the National League.

With that in mind, it's time to look at which color Topps used the most with Astros cards through the years. Houston has changed its uniforms a lot since it came to be in the early '60s. So this should be interesting. ... to me anyway.

Once again, here are the colors used with the Astros for the years in which Topps chose colors based on the team featured:

What Topps says are the Astros' team colors: Orange.

Good ol' Topps still thinks of the Astros in orange terms, too. 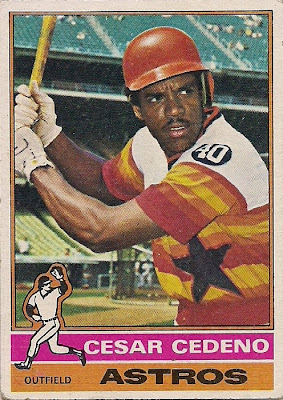 And Cesar Cedeno want to know what you've done with his team.

The Dimwit said…
Great article. Next year we are getting new uniforms and a promise that it will incorporate historical coloring. Really hoping for some bright orange! We may be losing the hill I center field as well!
August 19, 2012 at 8:08 PM

I've already spouted off on the Brad Mills firing over at Dimwit's blog. I'm not surprised by it but it just doesn't seem fair to strip a team down and then can the manager.
August 19, 2012 at 9:31 PM

runfore!kelloggs baseball cards said…
Great shot of the 1970s uniform with Cedeno. Let's get them back.

Selig is looking out more for "his" NL Brewers than the league. Move them back to the AL.

Jim from Downingtown said…
Mills was Clueless Ed Wade's "guy", a crony from his hapless (pre-2006) Phillies days. Wade's gone... why NOT rid themselves of a Wade disciple?