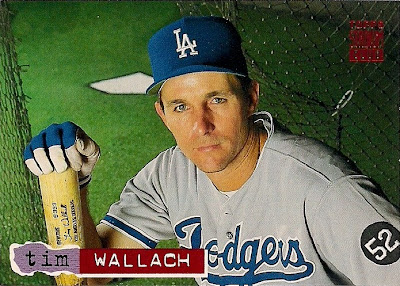 Back in the early stages of this blog, I wrote about the concept of a player not being able to take a bad baseball card picture. They're photogenic, but on cardboard. They're "cardogenic."

Some players just have a knack for appearing on excellent baseball cards every single time. No awkward portraits. No strange expressions. No weird action shots. My favorite in this area was Russell Martin -- before his Yankeefication, of course (his cards have taken a downturn that corresponds with his batting average) -- particularly his 2008 cards.

But I've mentioned other players who have this ability as well. Hideo Nomo has gobs of fantastic cards. Just about every card he graces is a work of art.

I'll even grudgingly admit that Eric Young Jr. can light up a baseball card every time. He's never been a Dodger -- like his papa was -- but he somehow acquired skills in the cardogenic category anyway. Good genes, I guess.

But before these guys, there were others blessed with such a talent.

I haven't really investigated it fully. I'm going by "feel" here. For example, I'm pretty sure Bake McBride has never appeared on a lousy baseball card. I'll have to do the research to be certain, but I'm relatively secure calling Bake a cardogenic pioneer.

I'm sure there are other '70s and '80s guys, too, and I'll have to investigate this further in a future post.

But one player's cards that seem to fall into this category -- I've always liked this guy's cards -- is Tim Wallach.

He's got a lot of appealing cards. And I can't think of one of his cards that I don't like.

But I'm not the expert, nor the Dodger third base coach's biggest fan. That honor might have to go to Cory of Classon Ave.

One of his collecting goals is to acquire every Tim Wallach card. Not just one Wallach card from every set ever made. He wants Every Wallach Card. If there were 4,588,647,871 versions of the 1989 Donruss Tim Wallach card made, then he wants every single one of them. It's right there in his other blog's banner, for reals.

I don't know how he's going to do this, as I'm not going to give up certain Dodger Wallach cards that I have, especially the ones part of complete sets. And I'm just one collector.

But I do have a stack of Wallachs ready to send him this week.

And I'm pretty sure he will agree that Wallach can not make a bad card.

(Or maybe because he's seen so many Wallach cards then he's unearthed the one in which Wallach's eyes are closed when the photographer clicked the shot).

At any rate, Cory recently sent me three cards that were once on my Nebulous 9 list.

They're all greatly welcome in my collection. 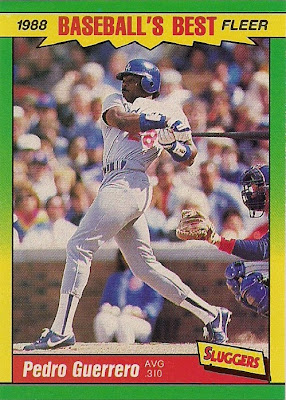 I'd like to say Guerrero never took a bad baseball card photo, but there are a couple out there in which Pete does not look his best ... at all. 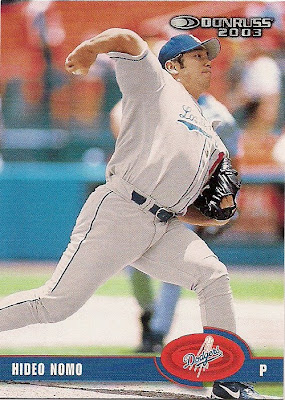 Speaking of the Tornado, here he is!!! This is one of Nomo's rather mundane cards, far from his best ones. But you can't say it's a bad card. Hideo just exudes excellence on cardboard. 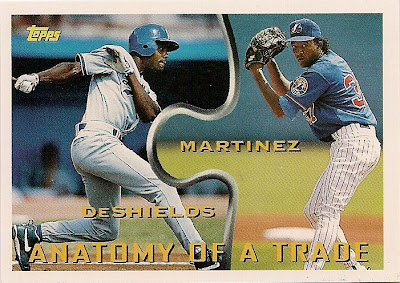 And, finally, the 1994 Topps Traded card of the worst trade in Dodger history.

Yes, I actually had this card on my want list.

This is like my version of what some women do where they watch a sad movie because they "want to cry."

There. I feel better already.

So, my thanks to Cory for allowing me to vent and for these three cards.

None of them look as good as the Tim Wallach card on the top of the post (after all, the card was once in my blog header).

Some players just have it, and some don't.

Deshields, for example, definitely did not have it. 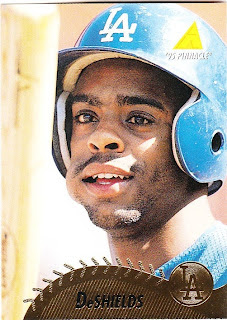 Anonymous said…
This Wallach card has alway's bugged me. It looks like he's wearing braces, and I don't think he is.