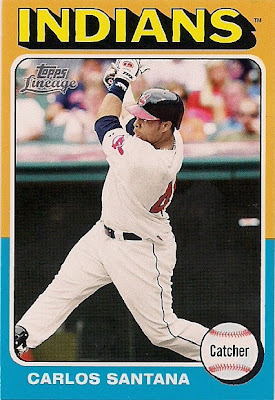 Slightly more than a year ago, we were coming to grips with an odd little Topps offering called "Lineage." It featured a rather boring base set with the most pointless card backs since Upper Deck dared put out a baseball product.

But the inserts were nostalgic and fun and basically the whole excuse for the set.

I was caught up in Lineage Fever last summer and decided to pursue just one of the insert sets -- the tribute to my first year of collecting -- the Lineage '75 minis set. The set is 200 cards large and I thought it was ridiculous of me to chase an insert set that large. It was something I had never done in all my years of collecting.

Well since that time, Topps has moved on, and everyone else has moved on. Lineage has basically become Archives, a set that left me cold. But I stayed firmly entrenched, pursuing those tiny, colorful Lineage parallels to the bitter end.

Slightly less than a year after I announced my wild-and-crazy quest, I am very close to finishing this feat.

If you've been to my Lineage minis want list very recently, you may have noticed that it is down to five cards. That's right, just five. The 2011 me can hardly believe it.

After a bit of a delay, I recently received the last of my birthday haul cards. Here are the minis from that haul: 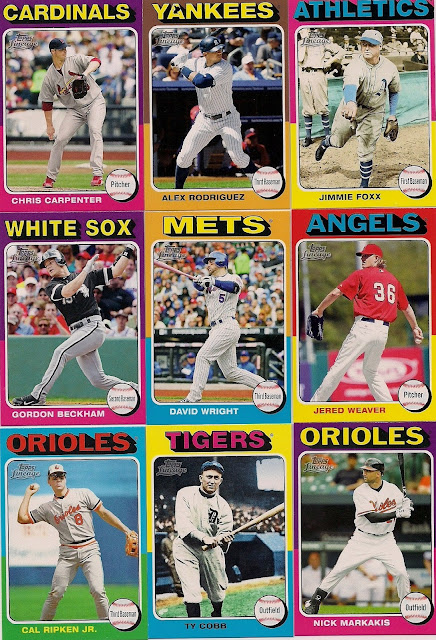 I apologize for the crookedness. This is the scan in which I dropped the scanner lid on my finger. My lining-up skills were useless after that. 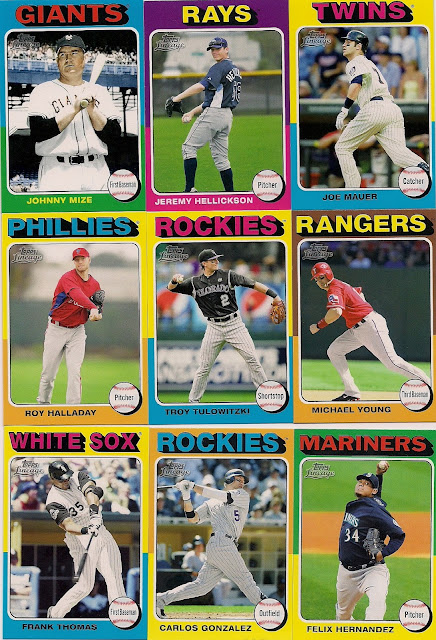 See? That bottom row is not straight at all. 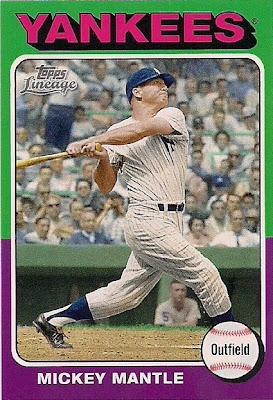 And Mantle by himself, because he thinks he's special. And I had to pay more for this card than any of the others, which is annoying.

But with these fantastic, colorful minis, I know exactly which mini cards I need to complete the set.

I've already tracked down those five minis online and they're cued up and ready to go for whenever I actually have money to purchase them.

But if anybody has any of those five cards, I wouldn't mind trading for them to save me a few cents.

Of course, when I obtain those five cards, I'll have to do the ritualistic collectors' double-check maneuver and probably realize my want list didn't account for a couple of cards.

But I'll deal with that horror later.

Right now, they're not stored. They're just stacked on a desk. But my original '75 minis are floating around in regular 9 pockets.