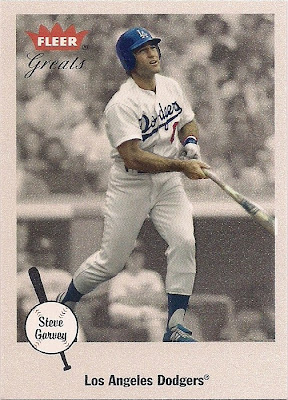 I am not one of those people who receives a gift card for his birthday and then six months later discovers "Whoops! (hee. hee). Here's that 50 dollars I forgot all about!"

Seriously, the year is jam-packed with days in which I can not afford to buy an 85-cent bag of Doritos in the vending machine. So the potential arrival of birthday money is charted, plotted, circled and underlined thricely on the calendar. In the "Me Want" folder are lists and graphs and drawings, updated weekly.

Yet, here it is, a month-and-a-half after my birthday, and I'm showing more birthday-money baseball cards. What happened?

Nothing special. You see, there is this nifty online feature in which you can order cards you want and then -- oops, I ran out of money to get them. And then there they sit, in their tiny little shopping cart, poking fun at you.

I finally found the cash to shut them up, and after a sound scolding, they are now here, docile and ready to dazzle you.

These are the very last birthday cash items, so they're basically cards I picked up with whatever was leftover. But those are some of the best kinds of purchases, as you'll see. 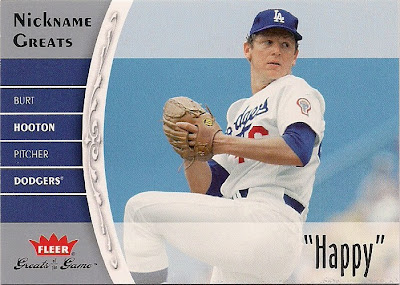 I'll start with one of the terrific nickname cards from 2006 Fleer Greats of the Game. I'm "happy" to finally get to work on finding some of these inserts, "happy" to be holding this card in my hands, and "happy" to relay that I am certain the somber-faced Burt Hooton wanted to punch Tommy Lasorda in the gut for nicknaming him "Happy." 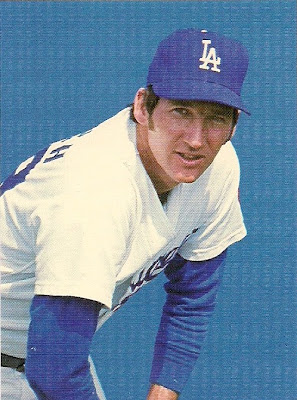 My last round of birthday purchases took a detour into Oddball Land. This is a Charlie Hough card from the 1979 Dodger Blue set, only my second card from this set. These cards are fantastic. 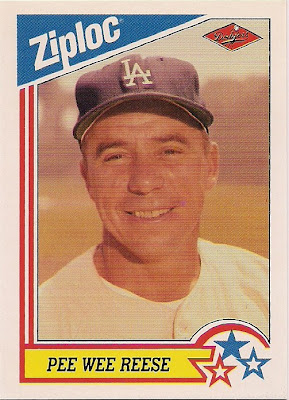 How often do you get to cross off the very last item on your want list? That doesn't happen every day, or even every year. That is why I cherish this 1992 Ziploc Pee Wee card so much. There aren't many cards manufactured by Dow Chemicals (or maybe there is -- who knows what cards are made out of today?). But this one was. 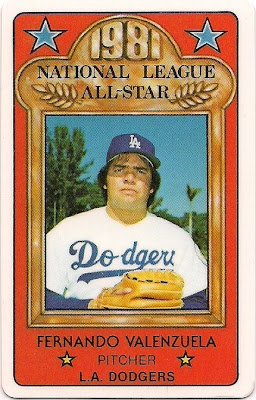 The first time I was aware of baseball cards that looked like credit cards was when I saw this ad in Baseball Cards Magazine: 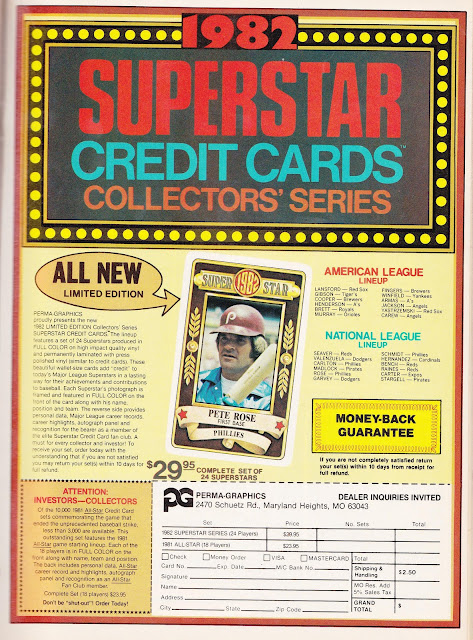 Oh, I wanted these things bad. You don't understand what it was like to be a youth with only three different card brands from which to choose. No Allen & Ginter. No Chrome. No diamond parallels. No unlicensed rogue cards. So when somebody decided to laminate baseball player photos on credit card stock, I was entranced.

Unfortunately, it took me 30 years to finally own one of these in person.

And now that I have one, I admit the card's a little underwhelming.

But the back of the card says "the bearer of this card is a certified loyal fan and is entitled to all enduring rights and privileges."

That's still got to be good for something. 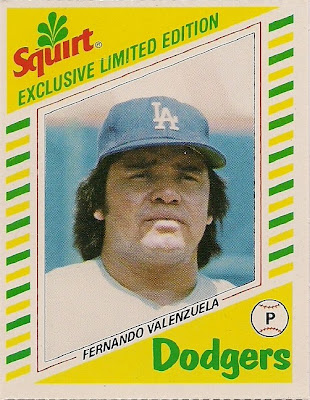 More Fernando oddball-ness from 1982. It's another item I've wanted since I was a teenager. But Squirt never made it into my home. My mom probably thought my brothers and I were going to spray it all over everyone. Like we were that impressionable ... or that literal.

I just wanted the cards, man.

These cards are remarkably flimsy, and now that I look at it, it's probably not going to be able to fit into a 9-pocket page. Damn. 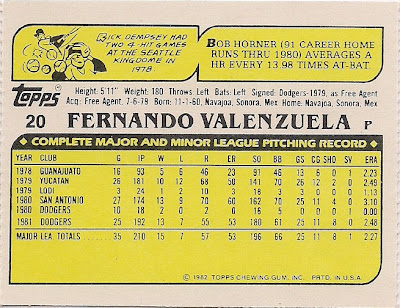 But the back makes me forget that. You all know the backs of 1982 cards to be green (or red, as in the case of the '82 Traded set). But this is yellow! Different is crazy! 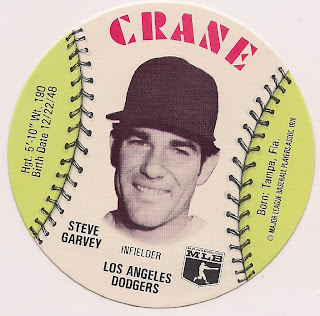 Not done with the oddballs yet.

I had been searching for the 1976 SSPC Dodgers that I needed, but didn't get very far. That's because I saw great items like this Garvey Crane potato chips "card" and was promptly derailed.

This card arrived much larger than I thought it would be. I'm used to the smaller disc items that would come packaged with wiffle ball bats. This is going to have to go in the same box with the Fernando Squirt card, I fear. 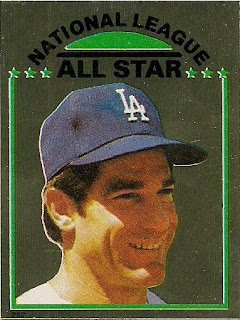 Yes. I bought a sticker online. I feel kind if weird about that.

But you know how it is -- you think you have ALL of the Dodger stickers from 1981 and then Garvey's shiny profile pops up in a manner that is entirely new to you and you're clicking on the "cart" button before you are aware that you're doing it. It makes the voices go away. 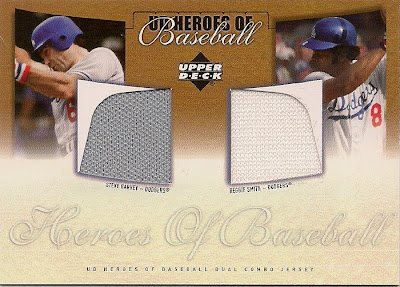 This might be the worst-designed, worst-looking, ugliest dual relic card I have ever seen. But I had to have it.

If you're a Dodger fan from the '70s, then you know the famous locker room fight between Don Sutton and Steve Garvey in 1978. The fight arose because of statements Sutton made, saying that Garvey was overrated and that Reggie Smith was the player that really made the Dodgers go.

So how great is it to have Garvey and Smith on the same relic card????

If only Upper Deck placed Sutton on there, too, it would have won my eternal gratitude. No more making fun of UD on the blog. Missed your chance, Upper Deck.

OK, those cards were merely to get you here.

The following card is the real deal.

The last of the birthday loot ...

One of the greatest cards ever made ...

I should have it on a poster in every room in the house ...

It should be in my blog header ...

It should be on billboards in every county in the country ...

It should be every citizen's cell phone wallpaper ...

It is the answer to every right-thinking baseball fan's prayers ....

It is worth 10 consecutive sentences with ellipses at the end ... 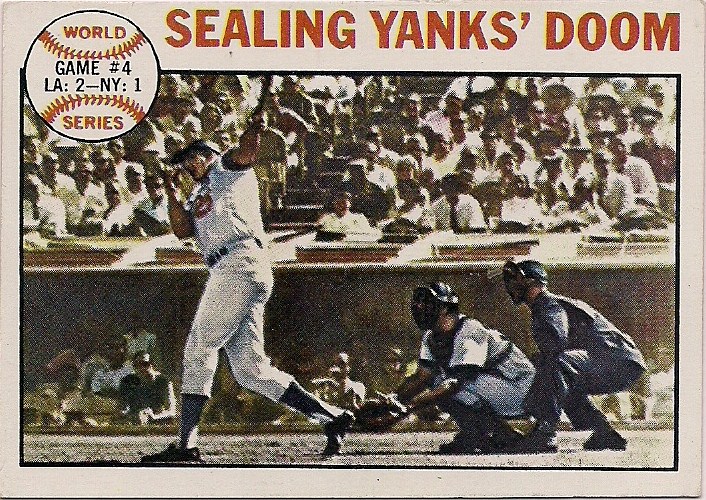 Why on earth has it taken me so long to get this card?

I can't sit around looking at pretty pictures all night.

But I think I did pretty good with my birthday loot.

It's a shame I have to wait so long for my birthday to come around again. But rest assured, the date is already circled and underlined, and I already know what I want. I always know what I want.


(P.S.: If you inferred something else from the post title, take your inferrer into the shop to be fixed. This is a card blog).

Stealing Home said…
i'm curious about what you said concerning the fernando squirt card. you said it's too big to fit in a binder page? i have the same card, but it fits just fine. mine is standard card size. is yours much larger? if anything, mine is a quarter inch shorter in height.

also..ur coup de gras card..NIIIIICE !! im chasing that subset. keep me in mind if a dupe ever comes your way. ;)

gcrl said…
pretty sure that reggie/garv dual relic was designed to be a dual auto also, except that i've never seen one signed!
August 28, 2012 at 8:23 PM

That card really is worth ten ellipses...

Especially since after losing that series they lost one more series in 1964 and then went into the Dismal Years.