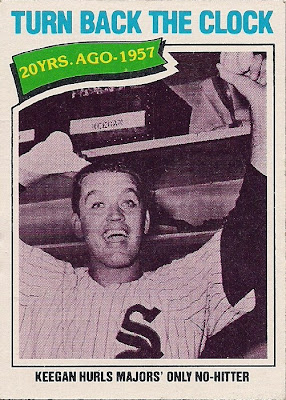 I think I've addressed the reasons that I collect about a couple dozen times on this blog, both directly and indirectly.

For instance, there is this card here of someone named Bob Keegan. Topps tells me that he hurled the majors' only no-hitter in 1957.

I never knew that until I received a bunch of 1977 Topps cards from Josh D. at Royals and Randoms. Somehow this particular Turn Back the Clock card in the '77 set had eluded me. I knew all about Ralph Kiner in 1952, Maury Wills in 1962, Carl Yastrzemski in 1967 and Nate Colbert in 1972.

But Keegan? Not a clue. Never saw the card.

So, 35 years after I could've known who Keegan was, I am now finally figuring it out. He was a pitcher for the Chicago White Sox who no-hit the Senators in the second game of a doubleheader on Aug. 20, 1957. It came near the end of his six-year major league career. Keegan would be an All-Star for the White Sox in 1954, but never have that kind of success again.

All of this information -- every speck of what I wrote in the last paragraph -- is totally new to me. And I owe it all to this card.

And people call this hobby a waste of time. Shame on them. 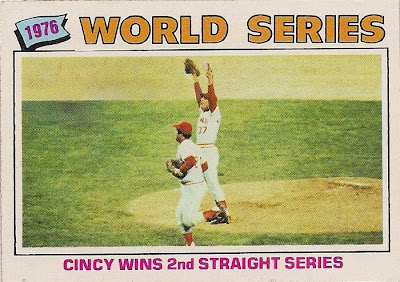 So, yeah, I collect so I can learn.

I also collect so I can remember. I like remembering. The good stuff anyway. I try not to remember the bad stuff.

The Reds winning the World Series in 1976 was bad stuff. It was one of two times that I can ever recall rooting for the Yankees. But the Reds swept them. I wasn't happy.

But it's all very vague. I can remember some shadowy, black-and-white image of Johnny Bench rounding the bases on my parents' TV in the corner of the living room. It's my first memory of a live moment from a World Series game.

So that's what this card does: makes me remember my first taste of live, World Series baseball. It turns a "bad stuff" moment into a "good stuff" moment. 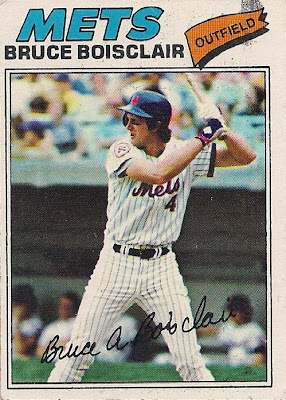 I collect to develop weird attachments to unspectacular baseball players. I am not a star chaser. I prefer to focus on the lesser known player.

I knew Bruce Boisclair as this guy who always wore eye black. It looked cool. Both on TV and on cards. So everyone else could fall over themselves about Seaver or Kingman. I was following Boisclair and Vail and Hodges.

Cards helped me do this. Those cards are called "commons," although I don't know if we called them that back in '77. But it's why I still collect sets. Because I like collecting commons. Anyone can collect stars. 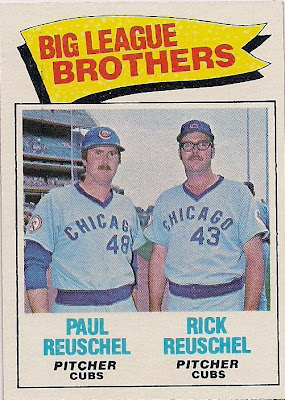 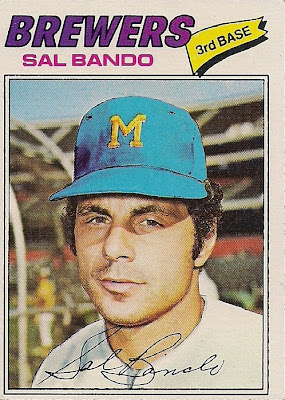 I collect to amuse myself. The Reuschels couldn't possibly be baseball pitchers, no matter what Topps says. And Sal Bando looks like a character in Welcome Back, Kotter. An airbrushed character in Kotter. 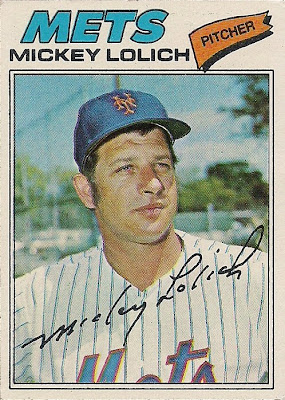 I collect for the "oh, wow" moments.

Mickey Lolich in a Mets uniform. 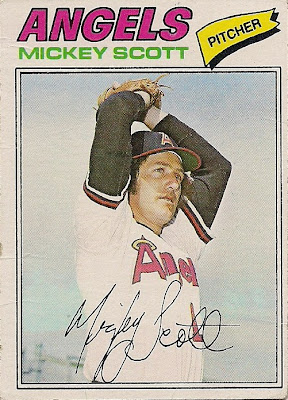 Mickey Scott, the guy who lived in my hometown. 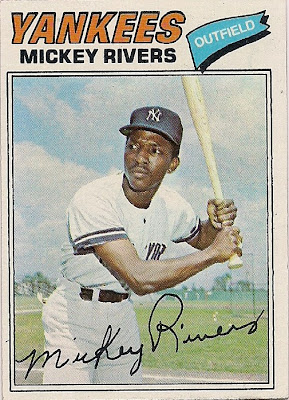 Mickey Rivers, the slowest walker to the plate I have ever seen. 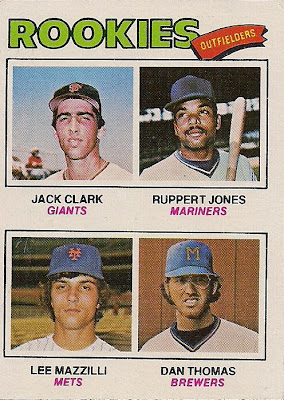 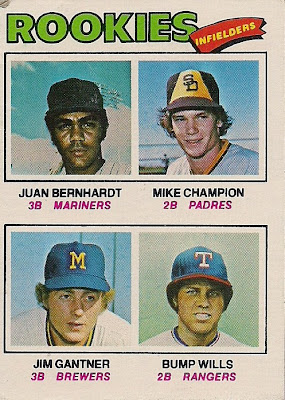 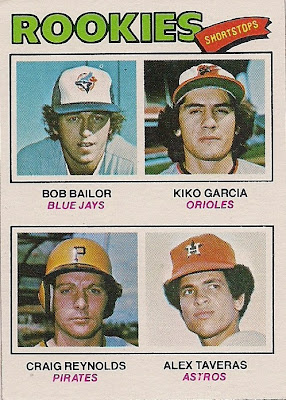 I collect to keep myself in touch with my inner child collector.

The last time I saw each of these cards, they were cut up into quarters, creating a tidy stack of super-tiny baseball cards. That's what I did when I was 11 years old.

Yup, I cut up rookie cards of Jack Clark, Rupert Jones, Bump Wills and Lee Mazzilli because I wanted my ballplayers on even tinier images than 2 1/2-by-3 1/2 rectangles of cardboard.

It seems strange to me now. But I like staying in touch with my childhood. Not enough people do that. 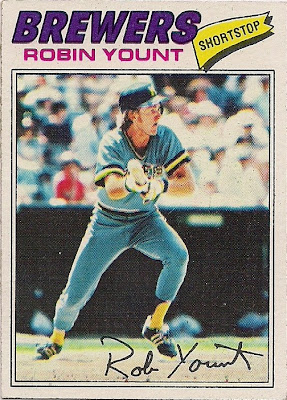 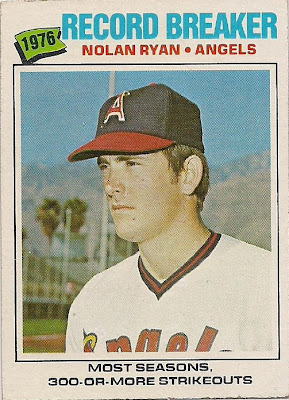 I collect to obtain cool cards of cool players. I may like the common guy, but I'm not above bursting with pride because I have a few Hall of Famers in my collection. Collecting is about boasting, and I've done my fair share on this blog. 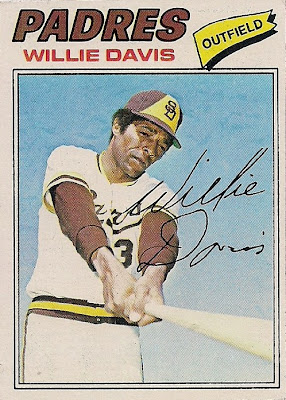 I collect to honor in my own way the legacy of great players. Writing about them is one way to recognize their legacy. But by collecting photos of these players, I am keeping their memory alive in my mind, and hopefully letting others know, too, that Willie Davis was fantastic player. 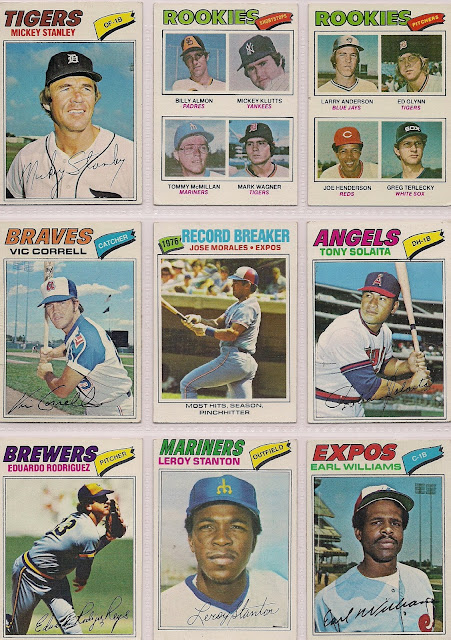 And, of course, I collect because I like sorting and organizing and completing. I wouldn't say I'm obsessed over it. But who knows what I would be doing if cards didn't exist? Would I be one of those weird people that has to make sure all the containers in the refrigerator are facing the same way? 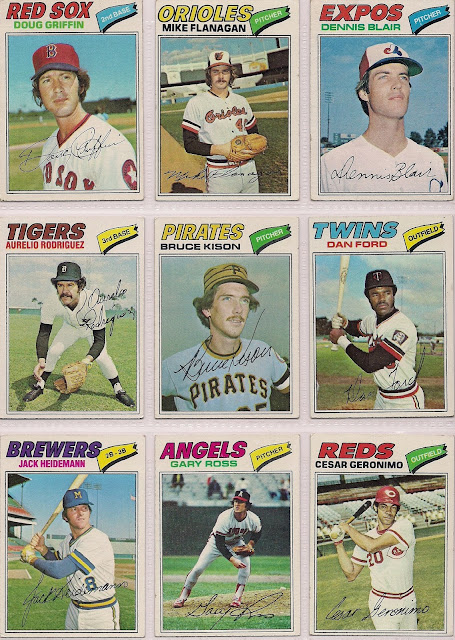 Completing a set is the most fun I have in collecting. 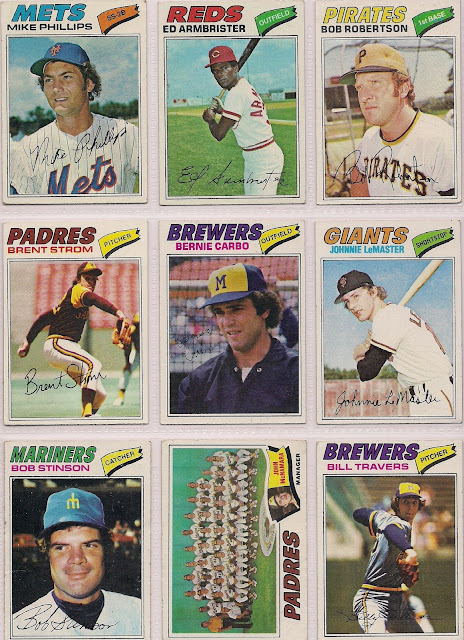 The process of working toward a goal and making discoveries along the way ... 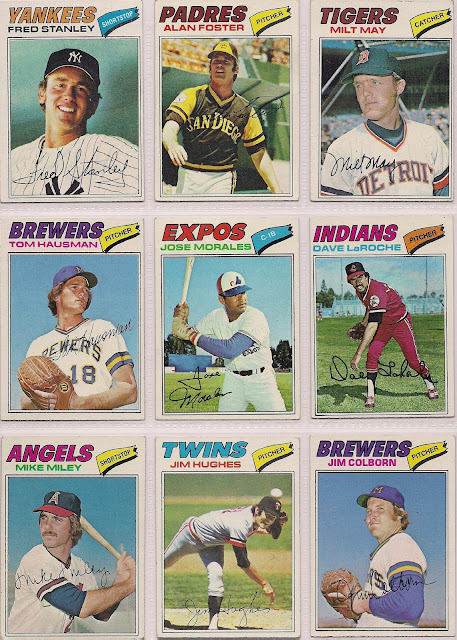 ... makes me want to finish off sets over and over again. 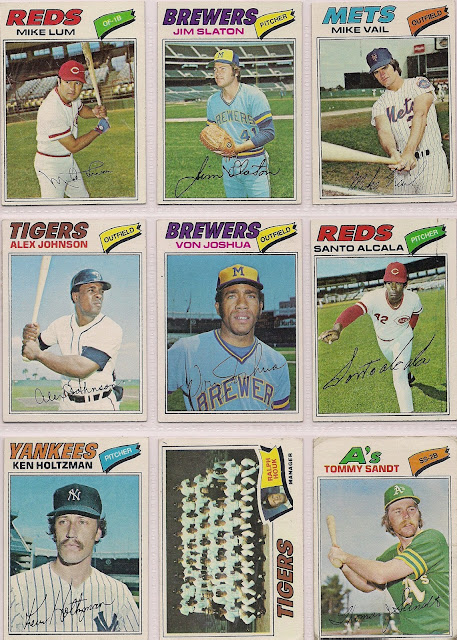 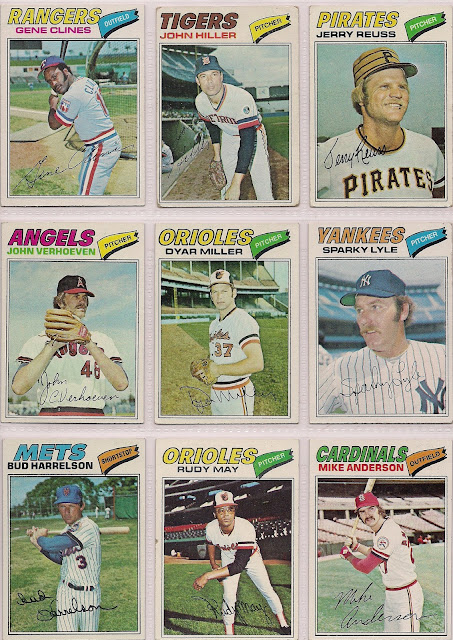 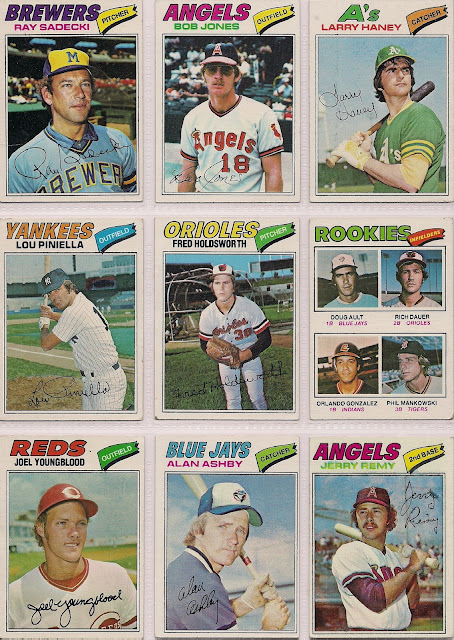 This is why I collect, too. I need to be a part of that. 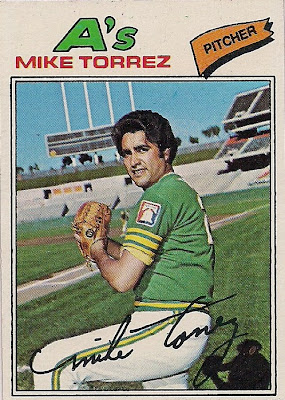 So, thanks, Josh D. and Fuji, for helping me illustrate why I collect.

The reasons aren't very original. And it's nothing I haven't said dozens of times before. And, good gosh, Mike Torrez has some fantastic hair.

But it needs to be repeated every once in awhile.

I collect because it's fun.

runfore!kelloggs baseball cards said…
Another nice read. Brothers Paul and Rick looked a lot better in this picture than when playing.

I know Rick played for a long time, but you probably wouldn't believe that he used to pinch-run a lot. How do you tell your kids that this guy pinch-ran for you?
August 1, 2012 at 5:56 AM

Chris Stufflestreet said…
I'm pretty sure the captions on the Reuschel card is reversed. Paul wore the glasses, Rick did not. But they look they're on a bowling team...not a professional baseball squad.
August 1, 2012 at 9:16 AM

Josh D. said…
I hope your scanner isn't overheating after that post. :-)

Zayden said…
Man that was a great read! I collect for most of those same reasons too! I'm not really a set builder as of yet, cuz well the money just ain't there, but I really have a certain respect for those that do because it's just gotta be tough to complete any set for that matter. Props on the Mets cards too!!!
August 1, 2012 at 2:05 PM

The Baseball Card Snob said…
77 Topps, one of my fav sets. I remember buying tons of packs. I was 13 at the time and packs were cheap then.

Anyways... great post. As cardboard collectors we may have a lot of similar reasons for collecting, but I know I definitely wasn't as creative in my presentation of the information.

Look at them...the shadow, the hair, the two identical poles coming out of their heads.....something fishy is up there. Too much going on to just be a coincidence.
August 3, 2012 at 4:55 PM