Popular topics: Playing for the enemy 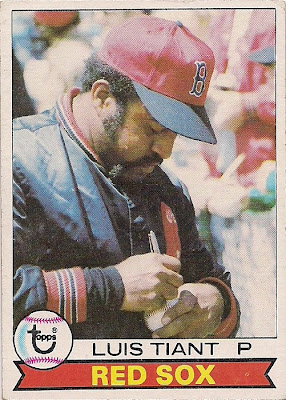 It's a much loved, much awkward commercial of Tiant hawking propaganda hot dogs for his new team, the New York Yankees. Plenty of people remember it, yet finding it online is impossible. But just to give you an idea what it was like, here's another Tiant commercial pitch man atrocity:

And you think commercials are bad on TV now?

Anyway, the point is I'm looking at a Red Sox card and thinking about the Yankees. It was very strange back in 1979 to see Tiant, who was known and loved as a quirky, yet effective Red Sox pitcher, spinning and pivoting on the mound for the Yankees. 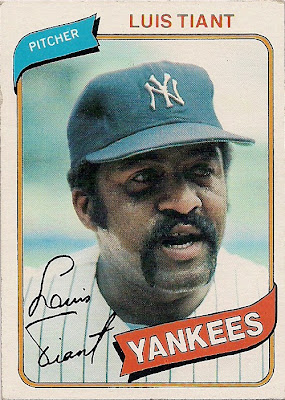 In a house full of Red Sox fans and Yankee haters, we were disgusted with Looooie.

But the scene would play out again and again with other players going from the Red Sox to the Yankees ... or the Yankees to the Red Sox. And each time, it would be a shock to the system. Seeing Butch Hobson, who I thought would be a star for years for Boston, as a washed-up has-been in PINSTRIPES, was almost horrifying.

Playing for the enemy is such an interesting topic to devoted fans that lists of players who have competed for both the Red Sox and Yankees, or the Mets and Yankees, or the Dodgers and Giants, or the Cardinals and Cubs, can be found with a couple of pecks on the keyboard.

And I'm sure a number of people have researched their all-time team for such a category of player. Some have probably been quite thorough at it, mentioning that Jack Chesbro and Herb Pennock and Everett Scott each have played for the Red Sox and Yankees.

Well, I'm not going to be that thorough. The players that I am interested in are the players that switched from the Red Sox to the Yankees, or vice versa, while I was watching baseball. Which of these players made the biggest impact on me? Because, you know, this blog is about me.

So, although Babe Ruth is the most famous player to compete for the Red Sox and Yankees, he's not going to make my team, because he died decades before I was born. Same goes for other notables like Red Ruffing and Elston Howard.

So here's a look at my all-time Playing For the Enemy Team (Red Sox-Yankees Edition): 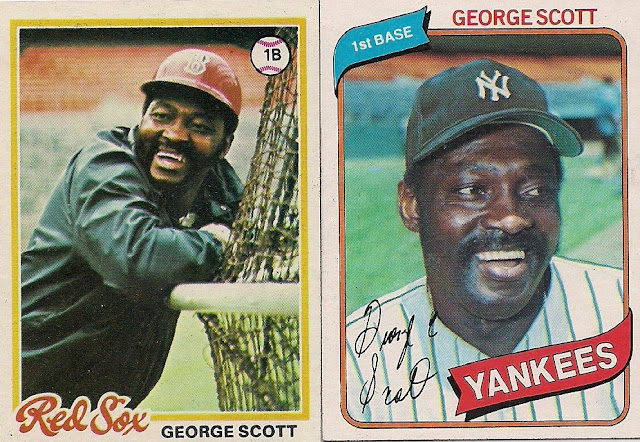 Scott switched from the Red Sox to the Yankees during a period when it seemed like there was a new player jumping between the teams almost every month. So this change barely registered with me. Also, Scott had a stint with the Royals between the Red Sox and Yankees. And it helped that his time with the Yankees was very short.

This is a tough position. There just haven't been a lot of notable middle infielders who have played for both teams. Bellhorn barely played for the Yankees, but it's all I could find from during the period when I was following baseball.

I don't own a Yankee Owen card, so no picture. But another position where there are few candidates. I guess it's because like any good arms race, both sides are bent on getting the biggest and best weapons. The Red Sox and Yankees are all about sluggers. Who cares about catching the ball? 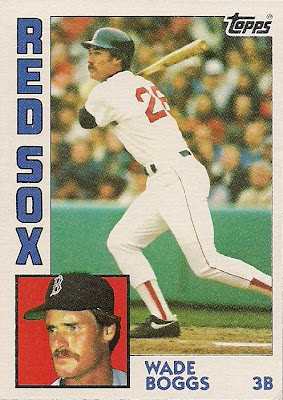 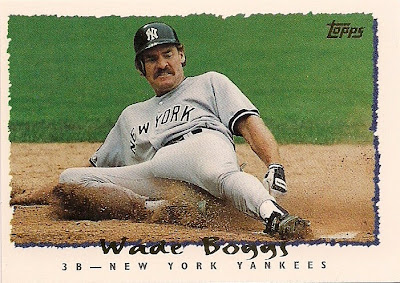 Boggs was always a little odd when he played for the Red Sox. If you didn't know that through all the chicken stories, then Margo Adams pretty much settled the argument for everyone.

But Boggs was our weirdo. Until he decided to sign with the Yankees. And then he was that demented, money-hungry freak. I never liked Boggs after he became a Yankee. Still don't. 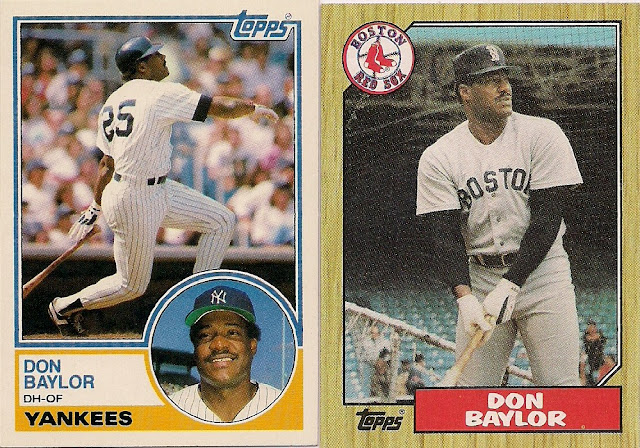 When a player moved from the Yankees to the Red Sox, it wasn't nearly as upsetting. In fact, it was funny in a "ha, ha, we stole your player kind of way."

That's the way it was with Don Baylor, although I can't remember Baylor with the Red Sox much at all. 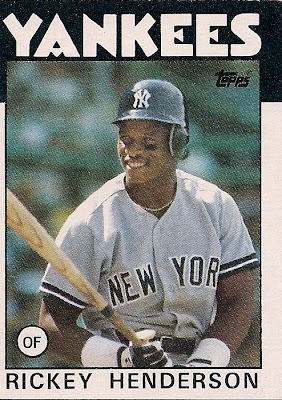 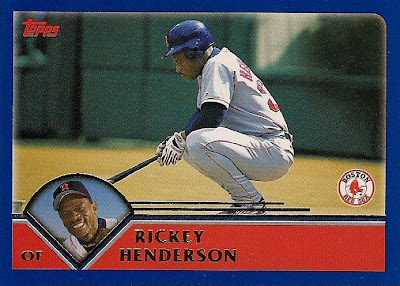 Rickey Henderson never saw a team he didn't like. It's hard for me to identify him with any team. He's one of the few players who can rise above the "He's a Yankee" or "He's a Red Sox" argument. ... Then again, I don't know if that's a good thing. 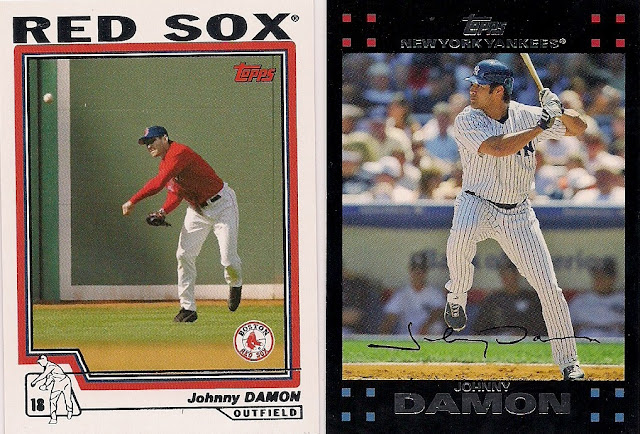 Look, the cards are repelling each other!

Johnny Damon's switch from the Red Sox to the Yankees is on par with Boggs' traitorous turn. But by this time, I was wise to players' dismissal of fan loyalties, and looked at it in the way I probably should have all along -- as just a player finding an opportunity to make himself more comfortable.

But damn, it was still annoying for most of the 2006 season. 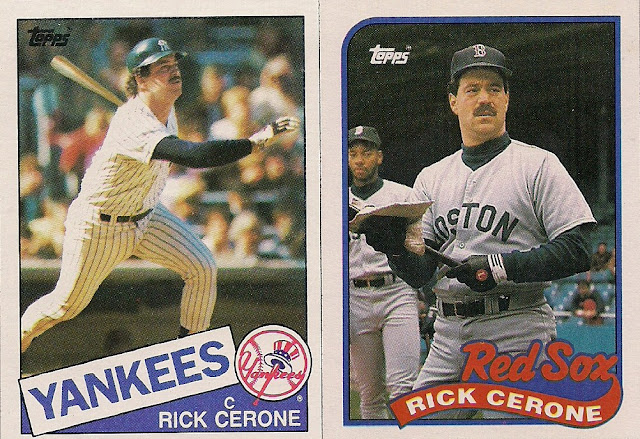 Rick Cerone was a darling among Yankee announcers, especially Phil Rizzuto. Cerone didn't hit much but he was praised like he was a superstar, which made it all the more irksome for a Yankee-hater like me. "OPEN YOUR EYES! HE'S HITTING .223!!!!" 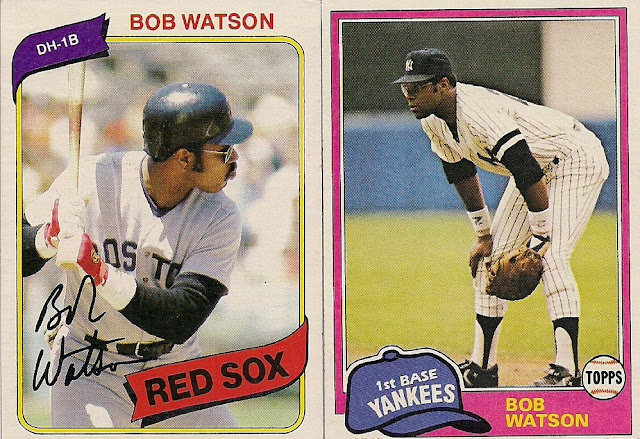 Bob Watson hit SO well when he played for the Red Sox in 1979 that I remember being disgusted when the Red Sox granted him free agency and the Yankees picked him up. Later Watson would play against the Dodgers in the World Series and I found new reasons to prick my Bob Watson voodoo doll. 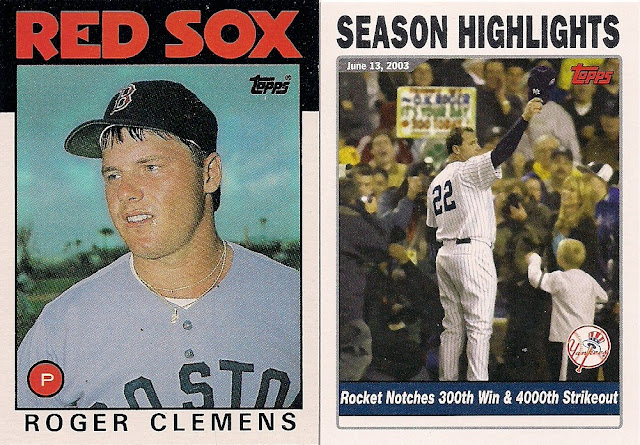 Clemens probably was always fond of himself, but it appeared much more obvious with the Yankees. I'm sure there was a time period back in the late '80s when I liked Clemens. But I can't remember feeling that way at all -- not with everything that has transpired. 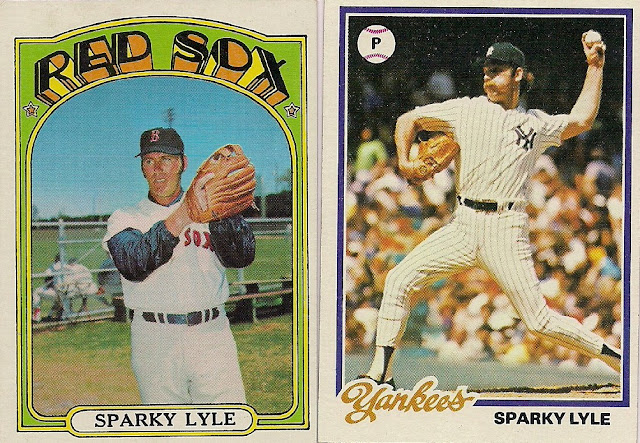 It was the first time that I was aware that a player could be both things. A Red Sox and a Yankee.

And here's the team without all the extra words:

I'm sure I've missed a number of people. But I tried to stay with the players that made the biggest impact on me with their switch from team-to-team. If I didn't think of them, then they probably didn't make an impact.

I suppose this post is my contribution to the oversaturation of everything Red Sox and Yankees. But it didn't used to be that way. There used to be a time when the Red Sox were good and the Yankees were evil and everything operated in our own little corner of the country. And that's why seeing one player with both teams was so weird, and interesting.

Today, it doesn't mean a lot. Such is life in an increasingly transient society.

But I'll always remember seeing Luis Tiant saying "eets great to be with a weener" on that commercial, and thinking "he should be saying that with a Fenway Frank!"

Duane said…
I had to check out John Olerud's career just to verify that he played on the yanks and soxs.... I had no recollection of that.... which is good because it gave me a chance to refresh my memory of just how good he was..... 17 yrs with a .398 career OBP... plus great defense.... really an all time great....just shy of hall worthy but much better than most folks probably realize
August 30, 2012 at 5:42 AM

Classon Ave said…
The fact Elston Howard ended up in Boston has always really upset me, at least as much as something that happened a decade before you were born can upset you.

jacobmrley said…
Elston Howard's 1968 Topps card still kind of wigs me out and I'm a Red Sox fan. He just looks odd in a Sox uni.

When Jeter was a free agent a couple of years ago, I held the theory that the Sox should have offered him a 4 year $160 million contract, just something obscene. The idea of Jeter ending his career on the Sox is so ludicrous but would be so delicious on a few levels. One, it would expose the player's union as money grubbing scumbags. Two, it would humiliate the Yankees and their fans. Or, three, it would have cause the Yankees to spend $25 million more dollars than they wanted to on an old shortstop. Sometimes spite wins out over business sense in my world. Alas, the Red Sox did not share my vision.
August 30, 2012 at 6:23 PM

night owl said…
@The Baseball Card Snob: Yes. I was practicing what it would be like to talk like an agent.

Unknown said…
No wonder why the Red Sox and Yankees hate each other. Other than Lou Brock, you don't see a lot of Cards/Cubs trades or free agency.
August 31, 2012 at 12:51 AM